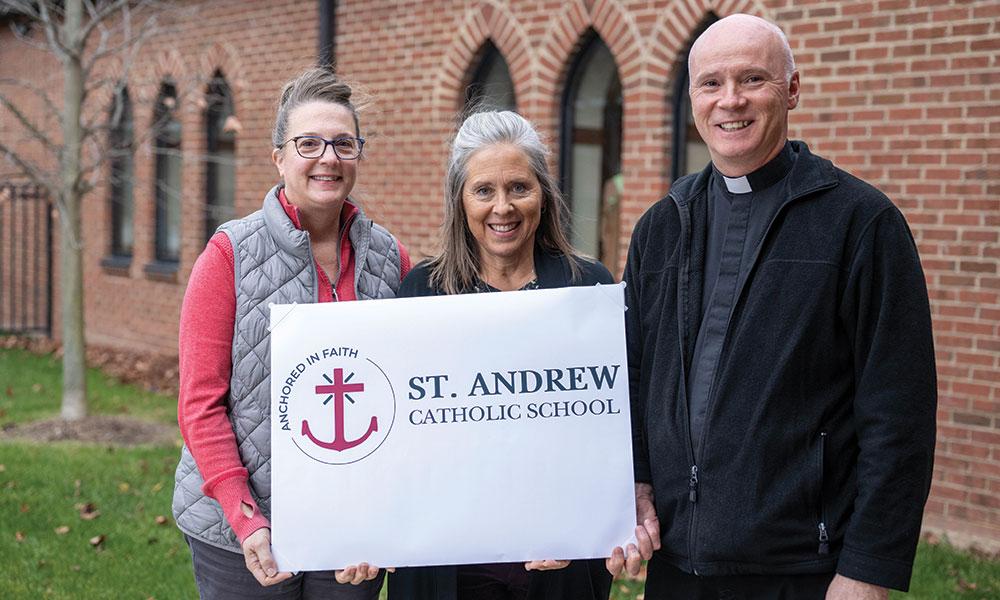 The Beginning of Knowledge

In a National Climate of Merging Parishes and Closing Catholic Schools, St. Andrew Parish in Saline is Casting Its Nets Out in Faith

This past November, the parish began enrolling preschool through sixth-grade students in its new school, set to open in the 2023-24 school year. It will be the first new parish school in the Diocese of Lansing in 20 years, and it eventually plans to serve grades PreK-8.

“We realized we have something we can give that secular (schools) can’t,” says Father John Linden, pastor of St. Andrew since 2019. “And people want it. People want virtue; there’s a great desire for our children to be more than just making a good career for themselves in the world.”

In some ways, the foundation for the school has been in place for over a decade — literally. The parish’s 2011 building addition included classrooms, all up to school specifications. So far, they’ve been put to good use by the parish’s religious education, youth ministry and adult faith formation programs, as well as by community groups like the Boy Scouts.

Saline, which Father John describes as a bedroom community of new housing developments filling with families not originally from the area, boasts high-ranking public schools. But the area is vastly underserved by Catholic schools, with St. Francis and St. Thomas the Apostle in Ann Arbor about a 25-minute drive north — and frequently with packed waiting lists. To the south and west, the closest Catholic school is Sacred Heart in Hudson, 45 miles away.

“This is building a community,” Father John says. St. Andrew will have a unique evangelizing opportunity in a town burgeoning with new transplants. The parish itself, with nearly 1,800 households, is growing too, especially since the decision to open the school was announced last July. Father John said that eight families recently registered within a single week.

What distinctive presence can St. Andrew bring in that scenario?

“We’re the leaven, bringing the light of Christ into the community,” says Janet Cook, who runs the parish’s religious formation programs and will also direct St. Andrew’s Preschool.

“We’re going to value the whole of these children,” Father John adds. “They’re not just oriented for the world and how they can get ahead in the world, but for the kingdom of God. We’re going to work on, ‘What is the purpose of my life? How am I the image of God in the world?’”

Michelle Sontag, the school’s principal and director of opening, cuts to the heart: “Christ is not an add-on to the educational model. He is the center.”

Integral to that vision is St. Andrew School’s four areas of formation: human, spiritual, apostolic and intellectual. Those categories are ordered purposefully, Father John said, beginning with integrating the virtues into our daily lives, developing a relationship with Jesus and learning to carry that into the world. Intellectual formation, only one aspect of nurturing a student’s development, serves the rest.

Michelle looks forward to introducing the students to different virtues every week and to practicing the works of mercy as a school — from kindergarteners collecting canned goods for a food pantry, to older classes forming pen pal relationships with patients in nursing homes. The entire school will gather on Fridays for Mass and participate in weekly adoration.

This isn’t the first time Michelle’s been at the helm of a daunting school project. Ten years ago, she actively engaged and oversaw the merging of three Catholic elementary schools in Monroe. Then, the challenge was to bring three distinct school cultures into a unified whole. Now, she said, she’s excited to build St. Andrew School’s culture from the ground up.

The St. Andrew team seeks to create that culture intentionally — “Anchored in Faith,” as the school motto proclaims, an homage to its patron saint, who was a fisherman and the first apostle. They also recognize the temptation to see this undertaking as “circling the wagons,” or a retreat “to hide up on the hill,” Father John acknowledges.

“We never want to cultivate the attitude of, ‘We’re better than everyone else,’” Janet adds.

Her colleagues agree, and note that seeking to serve the common good, having gratitude for their opportunity and remembering their commission as disciples to share the Good News can temper that.

As Father John puts it, “We want our kids to know they’ve got to be out there, helping those who don’t get the opportunities they have to know Jesus.”