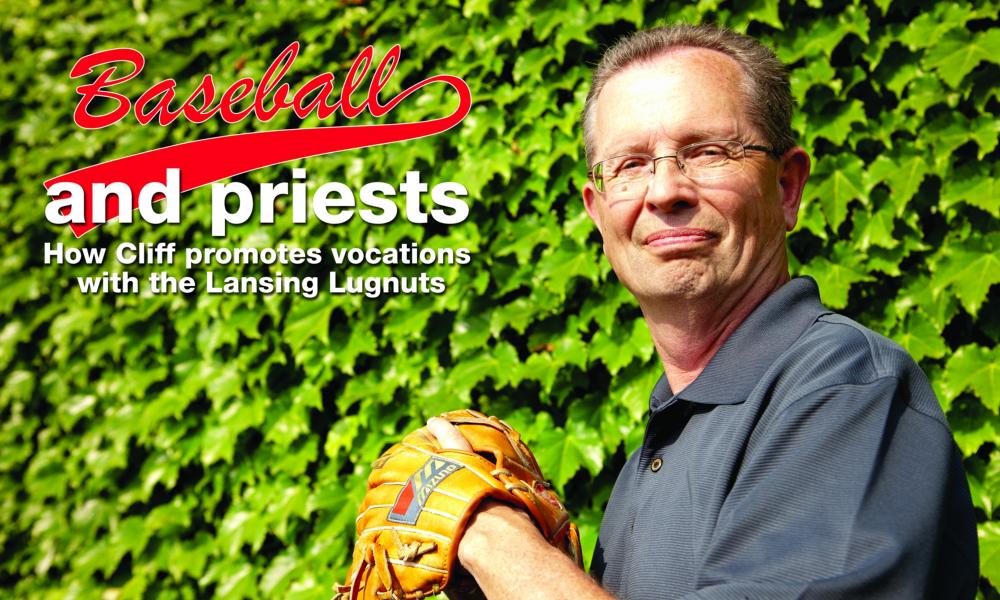 Clif Farr has been a baseball fan (spelled n-u-t) since he was a boy. Combine that with his enthusiasm for his faith and you get an unusual night at the ballpark every year.

This year it will be Aug. 17, when the Lansing Lugnuts host the Fort Wayne Tincaps. From the ceremonial first pitch at 7:05 p.m. by Bishop Boyea, to the fireworks display following the game, there will be a lot of Catholicism mixed in with the baseball.

The night is a cooperative effort between the Lugnuts and the diocesan Knights of Columbus. Cliff, who has organized the event since 1999, said, “The original, and still primary, intent is to promote vocations. Our council, St. Mary Cathedral #11694, decided that we needed an organized event in the diocese that allows everyone to participate in a public display of our Catholicism.

“Most of all it’s fun. With priests in collars, sisters, postulants and novices in habits, and seminarians being identified, it presents a positive identity. It gets people more aware of vocations, and provides a contrast to the way some people may picture Catholics.”

Between innings, the scoreboard will scroll the names of all seminarians and the names and religious order of sisters in attendance. The knights will be recognized by council, chaplain, and grand knight.

The first year, the game drew 625 Catholic fans; eventually the number reached 2,600, in addition to the regular Friday night crowd of around 8,000. Cliff is planning a You Tube promotional video this year to boost attendance.

Cliff credits his council for doing much of the work, as well as his wife, Helen, and sons, Cliff and John. He loves organizing the game and seeing the fans, but because he is usually visiting and working during the game, he estimates that he has watched less than 50 pitches in the 13 years.

In the not too distant past, Cliff wouldn’t have devoted so much time to the game and other Knights’ activities, let alone to his faith. “I always attended Mass, even in my teens and 20s,” he said, “though I wouldn’t have called myself a convinced Catholic. Later, I developed an interest in discovering authentic Catholic teaching and separating that from the confusion being taught by some in the ’60’s to the ’80’s.

“What I learned turned out to have value after my sister, Juliann, told me she had been studying with the Jehovah’s Witnesses. I was able to answer some of her questions about Catholicism; however, I didn’t know enough, so I would visit my parish priest, Msgr. James Murray (later the bishop of Kalamazoo), during lunch hours to get her questions answered.

“The benefit for me, of course, was that I learned more about Catholicism, and it all made sense. My sister came back to the Church eventually and now runs the Marian Peace Center in Petoskey with her husband. Knowing more about the faith also enabled me to help my dad become Catholic two years before he died.”

Cliff said that the gift of Catholicism means everything to him: “The truth of what the Church teaches gives me a foundation for all I do and for all of my decisions in life; without it I wouldn’t be doing most of what I do for others. The impact that the Church has on our world through charity, in business, education, science, medicine and more is fantastic.”

Cliff’s enthusiasm for the Church spills over to the K of C: “When I discovered the Knights, I found an organization I didn’t know I was looking for,” he said. “Am I glad I did! It is a great tool for doing good. I might have wonderful ideas and a willingness to work, but, without a network for implementation, I would be stymied. There is no better fraternal organization on earth. Its work with the Church, family, youth and community is exemplary. I can’t help think about all that we could do with more members.”

In past years, Cliff has been the grand knight of his council, the diocesan program director and the state vocations director. Besides the baseball game, he is involved in several other activities, most through his council: The Albers Trust Fund for Diocesan Vocations, the Bishop’s Golf Classic, Junior Cougar Catholic Youth Golf League, the annual drive for the mentally impaired and, naturally, pancake breakfasts.

Besides raising funds or awareness of vocations through the Lugnuts game and the golf classic, diocesan councils contribute $500 to a seminarian or a novice/postulant each year.

So to Cliff, the Knights are perfect for promoting vocations through the baseball game. “It’s obvious that strong vocations are critical to bringing happiness to all of us in this world and for leading us to the next,” he said.

The game is a plus for the Lugnuts, too, a class A minor league affiliate of the Toronto Blue Jays. Assistant General Manager Nick Grueser said “it is a good community partnership for us, and we are able to help the Knights spread the word about faith.”

Grueser enjoys working with Cliff and calls him “one of the hardest-working and most faith-based guys I have met. He must spend all of his waking time volunteering when not at MDOT, [Cliff is a civil engineer with the Michigan Department of Transportation]. He has the best of intentions and a great heart. I have jokingly asked him to come work with me.”

Some of the attractions for Catholics attending the game will be the singing of ‘God bless America’ by Father Bill Lugger of St. Casimir Parish, and the national anthem by Father Lugger and the Singing Knights, with the Knights of Columbus Color Corps. The St. Thomas Aquinas Parish choir will sing “America the Beautiful” during the seventh-inning stretch.

A highlight for Cliff is that, through the generosity of the Knights, more than 200 children from St. Louis Center in Chelsea, St. Vincent Catholic Charities and Holy Cross Children’s Services attend the game. He also recognizes corporate sponsors Kellie Dean of Dean Transportation/Dean Trailways and Doug Bushard at Aldinger, Inc., as big factors in the success of the evening.

Cliff remembers the year that Father John Fain, newly ordained, was manning the vocations table. After the game, he told Cliff, “Nobody asked specifically about vocations, but I did have people ask how they could come back to the Church.” Cliff said that always will be a defining moment of this event for him.