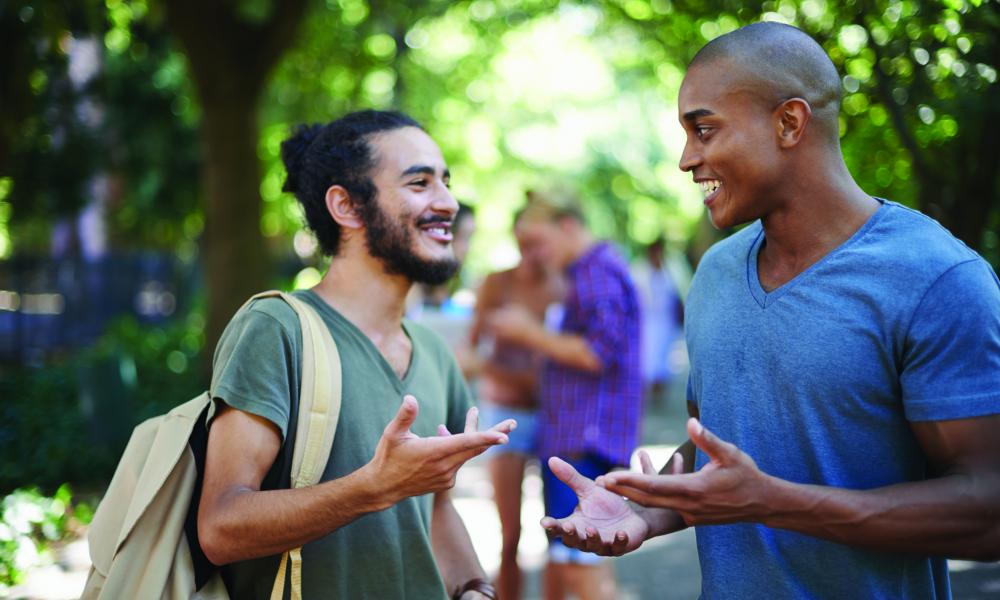 Dear Fr. Joe: Whenever I hear people talking about apologetics, I get confused. It sounds like apologizing, and I don’t think we need to apologize for our faith! What am I misunderstanding?

First, let’s define apologetics. It’s a tougher thing to do than you would think, because the word is flexible enough to be used in a few ways.

These days, when we say we are apologizing, what we are usually doing is asking someone’s forgiveness in an informal way: “I apologize for laughing when your team fumbled and my team scored.”

Believe it or not, its original usage was different: to apologize meant to explain one’s behavior or to defend oneself. In fact, the word ‘apology’ comes from the Greek word apologia, which means “speak in return, defend oneself.” The first time I heard of this was when I read Socrates’ Apology, which was his public defense at his trial for numerous charges. Socrates stepped forward, addressed each of their charges and explained why he was innocent, or, in some cases, why he was guilty, but why what he was guilty of was a good thing.

Over time, the usage of the word has evolved and, as I typed earlier, we tend in common speech to use it to mean, “I’m sorry.”

However, the original intent of the word has remained, and it is used in religious and philosophical schools. For example, we have what you probably ran into: Catholic apologetics.

So, what is Catholic apologetics? Defined loosely, it is an attempt to use reason, Scripture and tradition to defend the Catholic faith and/or teaching.

In 1 Peter 3:15-16, we see these words from our first pope: “Always be ready to give an explanation to anyone who asks you for a reason for your hope, but do it with gentleness and reverence, keeping your conscience clear, so that, when you are maligned, those who defame your good conduct in Christ may themselves be put to shame.”

We can and should use these words as a fuel to guide us into a deeper knowledge of what we believe and why we believe it.

With that in mind, my first challenge here is to grow in understanding our faith. There are so many resources out there that I dare say it would be a crazy thing for me to attempt to whittle it down into a list. Get on Google and type “Catholic apologetics.” Go to your library and look for good Catholic resources. Pick one topic and research it so that you can understand the reason we believe what we believe. In 1926, a noted Catholic apologist named G.K. Chesterton wrote “The difficulty explaining why I am Catholic is that there are 10,000 reasons all amounting to one reason: that Catholicism is true.” You’ll find that to be accurate once you dive in – our ancient faith is beautiful!

So, now you are “armed.” You have a deeper understanding of our faith and you are ready to defend that faith with your learning. In a sense, you have the “Why?” and now you are looking for the “How?”.

With the advancement of social media, our society has become much more combative than I remember us being in the past. Our social media feeds are filled with anger, criticism, virtue signaling and all sorts of noise.

Right now, if a person were to develop an interest in the Catholic faith and got onto Facebook or Twitter to see what Catholics are saying, they’d see a lot of Catholics posting about why Pope Francis is wrong or how priests are celebrating Mass wrong. They’ll observe a whole lot of complaining and anger, but not much love. In my opinion, we are our own worst enemy.

Apologists stay away from that complaining, nitpicking and angry world, because they understand that truth is strong and doesn’t need our manipulations or anger. People will move toward Catholicism because of the truth and beauty in it, not because we humiliated them, beat them down and/or argued better than them. This sort of virtuous behavior will in and of itself be a profound witness to those who have eyes to see and ears to hear.

A good Catholic apologist knows that love must be the only reason we engage in a discussion/argument about our faith. Share with those who ask out of genuine curiosity. Share with those who ask because they want to know. Walk away from the need to win and make sure you only engage out of love and/or because of love. In short, we don’t have to bite at every piece of bait thrown in front of us.

Always, always, always remember that truth is a person: Jesus Christ. We do not want to abuse truth or use it as a weapon to bludgeon people who irritate us. If someone asks questions and sincerely wants to know, meet them in that holy curiosity and bring truth with you. Share what you’ve learned with joy and good humor.

Let God do the rest – it will blow you away.