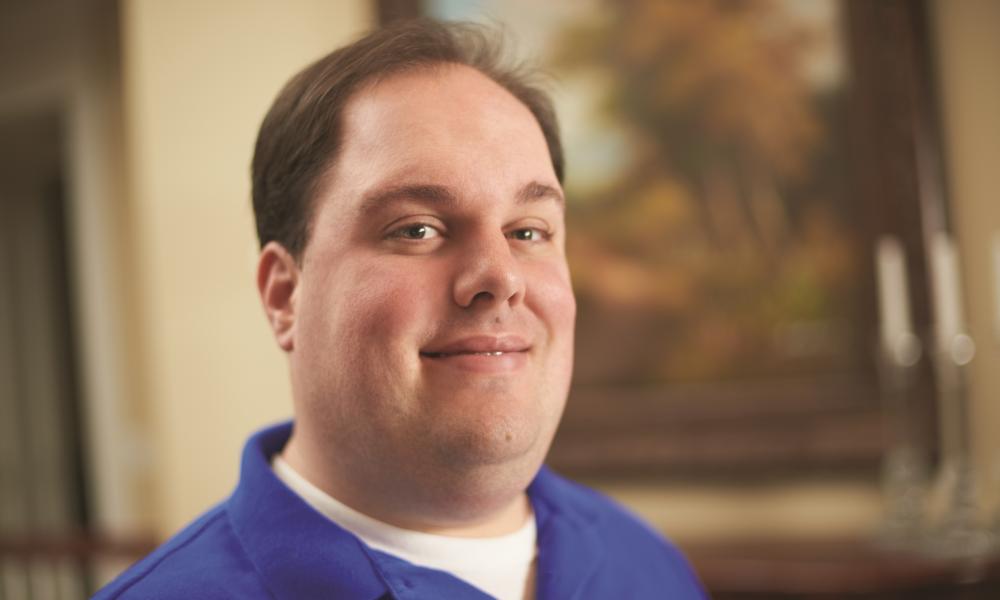 Anthony Stornant Collar is repeating lines from Disney movies and tasks from his to-do list as he circles the counters of his family kitchen. The room buzzes with Anthony’s chatter and the conversations of cousins and aunts preparing food for the open house they will soon host. At the heart of it all, Anthony’s mother, Stefeni, welcomes guests and guides the preparations for the open house exhibit featuring artwork and related products for Anthony’s business, Art of Autism.

The air crackles with excitement, but with plenty of helping hands to kick off the event, Stefeni takes a moment to share her son’s story.

“As a baby, Anthony was different from his older brother and sister. When I looked into his face, he would turn his eyes away as if he was unable to make the connection. I learned later that his entire nervous system is hypersensitive. Sight, sound, smell, taste and touch affected him so strongly that even eye contact was too much for him to handle. Also, he wasn’t speaking, unlike my first two children, so we decided to have him evaluated.

“When we got the final diagnosis on Anthony’s autism, I wasn’t surprised, but I was heartbroken for him. I always will remember my husband, Alonso, telling me that God will give us some very special angels to help us along our way. Sure enough, he was right. Angels have surrounded our family constantly since Anthony was diagnosed at age 2.

“His first teacher, Michelle Angell, has especially blessed our lives. On Anthony’s first day of school, he was crying because he didn’t want to be there. I was crying because I didn’t want to leave him. Mrs. Angell took Anthony’s hand, sat him down and gave him paper and a crayon while I looked on with my camera. I have a photo of him crying, then a photo of him drawing. The next photo is of Anthony handing Mrs. Angell his picture and smiling!

“From that moment, drawing became Anthony’s favorite method for calming, entertaining and self-expression. He carries his sketch book anywhere he might become over-stimulated or where he has to communicate with a world that focuses heavily on speech. He didn’t learn how to speak until about 4, and, to this day, Anthony’s conversation skills are very limited. When he says a full sentence, we all pay attention because we know he has something important to say.

“Anthony speaks through his art. His computer skills and IQ are off the charts, but people don’t always see that because of his difficulty communicating verbally. He draws his concepts with paper and pen then colors the pictures with Sharpie markers. Finally, he scans the images into his computer and edits them until they’re exactly as he envisioned. His world comes alive in his drawings.

“When I think about angels in Anthony’s life, I think of how his brothers and sisters – Alina, Alonso Jr. (Bonz), Ashleigh and Alexander – protect, love and care for him unconditionally. They read his body language and speak for him when he has no words. They hold his hand to protect him from danger, and push him to develop to his full potential. Our family always has stressed the importance of being the best you can be with the gifts and talents God has given you. We believe that when you put God first, there is nothing you can’t do. This is so true for Anthony as he continues to use his God-given talents to accomplish things in his life.

“My husband, Alonso often says he has two vocations: his family and his medical work. The love he has for his family keeps us connected in the good times and bad. He truly exemplifies the word ‘father,’ and Anthony is so blessed for this.

“I have always known that my vocation was motherhood. I think the greatest gift parents can give their children is the love they share for each other. I am forever grateful that Alonso is my husband and the father of my children. To be a mother, especially Anthony’s mother, is one of my life’s greatest gifts.

“Other angels in our life include our families – both of whom live close to us. I come from a family of 10 children, so Anthony always has aunts, uncles and cousins around. Alonso’s and my parents have played a huge part in our lives. One of Anthony’s first drawings shows Thanksgiving dinner with Mom and Dad at the head and all their kids and grandchildren seated along the sides of a very long table. Everyone is smiling.

“He loves to draw our family and friends gathered together. Whether we’re around a campfire, on the beach, in front of the fireplace at Christmas, it doesn’t matter. Everyone is happy being together. Happiness is Anthony’s essence and his gift to so many!

“Of course, life isn’t without trials. Six years ago, we lost our oldest son to brain cancer. Really, in times like that, God’s grace is all that gets your family through. As we stood around Bonz’s hospital bed, Anthony looked at us all and very clearly kept repeating, ‘Don’t cry. Bonz is happy in heaven.’ It was as if he was giving us a message from his big brother that Bonz was OK and he wanted us to be, too.

“The next morning I woke early enough to see the morning star shining brightly on the horizon. I called the kids to join me at the window to admire its beautiful light streaming from the heavens. As we stood there, Anthony said very clearly, ‘That’s Bonz’s wishing star.’ And it still is to this day!

“There you go! When we’re struggling and looking for hope, God sends the strength we need to make it through. I think in that way Anthony has been the main angel Alonso predicted. He keeps our family focused on what’s really important, making us stop to appreciate things we might normally overlook in the beautiful world around us. He also helps bring out aspects of ourselves we didn’t even know existed – especially how much love we have to offer and how to dig deep enough to give it all we’ve got!

“Life is not easy for Anthony as he deals with his autism, but he doesn’t let it stop him! He loves life purely and simply. Waking each morning filled with joy, he takes on each day with a spirit that does not fail! He brings out the best in us all.

“As a parent, I have this hope that my children will grow to be the best they can be, especially as messengers of God’s word. When we received Anthony’s autism diagnosis, I asked his doctor what we could do for our son. He said simply, ‘Offer him the moon and the stars and see where he goes with it.’ Anthony, because of who he is and what he is about, has taken the stars and given back more than I could ever have imagined. We are grateful each day for the inspiration and hope Anthony’s message provides: There is so much joy and love to share even without the spoken word!”

For more information, go to www.artofautism.net