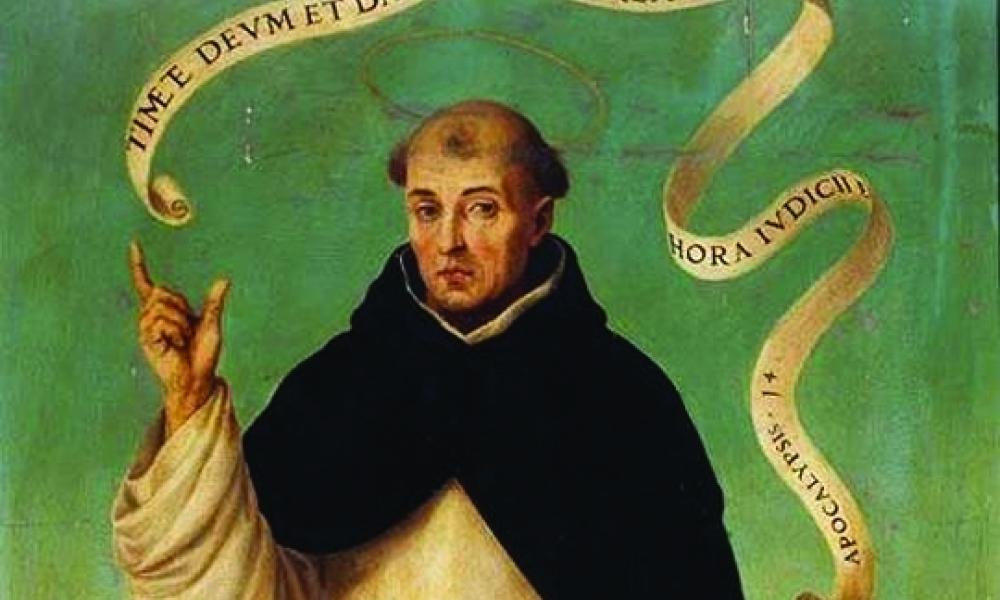 Meaning of name: from the Latin vincere, “to conquer.”

Claim to fame: Born in Valencia, Spain, in 1350, Ferrer’s parents were distinguished by their virtue and alms-deeds. They made it their rule to distribute alms whenever they could. At age 18 Vincent entered the Dominican Order during the time of the Great Schism – the church’s division under multiple popes. He received his doctorate at Catalonia, followed by five years of preaching at the Cathedral at Valencia. In 1394, Cardinal Pedro de Luna set up a papal court in Avignon and named himself Benedict XIII. He offered Vincent many church positions – even that of cardinal, which he refused. He only took the role of de Luna’s confessor. Vincent campaigned fruitlessly to end the schism and relinquished his duties to de Luna four years later to become a missionary. He spent the next 20 years preaching throughout Europe about sin, death, God’s judgments and eternity. Vincent’s sermons were so powerful that many people returned to their Catholic faith.

Why he is a saint: Vincent lay dying when he saw a vision of Christ, St. Francis of Assisi and St. Dominic. As a result of this vision, he was miraculously cured. He began preaching about the last judgment and the need for penance. Because of this, Vincent came to be known as the “angel of judgment.”  Though Vincent spoke only his native Spanish, people of all languages were able to understand what he said. His biographers believe he had the ability to speak in tongues to communicate the word of God.

Best quote: Vincent’s favorite saying was, “Whatever you do, think not of yourselves, but of God.”

How he died: Vincent Ferrer died at the age of 69 from a fever. He asked for the Passion of Christ to be read from all four Gospels at his funural, because it was the Wednesday before Palm Sunday, April 5, 1419.