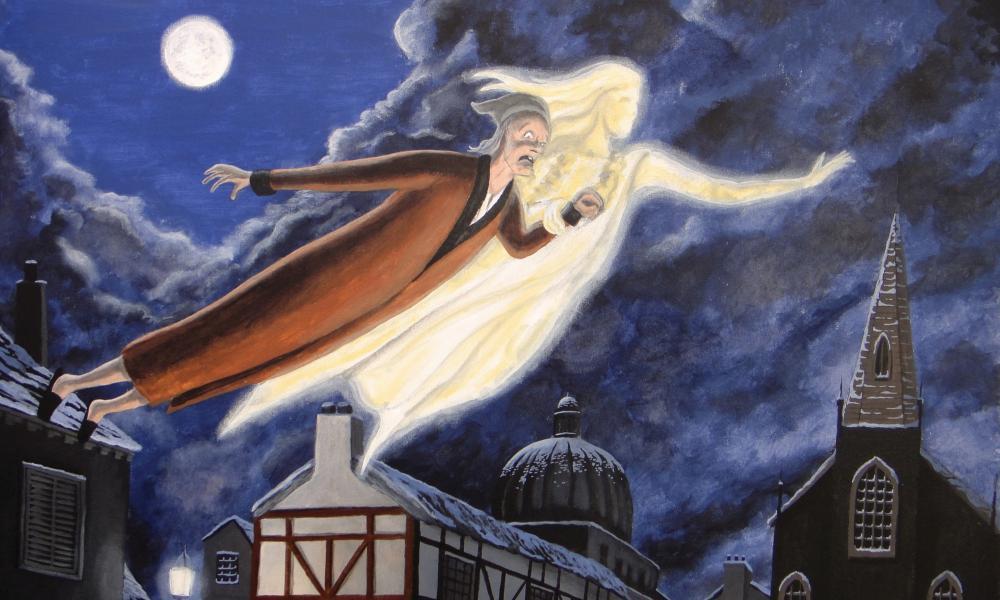 When Charles Dickens published A Christmas Carol in December of 1843, the importance of Christmas was fading in England. People had lost sight of its meaning and relevance, a cultural state of affairs that we can certainly relate to today. This one story began to change all that with its immediate popularity and its impact on redefining the importance of Christmas at that moment in England. Even now, this story continues to permeate our consciousness. For example, the book introduced the still-used, and often criticized, phrase, “Merry Christmas” to the English language. And who can forget the famous mantra of Ebenezer Scrooge: “Bah! Humbug!”

Yet times change, and while A Christmas Carol has become itself part of the Christmas tradition, the story alone cannot capture the true meaning of Christmas for Catholics – but it can shed light on that which can: the season of Advent. Like Christmas, the season of Advent (from the Latin: ad venio “to come to”) has lost its significance for many Christians. Often, it is simply viewed as the four super busy weeks prior to the celebration of Christmas during which we scramble to complete our gift shopping and to prepare for the Christmas dinner. In reality, though, Advent calls the Catholic faithful to much more …

The Ghost of Christmas Past: The task to remember

In A Christmas Carol, Ebenezer Scrooge is brought face-to-face with his past. He sees his late sister Fan, who rescued him from the loneliness and isolation of boarding school. He revisits the Christmas party thrown by his kind-hearted mentor, Fezziwig. And he relives the loss of his one true love, Belle. In each case, Scrooge is challenged by the ghost to remember that which holds true value and produces true happiness.

Scrooge, of course, resists this challenge even after getting lost briefly in the spirit of joy as each memory passes through his consciousness. Joy such as this has belonged exclusively to the past for Scrooge, a past which is dead and gone – and best left that way. Reality and the demands of making money afford no room for this kind of sentimentality, this remembering of who he was.

Scrooge simply tries to suppress the regret that begins to bubble up from the depths of his being. He does not want to remember who he was and how he has changed. However, he cannot help but notice how different he is now as he recalls how he has treated the son of his dear Fan so poorly; how he has employed practices that oppress his sole employee, Bob Cratchit, much in contrast to how Fezziwig had treated him; and how his growing obsession for money and material wealth had eclipsed his love for Belle.

The season of Advent presents us with the same challenge as this first ghost. It represents a time for preparing ourselves to celebrate the greatest gift ever presented to the world, the incarnate Word of God. It also represents an opportunity for us to look to the past and to remember who we really are, where we come from and where we fit into this greatest story ever told.

The logic for this task should be clear: If we do not know who we are, we cannot know for whom we were made. If we do not seriously undertake the task of reassembling our identity as baptized Catholics, our lives will reflect a lack of proper order that is disrupted when we fail to remember that we were created by a loving God for eternal life in communion with God. This act of remembering is crucial if Advent is to be a season of repentance and reconciliation in preparation for entering the full joy of Christmas Day.

In Advent, we are called, then, to “re-member” God’s great gift of love, the incarnate Word, Jesus Christ (the culmination of so many years of expectation). We do so in order to “re-member,” “re-establish,” “re-cognize” who we truly are once again – sons and daughters of God destined for eternal life with the Communion that is the Holy Trinity. This life with God alone is valuable; this alone is happiness.

The Ghost of Christmas Present: The task to forget

The second ghost to visit Scrooge makes it a point to show him the importance of Christmas Day by allowing him to see how people all over, even those who lived in the most wretched of circumstances, mark Christmas in the present. Scrooge witnesses the Cratchit family’s happiness despite their poverty, and the fun and fellowship at his nephew’s house. More than this, the ghost allows Scrooge to feel not only his own great loss at not celebrating, or entering into, Christmas, but even the loss of others, namely his nephew, due to Scrooge’s absence.

Perhaps at this point, the spark of awareness begins to grow into a steady flicker for Scrooge as he starts to realize the consequences of his self-centered drive for money. His self-enclosing activity had managed to isolate him in miserly misery and numb him to the joy that saturated the air on Christmas Day. His obsession with himself and his greed had completely blinded him to the existence of others.

The first task of Advent calls us to remember our identity in Christ. The second task calls us to make our souls a fit dwelling place for the “mind of Christ” to well up within us here and now, especially in our celebration of holy Communion. After all, Catholicism is an incarnate religion that is not simply content with the happenings of history. Instead, as the body of Christ in the world, the Church is to make present the word of God, a role that takes on an additional dimension when it comes to Christmas Day.

Remembering seeks to re-establish proper order to our lives – to know who we are and to whom we are going. This second task now speaks to us of the need to forget ourselves (our self-centeredness) in order to make room in the inn of our hearts for the Spirit of Christ who is present among us and through us in a special way on Christmas Day. The repentance and reconciliation that result from the first task gives way to the self-emptying of the second task in a way that enables us to say, paraphrasing the words of St. Paul in Galatians: “It is no longer I who celebrate Christmas Day, but Christ through me.”