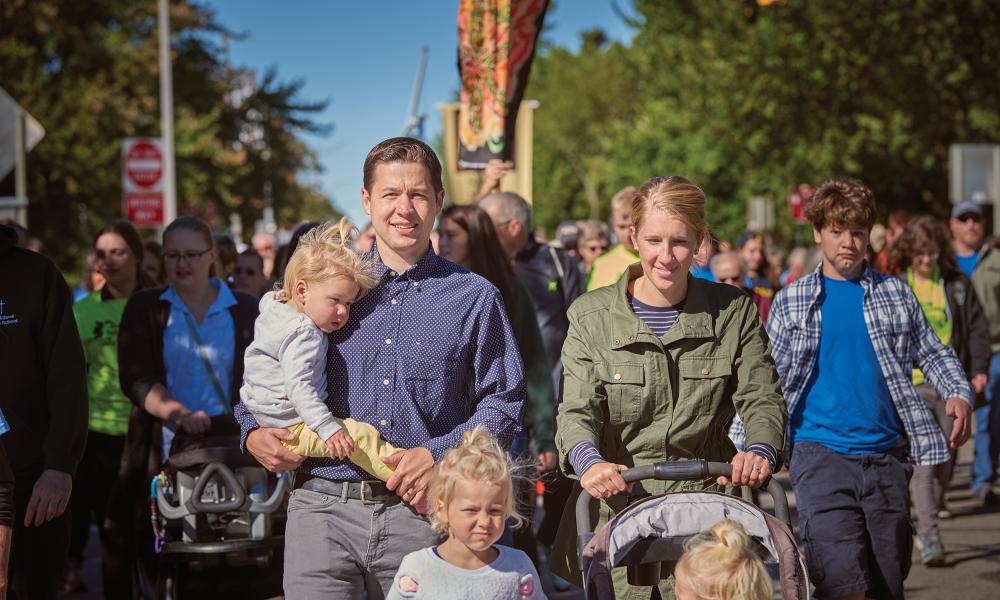 Adam at the Assembly: A Powerful Faith Experience

“To witness the sheer number of people who decided to show up and share their faith was so striking,” declares Adam Bishop as he shared his experience of joining the eucharistic procession for the first ever, diocesan-wide, Made for Happiness Assembly. “It literally took my breath away.

“Because we didn’t arrive at the Breslin Center until 10 a.m., we had to walk a few blocks to join in. As we approached, we came upon a sea of Catholics walking together. It was utterly amazing!” After he arrived, Adam soon realized “It was a real blessing to approach from the front because we got to see Jesus leading everybody. The people following behind the Eucharist, especially those way in the back, probably didn’t get the full impact of being led by Christ.”

Adam, his wife, Mary Teresa, and their three young daughters learned of the assembly from their parish, St. Pat’s in Brighton. From the start, Adam felt it would be a good opportunity to gather with the community of the Diocese of Lansing for an evangelization event. “I really wanted to be out there supporting Catholicism, and to show I love being Catholic. Ever since college, my faith has become really alive and been my home. I strive to be better, be more involved, read more, and participate in small groups,” he says. As Adam saw it, the Made for Happiness Assembly would provide another opportunity to enrich his growing faith.

Having participated in faith conferences in the past, including a World Youth Day, Adam anticipated a spiritually nourishing day while mingling with other Catholics who share the joy of Catholicism. It came as a surprise when he found himself profoundly overcome with something he had not considered: the experience of seeing such a large gathering of people from his diocese together at one time. His diocese. His people. His local Church. “To see all our parishes, all our priests and our bishop together at one time was so powerful for me. It was incredible,” he explains.

Of the procession, Adam says: “Though parishes were marked by individual banners, you could plainly see the differences that made each one its own community. I found it so interesting that each parish’s personality was visible. Some parish groups were praying the rosary, some were singing praise and worship songs, and some were just talking and having a good time being together. It was apparent everyone was happy and excited to be there together, as one whole piece of the Church.”

The joyful, holy persona of the Catholic crowd spilled over into the streets of Lansing as the entire procession would periodically halt and the monstrance holding the Eucharist would be used to bless each particular stop along the way. “When they stopped and shared a blessing, you could just feel the Holy Spirit come upon the place,” he says. Adam carried the aura imparted by this sacred act throughout the entire day.

The morning procession was followed by inspirational talks in the afternoon by Father Mike Schmitz, Jennifer Fulwiler and Deacon Larry Oney. Being a follower of Father Mike on YouTube, Adam was excited to see and hear him in person. Father Mike’s message articulated Adam’s own feelings on the differences between spiritual joy and secular happiness. “Joy is a choice, a sense of being, and you choose to let Jesus provide. Our culture defines happiness as a temporary goal that is never fully satisfied so we keep moving the goalpost. Joy, on the other hand, is about intentionally seeing the good in each moment because, by following Jesus, life is going in a right direction.”

For Adam, Jennifer Fulwiler’s talk about her conversion reinforced that Jesus is truly real. And he enjoyed Deacon Oney’s rally-style delivery and how it energized the crowd. “His talk was really powerful. He spoke of many things but I liked how he addressed the elephant in the room by bringing up the recent scandals in the Church. He basically said sin was not going to deter us or have power over us. He led us into a cleansing-type meditation where he had us ponder our own struggles and invited us to release them to Jesus with a yell. On his cue, the entire arena shouted. It was a holy shout. It did something to me. I felt a power going out of me to the Lord and raising my intentions. The intertwining of my spiritual needs with my physical self was such a release,” he says.

The day’s scheduled events concluded with a diocesan-wide Mass. “Mass was big. Seeing almost all of the seats in the Breslin Center filled, and seeing all the diocesan priests process in and gather around the altar, is not something you generally get to experience. You really don’t realize the enormity of a diocese until you are all gathered together. The music was beautiful and during his homily, Bishop Boyea reinforced our call to be intentional disciples. I really love our bishop. Whenever I hear him speak, I always feel invigorated and more confident in the structure of the Church. I feel like he’s watching over us like he should be,” he remarks.

Participants were given resources to remember the day and support their personal evangelization efforts, including a copy of Matthew Kelly’s book The Four Signs of a Dynamic Catholic. A pocket book of Scripture containing the Gospels and Acts of the Apostles was also distributed, complete with this inscription from the bishop: "May you, through prayerful reading of these sacred Scriptures, discover the eternal happiness in Christ for which you were made."

The day, according to Adam Bishop, was rich, full and rewarding. The magnitude of executing such a sizable event was not lost on him. “Everything was well planned, from the advertising to the day’s events. There were plenty of food options, Mass was well-orchestrated; bounce houses and professional child-care were available for children; and the speakers were spiritually uplifting. My only regret was not being able to do everything offered due to time constraints and long lines. I did not get to experience many exhibits, or go to adoration, reconciliation or prayer teams because of that,” he says.

Adam is emphatic in affirming he would participate if the event were offered again in the future and encourages others to do the same. “It’s a great way to refocus. It should definitely be a reoccurring event; it should be a template for every diocese around the country. I left exhausted, but a good exhausted. A happy exhausted.

“It was so great to see the community of the Church alive and well in Lansing,” he adds. “You know, you can listen to talks from various electronic sources anytime, but when you can be at one place with your local people and see them so alive with our faith, it makes you feel like ‘Yeah, I can do this because I am part of something greater.’”