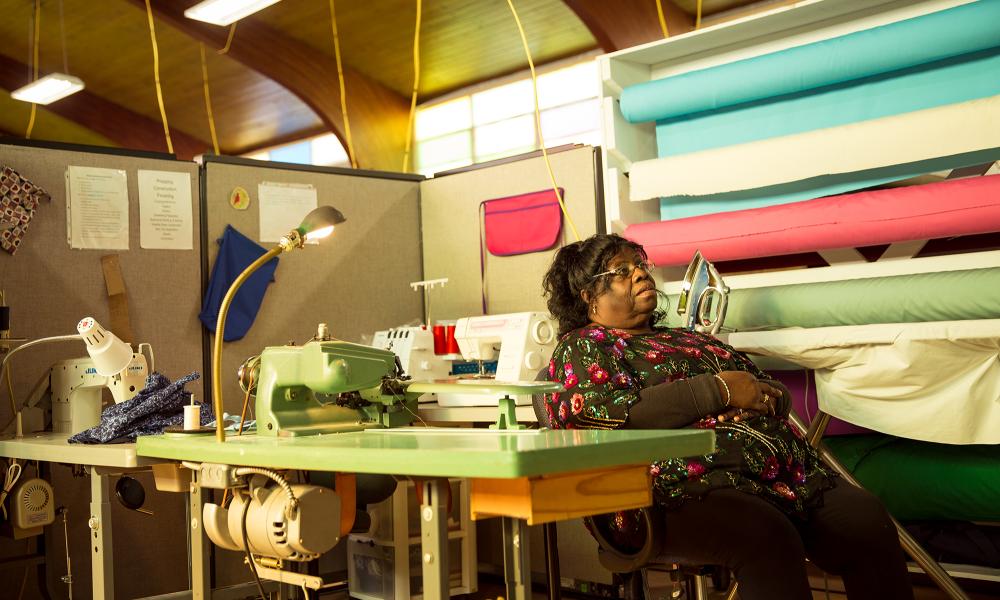 From Abuse to N.E.W. Life - How Sisters Judy and Carol helped Jessie believe in herself

"At 7 years old I left my family’s Louisiana farm to live with my grown sister in Flint. My sister Beatrice was like a sister and a mother,” Jessie Cummings explains. “She and her husband had jobs, so they had money. They would treat me real, real special – sent me to school and dressed me real nice. On the farm, we used to make skirts and vests out of flour bags, and we thought we was looking good! When Beatrice and I went back to our family at Christmas, I could see that my parents couldn’t really feed their eight kids. Beatrice gave me a stable home."

“I wish they had let me stay with my sister. I really do, but when I was 15, they decided it was time for me to come back to the farm. I learned to drive a tractor to make straight rows for planting stuff on. I would work some and go to school some. I did stop in the 11th grade ‘cause I got pregnant.”

“Going back, I want to cry, like I want to cry now. It was really hard because my dad said I had to get out because he didn’t want the responsibility of bringing another baby in. The boy that I married, it wasn’t no love marriage. We just got married because he had got me pregnant.

“It was murder in that marriage. He didn’t work or take care of the kids, and he just beat me. I had to marry him in order to survive but after I had kids people still had to give us food.

“Down in the South, men have power and the women none. I had four children by him. The fifth one, his name was Roosevelt, Jr., named after my husband, but he said the child wasn’t none of his. When the baby was 8 months old, I had to get something from my mama’s house and I left him alone with my husband. When I came back the baby was laying in bed. He was dead.

“I had nowhere else to go, til my sister Beatrice came and got us all – my children and my husband – and took us back to Flint where my husband got a job in construction. But it was cold up here, so he just left and went to New Orleans to become a loan shark. Somehow he must have done something to somebody because he ended up dead – stabbed seven times and throwed in the river in New Orleans.

“Then I met a man here and he was just as devious! He was abusive during our relationship, but I couldn’t get rid of him. I thought, well maybe if I marry him the abuse will stop. It didn’t. If I just said something he would hit me with his fist.

“My neighbors and I had to call the police because he was always beating me. Finally the police put him out, but then he stalked me. He would drive by my plant when my shift ended, and if I seen him I turned around and went back into the women’s locker room. I used to sleep on the wooden benches in there all night. When the women would come in for work the next day I’d take wipes to clean up. I wasn’t smelling right, but whatever. I was scared to go home. I made meals for my kids during the weekend so they had food in case I didn’t make it back.

“When I finally made it home, I was trapped in my house from his stalking – driving by our house and shooting at it. I still got the bullet holes in the garage.

“One day one of the boys had got in trouble. The police called to say they was taking him to the juvenile facility, and I could come pick him up there. Well I said I can’t get out the house, but they said, ‘Well, we just called to let you know that.’

“I was scared, but I got in our van and headed in the opposite way I had seen my husband drive past. But somehow he saw me and caught up. When he pulled alongside me all I saw was the shotgun he had pointing at my face. I hit the gas, but he shot anyway and blew out the back window. The bullet came through my seat. I still got it in my back. He didn’t go to jail for long, but the abuse finally stopped.

“For a while I was on medical and mental health disability from the shop, sitting around the house gaining up to 450 pounds. My two daughters was coming here to the N.E.W. Life Center and they kept saying, ‘Mama, you should go up there, it’s nice.’ Brainwashing about the center!

“So one day I came up here. I was sitting with Sister Judy and she said, ‘Miss Jessie, is there anything I can do for you? Anything that you need?’ I just broke down and started crying. I’m not used to people doing things for me, and the way she asked me I felt I could tell she meant it.

“Sister asked me do I want to work? ‘All you need to do is sew a straight line.’ So I said yes. They saw I could do good work. Before long I was making hospital scrubs and taking classes to help me get back in charge of my life. Now I’m down to around 270 pounds. I have my G.E.D. and I even had speech lessons ‘cause peoples had a hard time understanding my southern accent before. I’m a mother in my church, New Jerusalem Full Gospel Church. Most of the young ladies come to me.

“These sisters have played a beautiful, beautiful role in my life. They have seen me grow, and I have seen myself grow in their presence. They let you know you are somebody. I could see something in them. They free hearted, and they’re always here for me.

“Sister Carol says, ‘We don’t judge.’ In life we don’t know at that time why we be going through stuff. Once you start serving the Lord he’ll reveal stuff to you. Then you can look back over your life and see where he brought you from.

“I am a chosen person of God, and I been a blessing all along. Now I can just see it.”

The St. Luke N.E.W. Life Center in Flint is a faith-based environment providing life skills and workplace training, which empowers women to become self-sufficient. The center trains impoverished Flint women to become seamstresses and earn a wage to improve their family’s financial stability. To learn more about the N.E.W. Life Center, visit: www.stlukenewlifectr.com.

Catholic Charities agencies in the Diocese of Lansing: