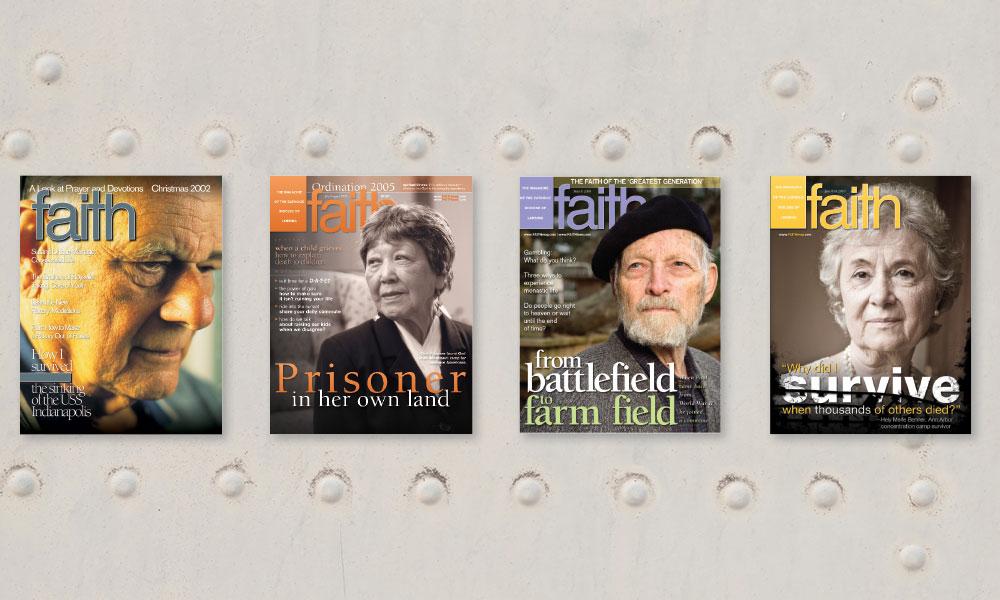 FAITH stories of bravery and witness

In this month of November in which we honor our nation’s veterans, FAITH acknowledges the 75th anniversary of the end of World War II by recalling past feature stories of the witness and bravery of several survivors of this war.

Dick Thelen served on the crew of the USS Indianapolis, which delivered the atomic bomb to the island of Tinian in the Pacific Theater on July 26, 1945. The ship sunk when struck by Japanese torpedoes and Dick spent four days floating in a life jacket at sea awaiting rescue. While waiting for rescue, he promised God that he would never stop helping people if he survived. After years of silence about his experience, Dick joined other survivors of the tragedy to clear the ship’s captain of his court-martial conviction for the loss of lives and the ship.

Cora Fujiwara was one of 120,000 Japanese-Americans interned in U.S. military encampments during World War II. She endured the hardship of living in the primitive and hast-ily constructed camps for more than a year. Cora met her future husband, Eddie, in the camp, and became Catholic because of his bold witness to his faith. Allowed to leave so Eddie could attend college, they eventually settled in Adrian, where Cora contributed to St. Joseph Parish in multiple ministries.

Paul Melton: After volunteering for the Army Air Corps in 1944 and serving as a gunner on a bomber, Paul became a card-carrying pacifist. He credits the relationships he built with Japanese prison-ers he guarded during the war with his evolution from a gung-ho teenager from Detroit to a pacifist with the Catholic Worker movement in his hometown.

Dominic Militello: Dominic tells that prayer – his mom’s and his own – sustained him through kamikaze attacks and storms with winds of 140 miles while serving on a destroyer in the Pacific. As a civilian, he worked at the AC Spark Plug factory for 30 years following the war.

Thaddeus Modrak was a torpedo-man on a destroyer in the North Atlantic during World War II. After the war, he settled in Flint to work in the auto factory and joined in the fight for fair wages and just treatment as a member of the United Auto Workers. He still has the scapular given to him when he entered the service and credits his faith for his courage under fire.

Hely Merle Benner was just 8 years old when her father was forced to leave his family and their village of Nakova in Yugoslavia to serve in the German army in 1942. Hely never saw him again. She was 9 when Soviet soldiers invaded the village and packed her, her mother and baby brother into cattle cars bound for a concentration camp in Rudolfsgnad. Young Hely promised her mother she would care for her baby brother when her mother died of malnutrition, but the baby also succumbed to the lack of nourishment. Hely was moved to an orphanage and left with-out family until reunited with cousins in 1948. Her grandmother had escaped to the U.S. and, with help from family members in the U.S. and the Red Cross, Hely was reunited with her grandmother in 1953 and emigrated to the U.S. in 1955. She considers her mother her guardian angel and credits her example of strength and responsibility in hardship with giving her a sense of purpose.