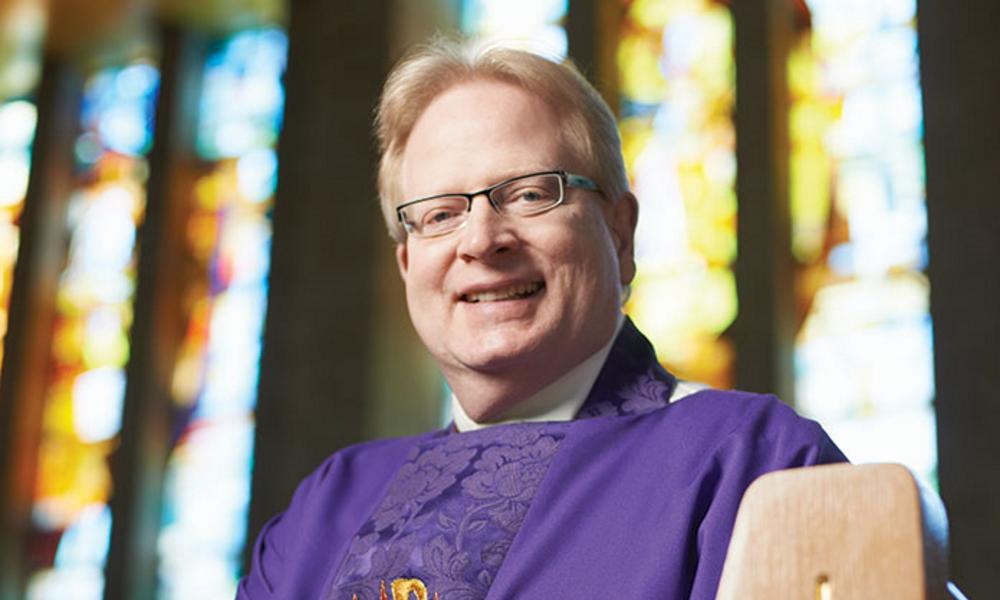 Father Steve Anderson, of Holy Redeemer Church in Burton, is known for saying, “We’re all in.”

So, when it came time to conduct the diocesan-wide Witness to Hope campaign at the parish, it came as no surprise that the parish had a 45 percent participation rate, according to Bruce Simms, parishioner at Holy Redeemer and member of the campaign cabinet.

“I trust Father and his team that he has put together to do what’s best for the parish. I go with the flow. We’re doing our best to be all in and support him,” Bruce says.

“To be honest, we pretty much listened to what our campaign director recommended. Donna Marino (of Greater Mission) did a wonderful job. She knows fund developing more than we do, and so she was a wonderful resource and was also well informed,” Father Steve says.

During the campaign, Father Steve held meetings with potential lead donors, such as Bruce, and asked them to assist with the campaign. A campaign cabinet was formed to provide support for Witness to Hope discussions with parishioners.

“Money is a tough thing to talk about, and so that’s what I felt was part of my job – to help talk about money and put people at ease,” Bruce says.

While the church held informational meetings, Father Steve says the town halls were not as successful, due to poor attendance, as presenting Witness to Hope at Mass.

“We wanted to support the bishop in his goals, and we knew a big portion of it came back here, and so we ran the bishop’s video, we made our own announcements, and we encouraged everybody to participate. We were really blessed,” Father Steve says. “About half of our families made a pledge. We thought that was a really good response. It seems to me a typical good response is about one third.”

Father Steve attributed the response rate to the “good will” and “faithfulness” of the people.

One of Bruce’s roles was presenting during Mass the importance of the campaign and why he and his wife were pledging.

“I felt Father Steve was the foundation, and so I wanted to support Father Steve. It’s like Father said once, he reports to a boss, and the boss asked him to do this. We report to Father, and Father asked us to do it, so we did it,” Bruce says.

Thirty-five percent of the total amount pledged will return to Holy Redeemer for both “fun” and necessary projects, Father Steve says, including refurbishing aging pews, completing a beautification project for the adoration chapel, enhancing the office space to incorporate a gathering area, repairing paint and wallpaper at the family life center, and replacing the family life center roof.

“The money we raised for the parish was so timely and really helped us out as a parish,” Father Steve says. “The important thing was all of us participate at any capacity – maybe a lot or a little. We really appreciated our lead gifts, but we really appreciated people who were able to give a little as well.”

“We did our best to try to make it a reasonable goal for them to where they realize they could participate,” Father Steve says.

One parishioner planned to contribute $3,000, but when they realized the contribution was over five years, they then pledged $5,000. What seemed like a large pledge became achievable over the years, according to Father Steve.

“We encouraged people to give no matter how much – just to be a part of the campaign and feel like they contributed their part,” Father Steve says.

For those parishes entering their campaign season, Bruce suggests the cabinet members recite the Witness to Hope prayer and trust in the pastor.

“It’s an easy thing to do. It’s all built on trust and once you start trusting someone, it’s easy to get on board,” Bruce says.

Holy Redeemer’s campaign was a process and a journey. At first, Father Steve says they did not believe they would achieve their goals, but as they watched other parishes succeed, Holy Redeemer “became believers along the way.” In the end, he says it came down to believing in the good work of the larger Church and the local church.

“It was a successful campaign through the efforts of many people,” Father Steve says. “I think [the campaign] is truly good both for our diocese and our parishes. It’s bringing resources into our diocese and parishes that are needed for the most basic and important things.” – Cari Ann DeLamielleure-Scott