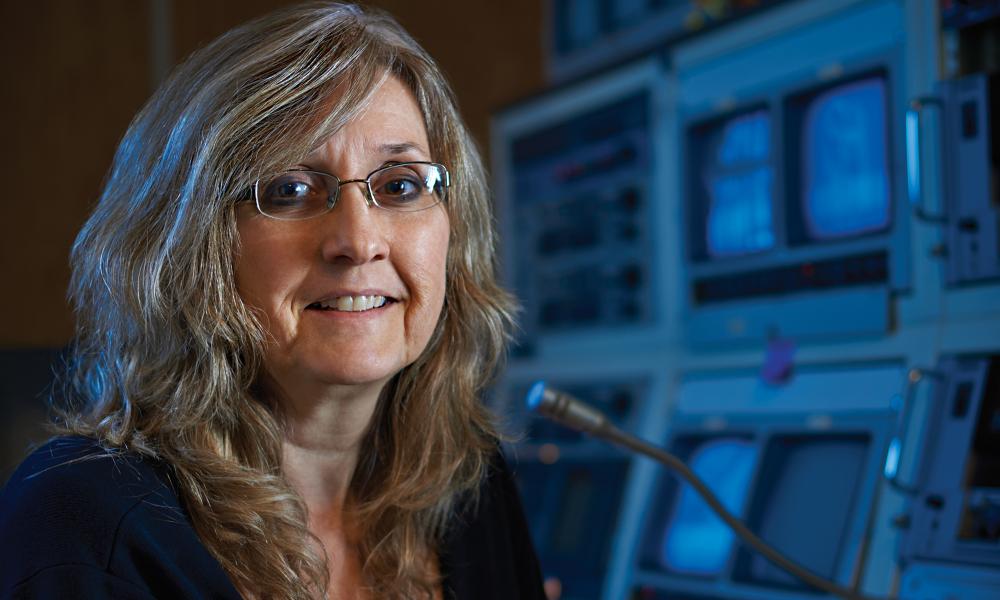 For 30 years Lisa has been bringing the Mass home

Lisa Whiting Dobson recalls the first time she heard that the Diocese of Lansing would produce a weekly television outreach Mass. “I was sitting in the office with a group of other graduate teaching assistants,” the MSU telecommunication instructor recalls. “Dr. Thomas Muth, my thesis advisor, came in and said he needed someone to help him put a Mass on TV.”

The response was not enthusiastic. “Everyone else in the room scattered like cock roaches,” she laughs. “But Dr. Muth was such an important figure in my life, and I just thought, ‘I can do this for him.’”

So Lisa volunteered to oversee the inaugural production, a taping of the Mass at St. Thomas Aquinas in East Lansing on Christmas Eve, 1984. “I came in and helped him put it on the air,” Lisa says. “And I’ve never left.”

That was 30 years ago, and Lisa has not missed the taping of a televised Mass ever since.

The diocesan Outreach Mass was the brainchild of the late Bishop James Sullivan, along with the late Dr. Muth, a professor in the Department of Telecommunication, Information Studies and Media in the College of Communication Arts & Sciences at MSU, and a former parishioner at St. Thomas Aquinas.

“Dr. Muth was such a wonderful man and a really important person in my life,” Lisa says. “He wasn’t just my advisor but he also was a father figure to me.” With his invitation to help with the TV production, the professor also became a catalyst for a budding faith that Lisa didn’t know existed in her heart.

A Lansing native, Lisa’s home life was defined by her parent’s divorce when she was very young, along with a childhood marked by neglect and abuse. “I’m probably the most unlikely person to be in the position I am today,” Lisa says. “I was around churches as a child and I believed that God was always present in my life, but my father wouldn’t allow me to be baptized.” Not only was Lisa a non-Catholic when she began producing the outreach Mass, she was not a member of any denomination.

But her role in the outreach Mass opened Lisa’s eyes to the practice of the faith, beyond just the vague sense of spirituality she had felt up to that point. In addition to being exposed to the Gospel and growing to understand the meaning of the Eucharist, Lisa grew to know and appreciate Catholicism through the pastors with whom she worked from week to week.

“Because I didn’t have strong family figures, the priests also became like father figures to me,” Lisa says. The pastors didn’t necessarily know anything about Lisa or her background, but each one took an interest in her and nurtured her gradual awareness of faith without ever pressuring her to convert.

“Father Mac [Msgr. Jerome MacEachin] was well into his 80s when I started producing the outreach Mass, and he was so good to me. He knew a lot of poetry and he liked to sing. He was like a grandfather,” Lisa says, recalling the pastors who served at St. Thomas through the years.

“Bishop Sullivan was very warm and kind. Msgr. Michael Murphy was so strong and just and ethical – and he has a great laugh.” She also forged friendships with the late Msgr. David Stotenbur, and with Father David Speicher and the current pastor, Father Mark Inglot.

In 1989, after five years of outreach Masses, Lisa realized the words she had heard week after week had begun to sink in. She converted to Catholicism. Now, she not only plays the role of television producer and director, but is also a full participant and member of the Church.

“There are moments in your life when you turn around and realize something is meant to be for you; it’s part of your calling. In my case, I have this gift. I’m a live TV director and there aren’t very many in town who can do what I do,” Lisa explains.

“I’ve always felt that this was a gift I was given because I’m supposed to use it in this way. And whatever else I do, I certainly carry my values with me, for example my teaching, but that’s what that gift was for.”

Along with her husband, Tom Dobson, and their four children and four grandchildren, Lisa’s teaching is a central focus of her life. A full-time instructor of video and producing and multi-camera directing at MSU, Lisa also teaches media ethics and media employment at Lansing Community College. She also is a professional choreographer and maintains a longstanding relationship with the Happendance company of dancers.

But it’s the outreach Mass that anchors Lisa in her faith and vocation. “I feel compelled to continue doing this as long as I can and also train up a generation of people who will be able to carry it on,” Lisa says. “I know how important it is to viewers because they write to us to tell us how the outreach Mass connects them to a community.”

Reflecting on 30 years of taping the outreach Mass, Lisa muses, “Catholicism crept up on me. No one ever said, “You should be Catholic.’ No one invited me to join. I was in the environment and the next thing I knew, I realized I’m Catholic.”

Even though none of her priest-friends talked to Lisa about converting, she knew they supported her. “After I converted, Bishop Sullivan, who by then was in Fargo, N.D., wrote to me and said he’d been praying for me all that time. He said anyone who loved the Mass the way I did was likely to join the Church.”

“But it is hard to be in the environment and not let it sink in,” Lisa says. “You’d have to be so hardened and so closed not to let it affect you.” Through the years, Lisa says several Michigan State students who have worked on the six-person production crews also have converted to Catholicism. “I don’t proselytize in any way. They simply realize, after spending so much time at Mass, how meaningful it is. Just being exposed to it is very convincing.”

Lisa and the production crews see the Mass differently than parishioners in the pew. “My favorite shot in the Mass is of the priest holding the Eucharist up. We have to shoot from over his shoulder and the Eucharist fills the screen and it’s just so powerful.”

“And the words,” Lisa adds. “When we say, ‘Only say the word and I shall be healed’ I realize that the healing power of God is without bounds.”

“I love the rhythm and the movement of the Mass,” the director and dancer says. “The Mass is highly choreographed. It’s universal and artful. Each week, I feel like I’m participating in a timeless piece of art.”