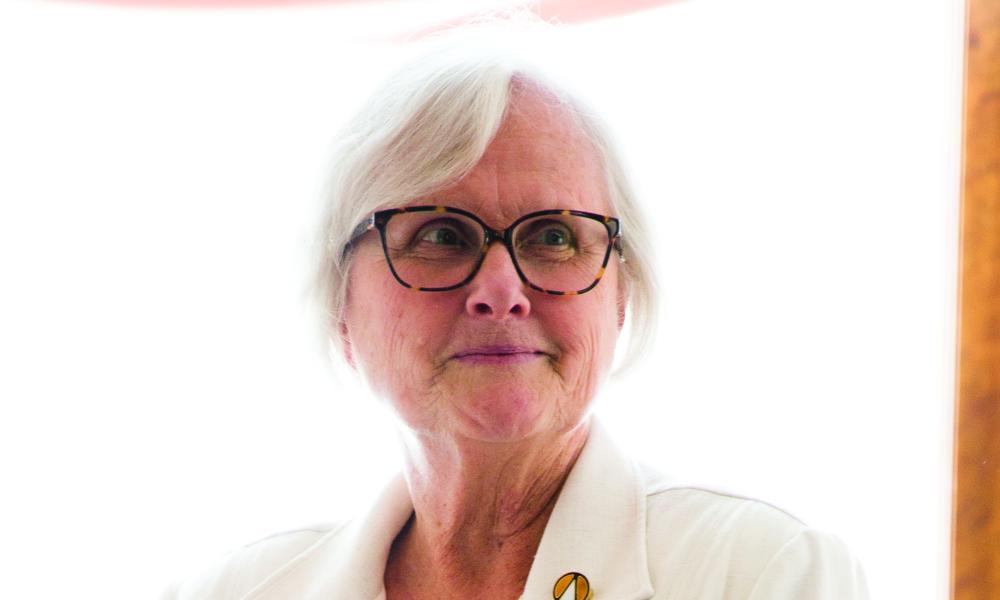 Thirty minutes. What would you gather if given 30 minutes to leave your home and city of residence? The Dominican Sisters of St. Catherine of Mosul, Iraq were given three alternatives by the Islamist terrorist group ISIS: convert to Islam, leave immediately or be killed.

Shortly after hearing this ultimatum last August, the sisters began the 10-hour journey by foot to Kurdistan because ISIS was coming. And because the extremist group has quarantined the area by placing landmines around the entire vicinity, the sisters do not think they will be able to safely return to their motherhouse for 20 to 30 years.

This was not the first time they have had to flee. Sister Durstyne (Dusty) Farnan, OP, the former vocations director for the Adrian Dominicans in the Diocese of Lansing, went to visit these sisters earlier this year on a trip of solidarity and explains that, in 2008, the sisters moved north from Mosul to Qaraqosh to begin the process of building a new motherhouse for their congregation of 130 women.

And then in June of 2014, Sister Dusty says, “They were asked to leave because Qaraqosh was no longer safe. For three days, they stayed away and things settled down, so they returned. But the ultimatum came down on Aug. 6, and these sisters and all Christians of Qaraqosh began their long journey. And it wasn’t just Christians being forced out, but anyone who wasn’t Islamic or Islamic enough. When the sisters left, they left everything, including home furnishings, teaching materials, liturgical materials, as well as historical treasures of the area and their order.”

Upon their arrival in Kurdistan, language was the first barrier the exiled Dominicans encountered. The sisters spoke Aramaic, and were now in a land where people spoke only Kurdish. Housing was the next great need. The sisters had purchased an orphanage several years ago that was able to house a few of them, and 15 mobile housing units were purchased and placed around the grounds, enabling 37 sisters to live on this compound. The other sisters found housing in three convents in the city of Dehouk.

Sister Dusty was accompanied by two other Dominican delegates, one from Illinois and one from New York, on her trip to Kurdistan this past January. She explains, “Our purpose in going was to see the situation of the displaced Christians, be with our sisters in solidarity, witness how the sisters are responding to the needs of the displaced and to remind them they are not alone.

“When we first arrived, my immediate reaction was joy to see the Dominican Sisters of St. Catherine of Mosul. I had known several of them because they studied and lived with us in Adrian, but finally got to meet so many others. My next reaction was terrible sadness as they took us around to see what was happening and how people had to live.”

The three American Dominicans visited the shelters their Mosul counterparts serve. Each week, the Iraqi sisters travel to the various camps in Erbil to dispense vouchers that provide for food, medicine and clothing for the displaced Christians. The Church has purchased mobile housing units, and provides rent for displaced people to live in unused retail space. The sisters contribute by providing direct assistance or by contacting others to provide help.

And sometimes help comes in the simplest form, such as a plastic chair. The Mosul sisters have purchased and distributed hundreds of plastic chairs so the displaced people have somewhere to sit in their temporary homes or at Mass. In a bizarre twist of fate, Sister Dusty shares, “Every Friday, there is a Robbers Market where the pilfered items from the homes they all left are sold. The people watch as their possessions are marketed for very high prices.”

Some American congregations of Dominicans have supported their Iraqi sisters by providing them with room, board and tuition to be educated in the United States. The Mosul sisters have earned degrees as physician assistants, nurses, teachers and Scripture scholars, although their current situation is redirecting where and how their skills are best utilized.

Born and raised in St. Joseph, Mich., Durstyne Farnan never dreamt of sisterhood or working on global issues, although she always felt she would have 12 children with culturally diverse names. It wasn’t until she had completed one year of college that entering the convent even entered her thoughts. “A classmate of mine decided to enter the Adrian Dominican Order and invited me to her reception ceremony. It was very moving and I was deeply touched. The more I thought about it, the more the thought stayed with me. I went to talk to the sisters and to my parish priest; at 19, I entered. In 2016, it will be 50 years since I joined the Adrian Dominicans.”

Each Dominican congregation has its own mission statement. The Adrian Dominicans’ mission is to share faith and life with one another, and to be co-creators of God’s justice and peace. There are 151 Dominican congregations in 110 countries, 22 of them in the United States. The Dominican Sisters of St. Catherine of Mosul, Iraq were established in 1879.

Sister Dusty shares, “In the 1970s, we began to be awakened and study issues in the world. This is when the sisters began moving from strictly teaching to different fields like medicine and the law. When you belong to a global order, you find that your heart is about what is happening to the rest of the world.

“Since becoming an Adrian Dominican, I have taught school, been a missionary in Africa, become a social worker and worked in mental health, served as the justice promoter for the congregation and, this year, will complete my seventh year as the vocation director. As a result of my various careers in this congregation, I have seen a great deal of the world; I felt so privileged to represent all the Dominicans when I traveled.”

Sister Dusty’s vocational call is truly her passion. She shares, “I wish I had more years in my life than I will because I know I will not have enough time to accomplish all I want. We are each called by God and then called again and called again within that call. A priest friend of mine always says he was ordained to be a servant of the people. Those are words that motivate me and keep me going every day. I promised to be a servant of the people and be there with them.”