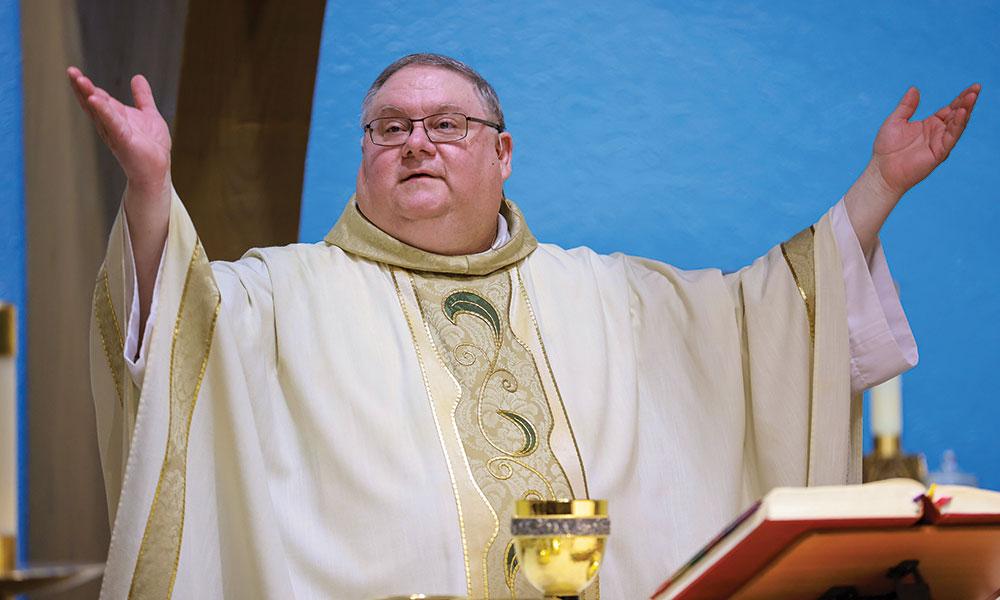 25 Years as a Priest

On June 14, 2022, Father Dwight Ezop celebrated 25 years of priesthood. In addition to his service as a pastor, Father Dwight has been the editor-in-chief of FAITH magazine since 2001 and the chairman of the board of FAITH Catholic since 2007.

Where did you grow up?

I grew up in Saginaw and then went to the University of Michigan in Ann Arbor. I planned to have a career as a teacher, but God had other plans. That turned out to be one of the blessings of going to Ann Arbor; my life might have turned out much differently if I hadn’t been there at that time.

When I was a student, I stepped away from actively practicing my faith for a few years. But then,  when I woke up on a September Sunday in 1987, I thought, “I am missing something. What could that be?” I realized it was going to church, so I headed out the door and went to Mass. It’s emblematic of how the Holy Spirit works in my life – he hits me upside the head with a 2x4. I went to various parishes through the weeks, looking for my parish “home.” None of them felt exactly like the place the Holy Spirit was calling me to be. And then I went to St. Francis; it was the fall parish ministry fair and greeters at the door were asking if we wanted to participate. The greeter who approached me was from the choir – I’d always loved singing in church, so when he asked, I said, “Sure, why not?” That open door opened a series of doors – choir, then bell choir, then sponsoring someone in RCIA – which gave me a chance to relearn my faith. Meeting Father Charlie Irvin at RCIA was a huge influence. I thought he was the coolest priest I’d ever met. He shared some of his story, and his ability to speak about faith in an everyday way drew me in.

When did you realize you had a vocation?

That came through a variety of people in a variety of ways. My high school youth ministers, Moe and Ann Clevering, first mentioned that a life of service in the Church could be a rewarding adventure. Also, the Franciscan priests at St. Thomas in Saginaw – Fathers David, Willie, Pat and Ed – all modeled priestly vocations. There was a whole cast of priests who I saw as gentle, kind, engaging, funny, shy, sometimes unsure and transparent. Father Ed taught me something important: That on some level, people have the idea that a priest is a “finished product.” Father Ed showed me that it was OK to continue engaging in the question of how best to serve God, even after being ordained.

I first approached Father Charlie in 1988 to enter into a discussion of vocation, and in 1991, I finally got to a point that I could approach the diocesan director of vocations. That gave me time to experience parish ministry – I was involved in so many aspects of parish life.

In 1992, I entered seminary at Mundelein in the Archdiocese of Chicago. That was the year young Father Robert Barron (now Bishop Barron) rejoined the faculty at Mundelein fresh from his doctoral studies in Paris. It was a golden time to be in seminary. We were blessed with young faculty and wonderful, seasoned, holy, veteran teachers. Right in the middle of them was Sister Dorothy Folliard, OP, who was well into her 80s, and who taught Old Testament, New Testament, Greek and Latin. But mainly she taught holiness by the example of her life.

I did a parish internship at St. Joe’s in St. Johns – what a wonderful parish, and Father (now Msgr.) Lunsford was a tremendous supervisor and pastor for me.

I was ordained on June 14, 1997, along with Fathers George Daisy, Karl Pung and Jeff Rabideau for service to the diocese, and sent to St. Thomas in Ann Arbor, which was a rewarding first assignment. At the end of 1999, I was assigned to St. Jude in DeWitt as the pastor, because its pastor had been diagnosed with terminal cancer. The people of that parish were my new millennium gift, as well as starting to work at FAITH magazine. St. Jude taught me how to be a pastor in a parish that was growing by leaps and bounds, from 800 to 1,300 families while I was there. I was assigned to St. John in Fenton in June 2013, and that was my first parish with a school. The skills I learned at St. Jude helped me grow with this larger parish.

Now I am at St. Mary Charlotte/St. Ann Bellevue – a parish that also has a school. This parish has given me a much deeper appreciation for Catholic schools. The school serves as a witness of faith in a largely non-Catholic community. The people here have shown me what a dedicated group of principals, teachers and parents can accomplish.

What has been your biggest joy as a priest?

The Eucharist. And the people. These two joys are interlinked in such amazing ways. The people think that we are the holy ones, but they’re the holy ones who inspire us priests. Their stories are entwined with the story of Jesus, and with the giving and receiving at the Last Supper. There is such joy in the community fully coming together in Communion. There is the  joy of worshiping together as the body of Christ. I have met some of the most amazing people that I would never have met otherwise. When I think of the cast of characters I’ve met through the 25 years, I have been so blessed by them that it blows my mind. What did I do to meet and know those people in my life other than saying “yes” to being a priest?

The biggest surprise to me was the blessing of the sacrament of reconciliation – when people need forgiveness, it’s there. I’ve seen them walk in hurt and walk out healed. It has nothing to do with me, but everything to do with God’s power in that sacrament.

What has been your biggest challenge as a priest?

There aren’t enough hours in the day. Also, the people who see their faith as something that is about just going through the motions is a challenge – being a person of faith and a priest is fun! Being a priest gives me joy, and I want to share that.

What has been your experience as editor-in-chief of FAITH magazine?

That’s a real privilege – I’m the only priest who has the opportunity to do what I do with FAITH. I have to remember not to take that for granted. FAITH has been a powerful tool to help evangelize and share the Gospel – and now FAITH Catholic has been blessed to grow to more than 64 publications!

How has being a priest for 25 years changed your faith?

It’s stronger in many ways, more resilient. I’ve seen people in horrible situations who let their faith carry them through those times with strength. They inspire me. Murder, deaths, stillbirths, addictions, broken relationships, people who were convinced they should marry someone evil. Participating in the moments that change people’s lives. That they do not collapse or reject God is inspiring.

In conclusion, I would echo what I said as the designated speaker at ordination – “Thanks!”