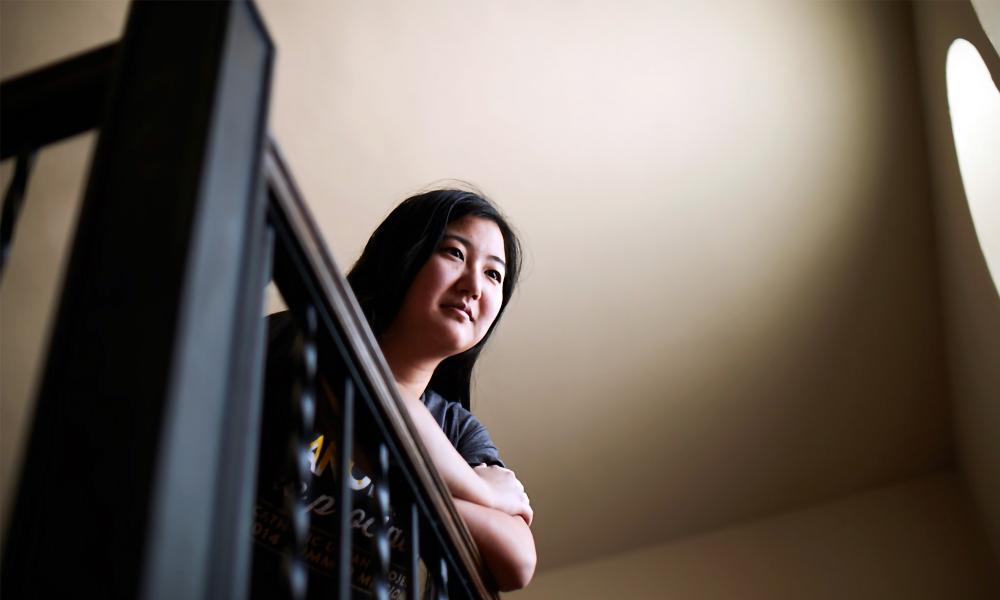 Iris is a missionary in her own back yard

Iris Chen, a student at the University of Michigan, wanted her summers to make an impact. She was told summer break should enhance her future career, and she decided she also wanted to enhance the community.

“I heard about Catholic Urban Project [CUP] through a friend of mine,” says Iris. “Our home-front needs evangelization and needs mission work. Ypsilanti is my back yard, so I thought, ‘Why not start here?’”

A cradle Catholic from Ann Arbor, Iris was able to strengthen her faith through a more active prayer life, living in community and by making connections through evangelization, community service and home renovation.

“The experience has given me an opportunity to serve the poor better and through a Catholic lens,” Iris says. “Anybody can come in and fix a house. With Catholic Urban Project, it’s about first knowing the person.”

The first year, Iris worked as a CUP missionary with nine other missionaries, ages 19 to 27, including a young man from London and a young woman from Ireland. The second year was a mission group of four, three young women and one young man, all the same age.

Although the format of the program differed in Iris’s first and second years, what didn’t change was the commitment of the missionaries and service through interaction.

Home renovation is part of the CUP mission, and last summer the mission focused on improving two Ypsilanti homes during week-long work sessions. Iris believes the extended time working in the houses made it easier to connect Christ to the residents. The renovation work benefitted not only the people served, but also the missionaries providing the service.

“The Church is found in its social teachings,” Iris says. “The Catholic Church does care about people.”

“I was thinking of Jesus asking us to minister to the poor. Where the least are is where we will find him,” says Iris. “Through service I am encountering the Lord. We see Jesus in the people we serve. The people give us a gift. They give us the opportunity to see Christ. I get so much more out of service than I am giving.”

Living in community during the summer renovation projects provided another way for Iris to strengthen her faith. The group dynamic added accountability to her prayer life, and having access to the sacraments on a daily basis made it easier for Iris to spend time with Christ.

At the same time, she had the opportunity to share her faith and her gifts with her fellow missionaries.

“We all brought something because we all have our gifts. I brought a leadership role because I had done this already,” says Iris. “Each one of us worked off our strengths and worked together as a team. I really love to study and I love the Church’s teachings. I brought some of the ‘why we are doing this’ to the group.”

Prayer was a vital part of the mission. The young people went out every week to the neighborhoods of Ypsilanti to find prayers from the people to bring to God.

“It was challenging and enriching,” Iris says. “The poorer the neighborhood, the more open the people who lived there were to talk about their faith. We made it clear we’re not trying to sell anything. We just believe in the power of prayer. We can focus on our differences or we can focus on how prayer can unify us. I think that really resonated with people.”

The missionaries carried the prayers of the people back to St. John the Baptist parish for a prayer service once a week. A gathering of parishioners and CUP missionaries brought the prayers to God.

“There is something powerful about praying for people by name,” says Iris. “I would remember whole conversations. It’s putting faces to names, and thinking, ‘This is a real person that I talked to. I’m bringing the person I met to the Lord.’”

Iris gave up the opportunity for a college internship or further academic studies to become an urban missionary with CUP. She believes nothing was lost, she was able to help some Ypsilanti residents, and she gained a closer relationship with Christ.

“Summers for college students are very precious time. People ask, ‘Why would you do this volunteer service project?’” Iris says. “I don’t have a lot of material things to give. I have time and energy. That’s what I can give to the Lord. He asks us to give what we have and this is what I have to give. I think all of us missionaries knew that going in. We don’t have money and resources. We have the summer and ourselves. The experience has given me an opportunity to serve the poor better and through a Catholic lens. That’s something I’ve gained and will take with me wherever I go.”

The Catholic Urban Project is a summer service program that invites young adults to spend 8 weeks in direct service to the urban poor. Young adult missionaries live together in community and are given the opportunity to deepen their lives of faith through an intentional prayer life and living the Gospel call to service. For more information, visit www.catholicurbanproject.org/.