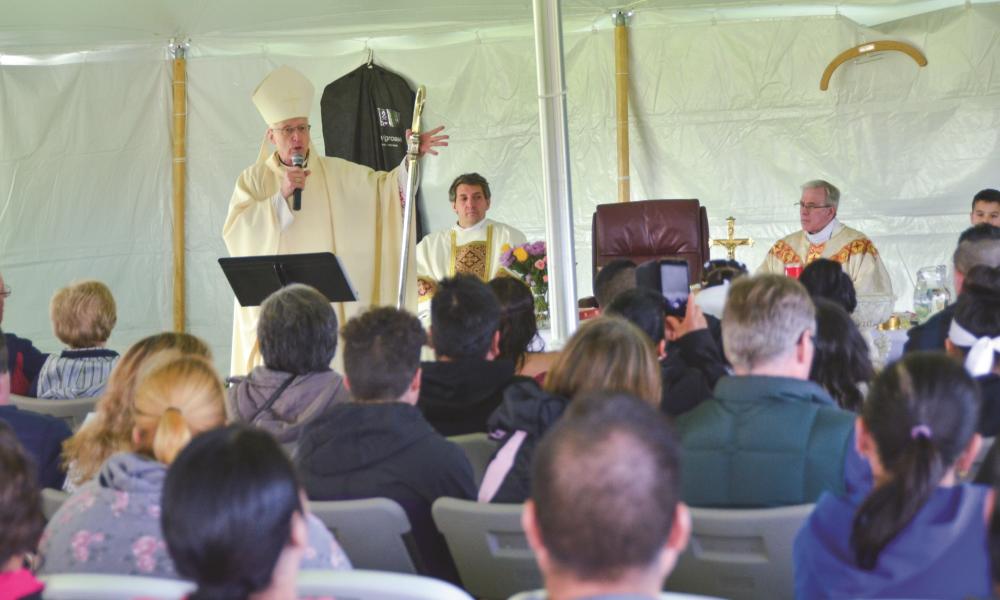 On Sunday, April 28, Bishop Earl Boyea, with Father Tim Nelson and Deacon Carl Boehlert, celebrated a Mass for the Hispanic Community at Berlyn Acres, a dairy farm in Fowler. This Sunday marked the beginning of the season for the Hispanic soccer league. Participants came from all over the diocese and from neighbor dioceses.

Father Tim Nelson explains how he found this community of Hispanics: “A couple of years ago, I had heard that many Hispanics met to play soccer somewhere in Clinton County, so I decided to go and see, and I found there were hundreds of them playing. Knowing that most Hispanics are Catholic, I decided we could celebrate Mass on Sunday there where they played soccer.”

For every Hispanic Catholic, is it great honor to be able to attend a Mass with the bishop of the diocese. Bishop Boyea has an ongoing commitment to serving the immigrant community, and his immediate “yes” as an answer when he was invited to celebrate this Mass is proof of this.

One farmworker, Tim Berry, made sure to designate a good place at the farm to celebrate the Mass and to have everything ready to welcome the attendees. When people arrived to set up for the event, he said: “I just hope the cows will not get out during the middle of the Mass.” When asked, “Is it common that the cows escape?” he said: “Oh yes, every day”, afortunadamente  ese día se portaron bien.”

The enthusiasm of many people made this celebration possible:

• Michelle Parker and Father Michael Williams from St. Johns helped to bring all that was necessary to celebrate Mass on a farm

• Deacons Tom Fogle and Ken Preiss, and Jeremy Priest from the Office of Worship helped with the preparation

In the week leading up to the event, Michigan weather was not promising to have a nice day for an outdoor celebration of the Mass, but we ended up having a beautiful sunny day, which felt like God´s grace  favoring us to celebrate the Mass. In addition to the soccer players and their families, some farm owners attended, and many people were standing.

At his homily, Bishop Boyea talked about Doubting Thomas, who said he would not believe that Jesus had risen from the dead unless he would touch his wounds. The bishop spoke of the reality of the Church, the Body of Christ which also has wounds caused by our sins. He said: “Jesus wants us to put our hands into the wounds of this, his Body, his Church. He does not want us to turn away in disgust, but draw good from that Body, banish its sinfulness, and believe that even here God’s will is being done.

“This must seem like a scandal to some, but it is what Jesus did ...  He wants to continue to do his work in the flesh, through human beings, through his Church. We may want it another way, but Jesus’ words are a challenge to all of us: Blessed are those who have not seen and have believed, because of the witness of these.”