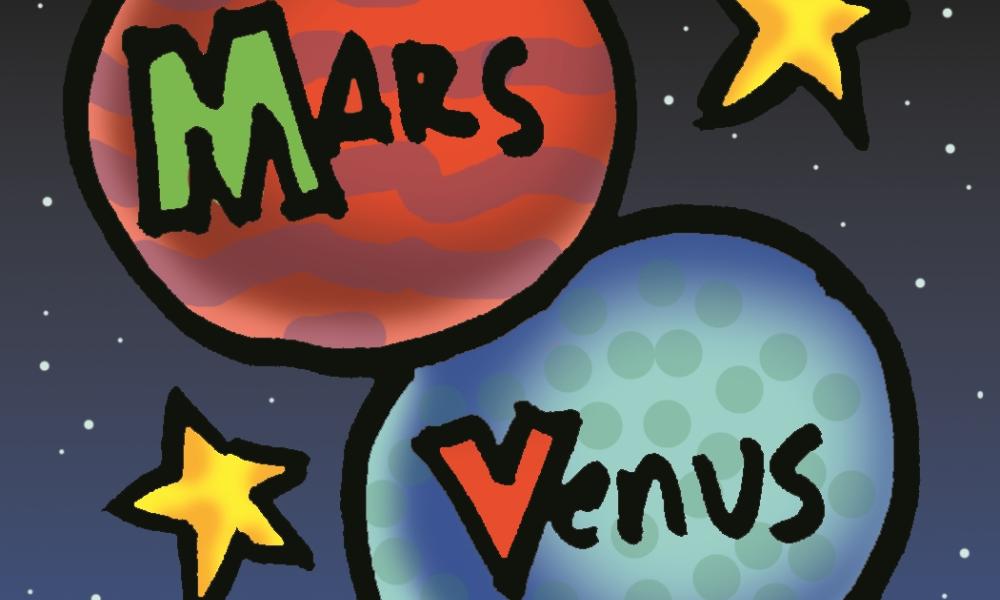 Are guys really from Mars and girls from Venus?

Are guys from Mars and girls from Venus? Are gender differences really a matter of either/or as this question suggests?  The complexity of teen relationships is captured by a different metaphor: figure-ground patterns! M. C. Escher’s art is riveting because of his skillful manipulation of figure and ground. In Moebius with Birds, white birds capture one’s attention and the background is black. Then, perception shifts and black birds become figure. The basic needs and longings of guys and girls are the same, but they do tend to organize figure and ground differently at times! What aspects of experience draw the eyes of adolescents?

Rapport or Report? You discuss the same incidents, but figure for girls is often ground for boys! Girls tend to use rapport talk, connecting with others through conversations, emphasizing relationships. Boys, on the other hand, report information, jokes, or stories. Recognizing these tendencies makes it easier for you (and adults!) to avoid misunderstandings.

Body Image. One’s own body is figure (!) to both sexes. Teens know the importance of physical attractiveness in contemporary society and express concerns about appearance. Girls compare themselves to lean, angular stars such as Calista Flockhart and worry about their curves. Boys of today are less satisfied with their bodies than boys of the past; anabolic steroids are sometimes seen as the way to “get buff.” Dolls reflect these unhealthy societal images. Barbie’s unrealistically proportioned figure is well-known, but male body images are becoming equally absurd. The early 1980s G.I. Joe has been replaced by one who would have a chest measuring over 50 inches and 20-inch biceps if he were life-size!

Life on the Bridge: Condoms don’t prevent heartbreak. “Safe sex” emphasizes preventing pregnancy or AIDS, but little mention is made of the impact on the heart. Girls often see the relationship as “figure” and intercourse as “ground,” whereas many boys show the opposite pattern. Girls expect romance because sex is a sign of love; boys expect sexual pleasure.

Years ago, Queen Elizabeth commissioned a potter to create a reversible figure-ground vase. The potter shaped it so the stark white edges formed the profiles of Queen Elizabeth and Prince Philip gazing at one another. The profiles draw the eye and then disappear as the vase itself captures attention. Yet, the prophet Isaiah’s words draw our attention from the shifting perceptions of our world, profiles or vase.  Instead, the hands of the potter shape our lives: “O LORD, you are our father; we are the clay and you the potter: we are all the work of your ands.” (Isaiah 64:7)

– Dr. Cathleen McGreal is a Professor of Psycology at Hope College and a certified spiritual director.