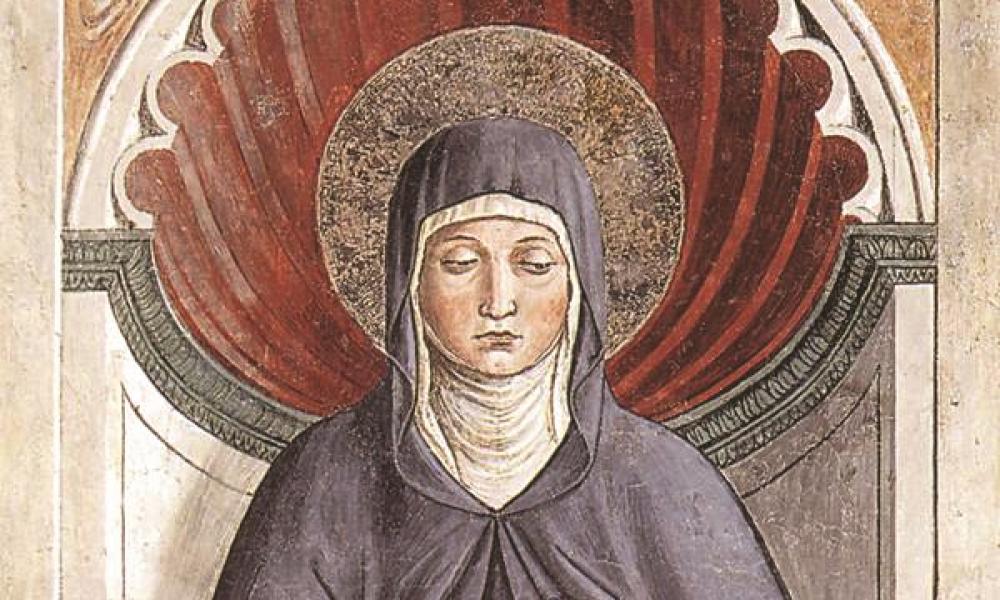 If there were a poster child for the power of prayer, it would be St. Monica, whose feast day we celebrate on August 27. Through her unceasing prayers and unfailing example of how to live a Christ-like life, St. Monica brought about the conversion of both her husband, Patricius, and her son, Augustine, one of the greatest Doctors of the Church.

Monica was born in 332 A.D. in Tagaste, North Africa. Her parents were Christians and she grew up in an atmosphere of devotion and Christian practice. However, her life became much harder when she was married to a man who was a pagan and made no secret of his dislike for Christianity. Patricius had a violent temper and often harassed Monica about her faith. He refused to allow her to have their three children baptized. She was able to teach them about Christianity and showed them how to live a Christian life, in direct contrast to her husband’s behavior, which included unfaithfulness to his marriage vows.

Rather than nag her husband, though, Monica was an attentive and devoted wife, obeying Patricius in everything except in matters of faith, where God won out. Her meek behavior and her steadfastness in her faith began to have an effect on her husband. And in time, Patricius’ temper cooled and he became more accepting of his wife’s Christianity.

Monica prayed continuously for her husband’s conversion, and finally, after 16 long years, Patricius was baptized in 370. One year later, he died, but Monica was content that she had done her job by making sure her husband was ready to go home to God.

But she still had her son, Augustine, to worry about. Her other two children, Navigus and Perpetua, had embraced Christianity, become baptized, and entered religious life. But Augustine had taken after his father and decided that a life of “wine, women and song” was more to his liking. Monica shed many tears over Augustine and pleaded with him to turn away from sin. But he ignored her tears, preferring his way to hers and even turning to heretical philosophies.

Monica didn’t give up on him. She prayed even more than before. Finally, after 14 years, Augustine converted and turned to Christ. His mother was with him when he was baptized during the Easter celebration in the year 387 in Milan, Italy.

Having achieved her goal of bringing her son to God, Monica felt that her life’s work was over. Returning home to Africa, she told Augustine, “Son, for mine own part I have no further delight in anything in this life. What I do here any longer, and to what end I am here, I know not, now that my hopes in this world are accomplished.” Soon after, she died, and was buried in the port city of Ostia.

St. Monica is the patron saint of married women and mothers (particularly mothers of wayward children), and also of victims of domestic abuse.