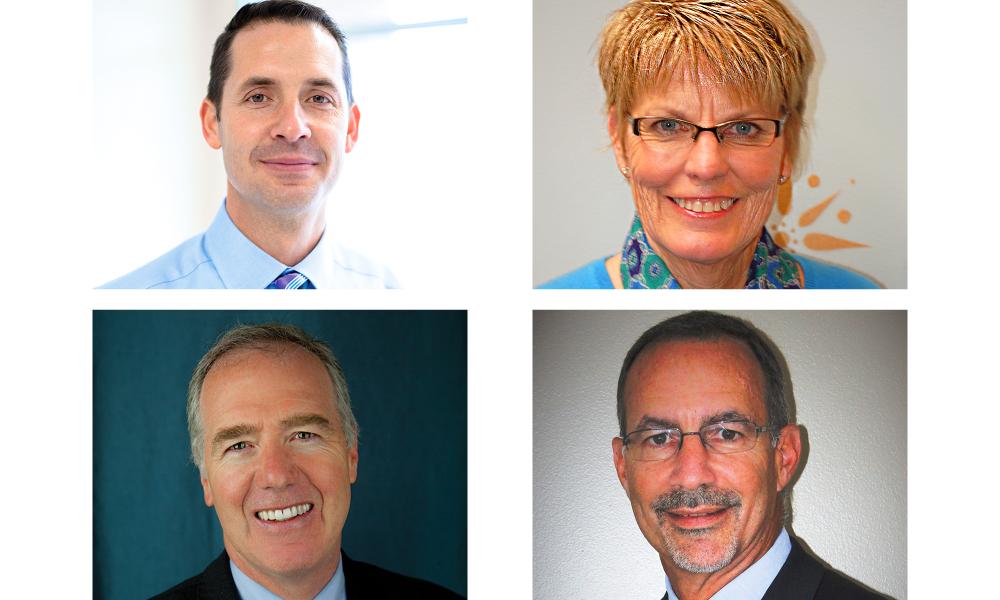 What is the role of a high school president?

Over the course of the past year, Bishop Earl Boyea appointed the following individuals as the first presidents of our four Catholic high schools when the Diocese of Lansing adopted the president/principal leadership model. Their role is to provide visionary leadership to the school, assuring the success of its organization, fund development and enrollment management. FAITH spoke to each president.

Tom’s passion for the mission of Lansing Catholic reflects his personal loyalty to the school as a 1988 alumnus. “As a student, the school was a perfect fit for me, and gave me the foundation and friendships I still rely on today,” he says. “I appreciate that our diocese, under the leadership of Bishop Boyea, acknowledges the complexity of these realities and has allowed this model to move forward.”

Previously, Tom served in the roles of principal, assistant principal, teacher and coach at the school. “The president/principal model is an acknowledgment that, in this day and age, for a Catholic high school to be successful, there is a need for an administrator who focuses on the internal, day-to-day operations of the school, as well as a need for someone to tend to the external, community building, fundraising and business aspects of things,” Tom says.

Lansing Catholic has been fortunate to improve its campus, adding a new chapel and updating its football stadium, in recent years thanks to targeted fundraising and generous donations.

Tom received his bachelor’s degree in education from Alma College. He and his wife, Michelle, have four children and are members of St. Thomas Aquinas Parish in East Lansing.

Elaine Crosby knows the importance of leading with a steady hand. As a veteran golfer and two-time winner of the LPGA, Elaine has brought her clear-cut focus to her role as president of Jackson Lumen Christi Catholic School

“My main duties are to handle the fundraising, facility management and overall business management of Lumen Christi,” she says “This allows the principal to fully focus on the education and well-being of our students.”

The Jackson native concentrates on involving the community in the development of a three- to five-year strategic plan for Lumen Christi and the rest of the Jackson Area Catholic Schools, and re-igniting the relationship between Lumen Christi and its many alumni.

“We have more than 10,000 alumni living all over the country that we have not connected with in many years. Engaging with these alumni is an important goal,” she says.

A graduate of the Ross School of Business at the University of Michigan, Elaine also served as the Jackson Area Catholic Schools coordinator since 2011 and was the interim advancement director for Lumen Christi High School in 2014. She is an active member of Queen of the Miraculous Medal Parish in Jackson.

Having spent more than 18 years as an educator and administrator, Michael Kenney, J.D., LL.M., is well-suited to traverse the halls of Catholic education as president of Father Gabriel Richard High School.

“Our school has an extraordinary history and a bright future due to the dedication of the principal, the faculty, staff, parents and students,” Michael says.

“I am dedicated to engaging the local community, serving students and their families and striving with the faculty to enable Father Gabriel Richard High School to be recognized as a national model of excellence,” Michael says.

Michael holds both bachelor’s and law degrees from the University of Notre Dame, and a master of law degree from the George Washington University School of Law. Michael and his wife, Mary Claire, have seven children and are members of Our Lady of Sorrows School and Parish in Farmington.

He previously served as vice president for planning and enrollment management at Madonna University, and in the development office at the University of Notre Dame.

From kindergarten until the present day, Rory Mattar has felt the positive pull of Catholic schools. Rory is eager to support the mission of his alma mater, and be part of assuring its future success.

“I’m excited to be giving back to the system which helped shape my life,” Rory says. “The president’s role is essential in establishing a faith-filled school environment, creating high expectations for the entire school community and acquiring resources to support the fiscal responsibility of operating our schools.”

Before becoming president, Rory served as dean of students and assistant executive director at Powers, as principal and assistant principal of Carman-Ainsworth High School and as a teacher at Swartz Creek, Bentley and St. Robert elementaries. He has also coached throughout his teaching career. With his extensive experience as an administrator, teacher and coach, Rory knows what it takes to garner community support and provide excellent educational experiences.

Rory attended Mott Community College and received his bachelor’s degree from Evangel University in Springfield, Mo. He also received a master’s degree in early childhood development and exercise science from Michigan State University. He and his wife, Bonnie, have five children and are members at St. Robert Parish in Flushing.