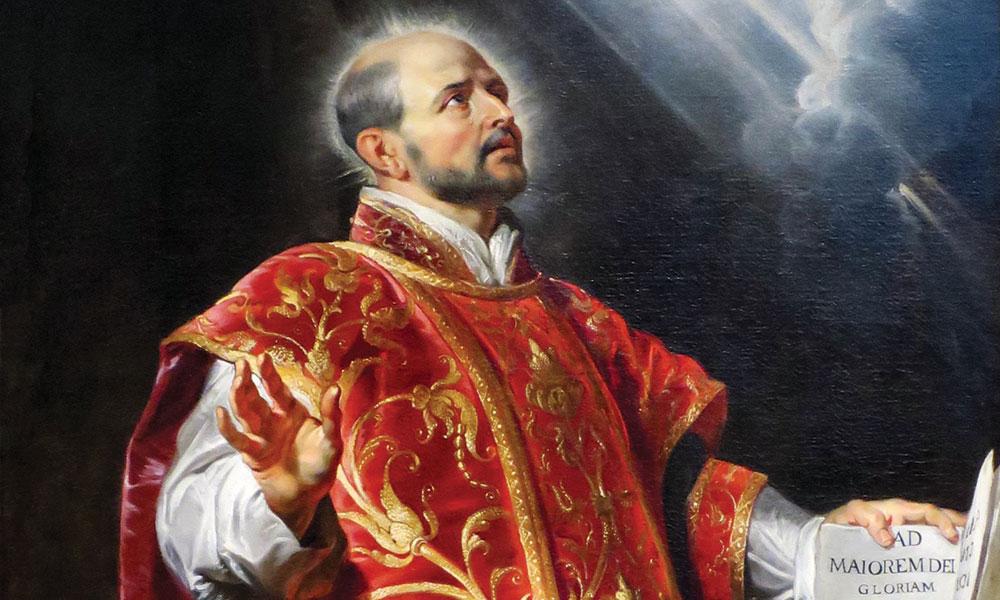 Founder of the Society of Jesus

Five hundred years ago, a cannonball changed the course of Ignatius of Loyola’s life. His shattered leg opened him to discerning the call to live “for the greater glory of God.” As a founder of the Society of Jesus (Jesuits), he became one of the most significant leaders in the Catholic Counter-Reformation of the 16th century, and his leadership and spirituality continue to guide Christians today.

Ignatius was born in 1491 in Loyola, Spain, the youngest of 13 children from a noble family. Knighted in 1517, he enjoyed military pursuits until wounded in 1521. During his long recovery, Ignatius was inspired by reading a collection of saint biographies, and The Life of Christ by Ludolph the Carthusian. Discerning that God was calling him to serve, he embarked on a pilgrimage to a Benedictine monastery in Montserrat, Spain. He spent the next year fasting and praying while living as a beggar in a nearby town, where he experienced visions and began writing The Spiritual Exercises. Discerning that he would accomplish more if well-educated, Ignatius spent 11 years studying before earning his master’s degree at a college in Paris.

Shortly after his ordination, Ignatius experienced a vision of God the Father saying, “I wish you to take this man for your servant,” and Christ responding, “My will is that you should serve us.” With Francis Xavier, Peter Faber and companions, Ignatius established the Society of Jesus in 1539, professing vows of poverty, chastity and obedience. When approved in 1540, Ignatius became superior general of the “contemplatives in action.”

Before his death in 1556, Ignatius’ Spiritual Exercises were approved and his Jesuit Constitutions were adopted. He began establishing Jesuit colleges and used the Latin phrase Ite, inflammate omnia, meaning “Go, set the world on fire,” to encourage his fellow Jesuits. The Society of Jesus has established schools, colleges and seminaries in Europe, India, Africa and America. Today, Jesuits serve in 112 countries.