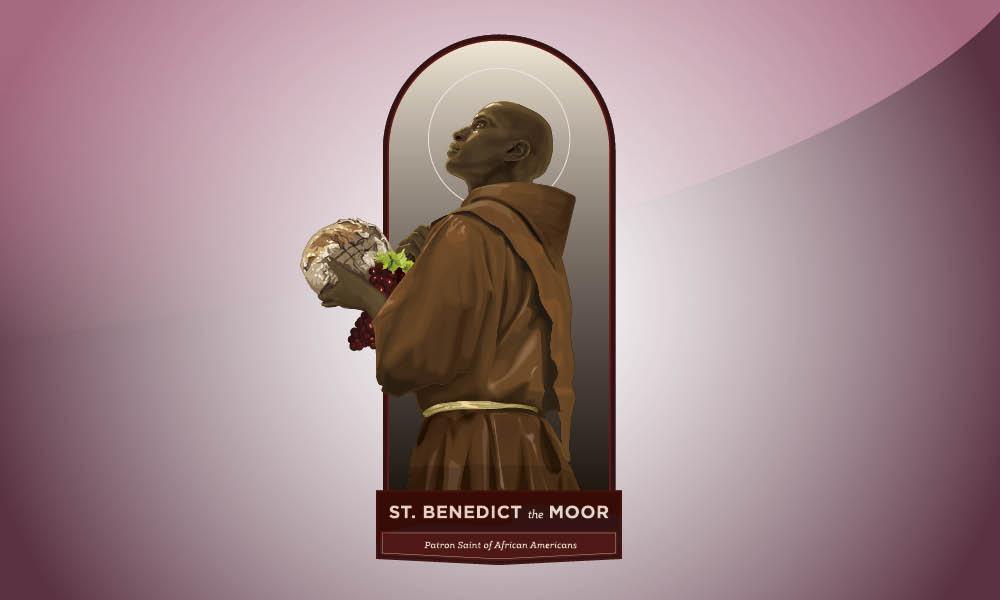 St. Benedict the Moor was the renowned lay leader of the Franciscan Brothers in Palermo, Sicily, in the 16th century, despite being illiterate and the son of enslaved African parents. Benedict’s prayerful humility, compassionate generosity, and wise, spiritual insight attracted both the simple and the powerful from all over Italy to seek his counsel. He was canonized in 1807, and later named the patron saint of African Americans.

Benedict the Moor was born in Sicily to parents who were taken from Africa and later became Christians. Benedict was given freedom at age 18 because of his parents’ hard work and loyalty. He worked as a day laborer, regularly spending his money on food for the poor and his free time caring for the sick. Often harassed because of his race and background, Benedict maintained his dignity and amicable demeanor. Recognizing his spiritual strength and integrity, the leader of a group of hermits living nearby invited him to join them in imitating the life of St. Francis of Assisi.

Benedict gave away all his possessions, joined the hermits as a cook, and reluctantly became their leader at age 28. In 1564 he joined the Order of the Friars Minor of the Observance when independent communities were ordered to join established religious orders.

As the cook at the Franciscan Friary, Benedict seemingly always had enough food despite limited resources. As his superiors realized the depth of his understanding of complex theology and Scripture, he was appointed Guardian of the community. Benedict successfully led the order in returning to a stricter version of the Franciscan rule.

At the end of his life, Benedict asked to retire to the kitchen where he resumed feeding the poor, caring for the sick and counseling the powerful who came to visit. He died at age 63 on April 4, 1589. Tradition holds that he died at the very hour he had predicted.