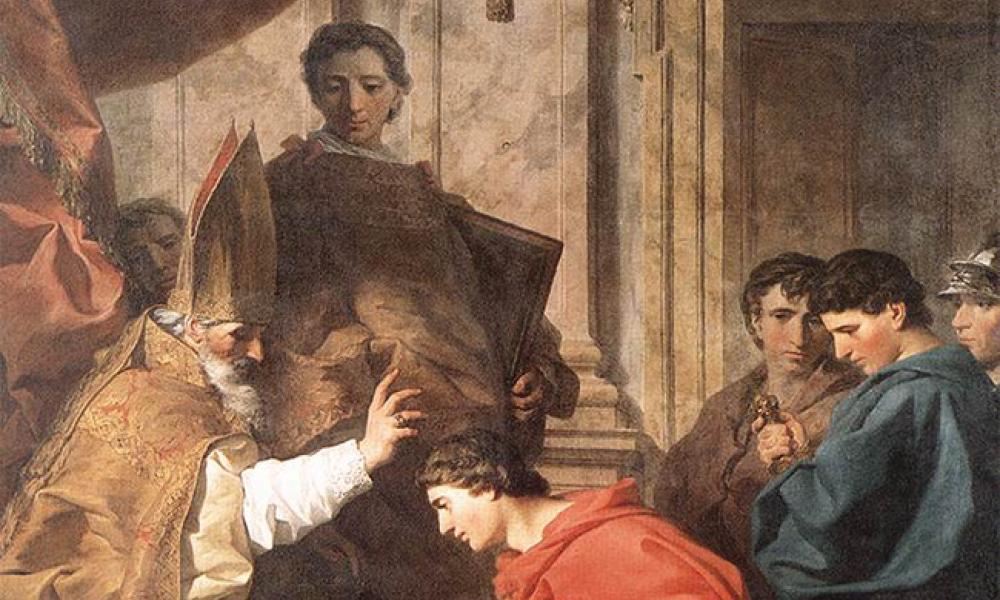 The life of St. Ambrose (b. 337 AD) may be one of the best examples of how God’s plans can be completely different from our own. And St. Ambrose’s response provides a wonderful message for how saying “yes” to God and striving for holiness in our own lives can be an important witness to others.

As governor of two Roman provinces headquartered in Milan, Ambrose attended the election of a new bishop to simply help keep the peace between the Nicene Church and the Arians. Well-loved for his fairness and charity, the assembled crowd called for his appointment to the see and he suddenly found himself the new bishop of Milan. Not yet baptized a Christian or versed in Christian theology, he refused and went into hiding. But, with the Emperor Gratian’s approval, Ambrose finally accepted. He was baptized, ordained and consecrated the bishop of Milan within the week. Popular, persuasive and a fierce defender of the truth, Ambrose became one of the most influential figures of the fourth century and of Church history.

Known primarily for his defense of Church teaching against the growing Arian heresy in his time, Ambrose repeatedly found himself tangling with emperors, but his humility and generosity fueled his popularity and increased his political power.

Ambrose is one of the four original Latin doctors of the Church, along with Augustine, Jerome and Gregory the Great. His extensive writings include treatises on ethics, the priesthood, sacraments, the role of Mary and the liturgy. A late student to Scripture, Ambrose used his background in Greek philosophy to share the lessons of the Old Testament through the lens of its heroes. Ambrose is credited with composing hymns that are the foundation for hymns used to this day.

His influence as an orator may be best demonstrated by the impact his influence had on St. Augustine. Tradition teaches that Augustine was unimpressed with Christian theology, but was forever changed by meeting Ambrose. Augustine’s mother, St. Monica, credits Ambrose with Augustine’s conversion, calling him, “An angel of God who uprooted her son from his former ways and led him to his convictions of Christ."

Ambrose is the patron of Milan, beekeepers, beggars and learning. His feast day is Dec. 7, the date he was consecrated bishop. His zealous embrace of God’s plan for him can be an inspiration for all who say “yes” to God’s unexpected plans for them.