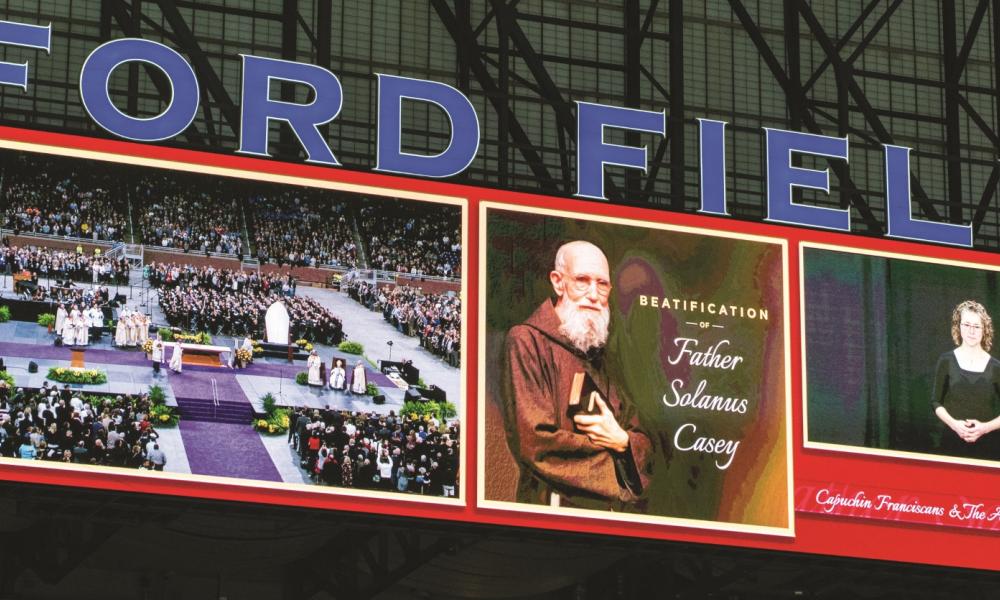 On Nov. 18 at Ford Field in Detroit, more than 60,000 Catholics gathered to hear Cardinal Angelo Amato, prefect of the Congregation for the Causes of Saints, read aloud the apostolic letter from Pope Francis proclaiming Father Solanus Casey, a Capuchin Franciscan friar from Detroit, “Blessed Solanus Casey.” The stadium roared its approval after Detroit Archbishop Allen H. Vigneron read the proclamation in English.

Father Solanus Casey, who died in 1957, is well-known in the Detroit area for his miraculous healings and intercessions, and for being a compassionate listener, especially for the sick and the poor. Hundreds, perhaps thousands, of healings are attributed to Father Solanus over the course of his lifetime. Pope Francis recognized the authenticity of one miracle involving the healing of a woman in 2012. As a fellow Capuchin, Cardinal Sean O’Malley, OFM Cap., archbishop of Boston, said: “It was just so moving seeing all those people praying in the stands, especially when you realize the devotion and the faith that motivate the people to come out on a rainy day and be part of such a joyful, beautiful, faith-filled celebration.” Cardinal O’Malley continued, “His availability and his closeness to people and love for the poor is what inspires people. The homeless, those who have great problems and challenges in their lives. He was so present to them.” About 35 bishops, 400 priests and deacons, more than 200 Capuchins and 300 members of the Casey family joined the thousands of faithful at the Mass.