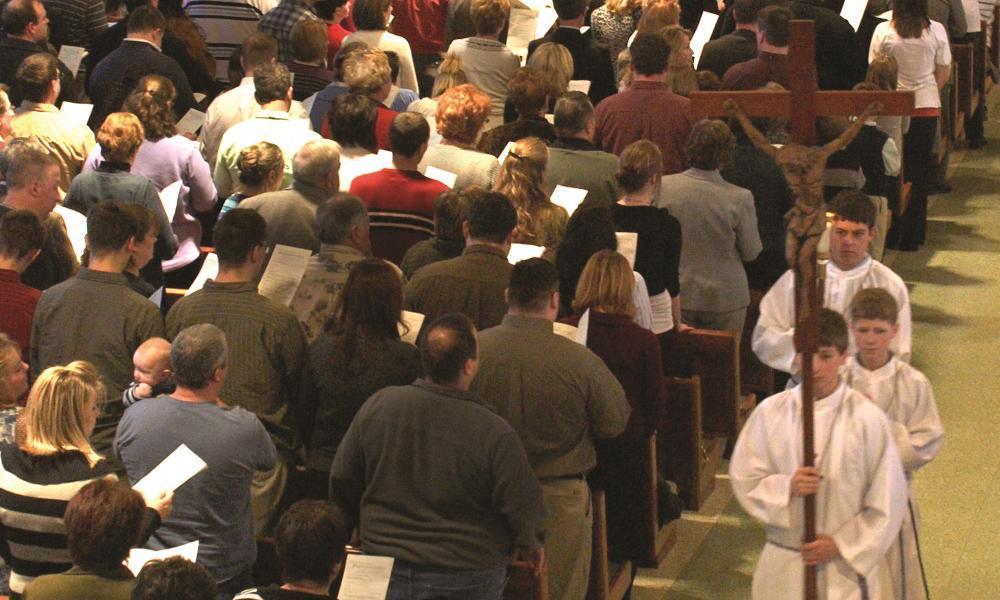 Same Mass – New Words What is Liturgy? Part 1 of a 14-Part Series

In the next year or so, a new edition of the Roman Missal will be issued. You will notice some changes in the words of the Mass. In this series on the liturgy, FAITH explores various aspects of liturgy to prepare you for the upcoming changes.

It’s Sunday morning. We rise, get dressed, gather up the kids, get into the car and travel to our local parish. We nestle into our usual pew, say a brief private prayer and stand when it’s time to sing the opening hymn. We follow the usual routine. We faithfully fulfill our obligation. But what ancient ritual have we begun? What awesome mystery have we entered into?

Liturgy is the official public worship of the church. Our most important liturgy is the Mass, but we have other liturgies, such as funerals, blessings and all our sacramental rites. The word liturgy comes from a Greek word, leitourgia – “the work of the people.” The work is actually God’s work and he invites all of us to participate in it (Catechism of the Catholic Church 1069).

Liturgy, by its very nature, is communal. We enter into relationship with the Trinity and with one another. We also enter into relationship with others all over the world who are gathering around the altar of Christ’s word and Eucharist. The assembly is not a collection of people praying in the same place, but a community of people, who “express in their lives and manifest to others the mystery of Christ and the real nature of the church” (Constitution on the Sacred Liturgy, 2).

And it is this mystery of Jesus Christ that is the only “theme” of any liturgy. The paschal mystery is the life, passion, death, resurrection and glorious ascension of Jesus Christ and our participation in it! Perhaps it’s that second part that we least understand – that “dying he destroyed our death and rising he restored our life” (Easter Preface I).  Each liturgy, then, is a work of our ongoing redemption. We follow the command to “do this in memory of me.” But we do not merely remember what Jesus has done for us, but, with Christ as the head of every liturgical celebration, it is a remembering that makes present – anamnesis.

“To accomplish so great a work [our ongoing redemption] Christ is always present in his church, especially at its liturgical celebrations” (SC 7). Christ is present not only in the person of his minister … but especially in his eucharistic elements. He is present in the sacraments and his in his word “for it is Christ himself who speaks when the holy Scriptures are read …” (SC 7). Christ is present, too, in our assemblies, for he promised wherever two or more are gathered in my name, there am I in the midst of them” (Mt 18:20).

And so we gather – Jesus, you and me. We address our prayers to God the Father, the source of all liturgy. We acknowledge all that he has done for us and give him thanks and praise (CCC 1081).  We are inspired by the grace of the Holy Spirit. And we seek God’s continuing favor through his son, Jesus Christ.

We pray with words that express and foster our faith. These prayers are both ancient and new. They are crafted carefully, based upon the principle of lex orandi, lex credendi – “the words of our prayer are the words of our belief.” We never pray anything that we don’t believe and we don’t believe anything that is not expressed in our prayer. For example, Pope Pius XII proclaimed the dogma of the assumption in 1950, based on the fact that the church had long celebrated it in its liturgy.

There is always a “tension” in the way we pray – a good kind of tension that comes from fullness. We are thinking in the past, present and future. We speak about the “already” and the “not yet.” We are remembering what God has done for us, acknowledging what he continues to do for us now, and anticipating what we will experience in the heavenly kingdom.

The liturgy has other “languages” besides the spoken word. In signs and symbols, in posture and gesture, in silence and in song, in our buildings and our art, we give expression to the faith we share.

We have been invited to this liturgy by the living God. We have encountered him in a special way and been sanctified by his grace. We have been nourished by word and sacrament, the ordained minister and by each other.

And we are dismissed until we can all meet again –perhaps next week, perhaps in the heavenly kingdom. We are reminded to go in peace to love and serve the Lord. Some of you may remember the Latin words that ended our Mass, ite missa est, “Go, it is the sending.” From that word missa we get “mission” – our duty to go out and spread the good news and to serve the Lord. From that word, too, we get “Mass” – a liturgy which empowers us to do so.

Krakow is one of the oldest (dating back to the 7th century) and largest cities in Poland. It has traditionally been one of the leading centers of Polish academic, cultural and artistic life. It is one of Poland’s most important economic centers.

Krakow also is the home of the Lagiewniki Sanctuary, which is the world center of Our Lord’s Mercy. Every year, more than 2 million pilgrims visit the sanctuary where the convent where St. Faustina Kowalska lived and died originally stood. The brick convent of the Sisters of God’s Mother of Mercy is now part of the sanctuary.

The original painting depicting the Merciful Jesus who appeared to St. Faustina in a vision in 1931, with the inscription in Polish, “Jesus, I trust in you” can be seen in the convent’s chapel, along with the saint’s relics.

• Wawel Cathedral is Poland’s national shrine that dates from the 14th century. Its giant bell ranks among the world’s largest and most Polish kings and greatest national heroes are buried here.

• The Basilica of the Virgin Mary is a large Gothic church and boasts the world’s largest Gothic sculpture (a 42-foot high and 36-foot wide piece by Veit Stoss).

• St. Norbert’s Convent on the Vistula River has been home to Krakow’s once-powerful Premonstratensian Sisters since the 12th century.

St. Ambrose is the first doctor of the church and called the Pastoral Doctor. He is also called the “Patron of the Veneration of Mary.”

St. Ambrose started his career as a young lawyer/politician and became the people’s choice to become bishop of Milan (374-397) when the Arian bishop died. He had great presence and was one of the most influential men of the fourth century. He was known for his preaching, opposition to Arianism and friendship with St. Augustine (whom he converted to Christianity and baptized).

He is the patron saint of candlemakers and learning.