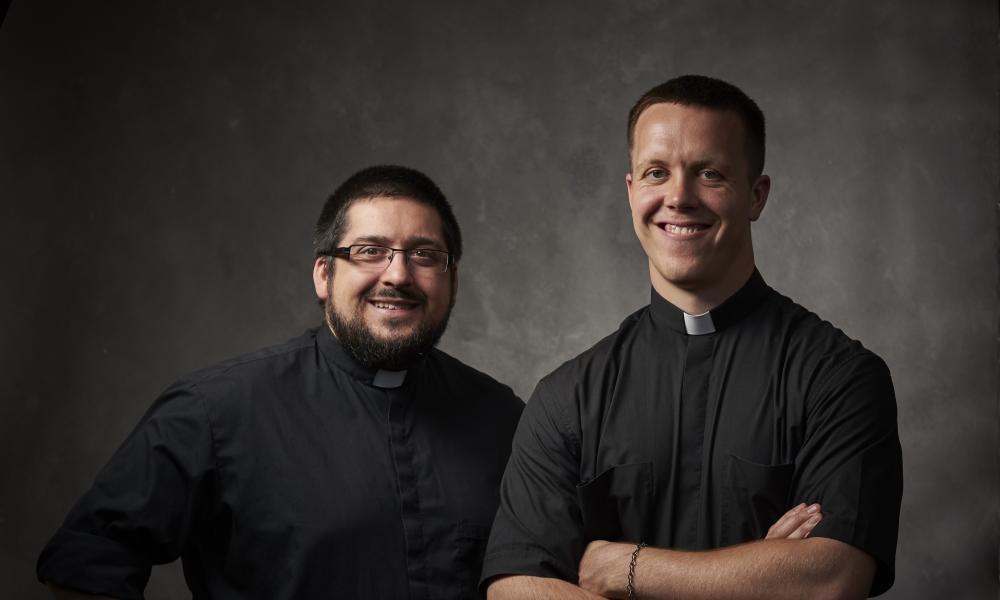 Father Joseph Campbell was raised in a family of 10 from Ann Arbor. He is assigned to St. Patrick Parish in Brighton.

How did you know you were called to the priesthood? I wanted to be a priest during my whole childhood. In high school, I began to try to talk myself out of it because of girls, but I eventually began to realize that I was not going to be at peace unless I at least gave seminary a chance. So I entered college seminary after graduating from high school, hoping at first that I would get kicked out or at least quickly discern that God was actually calling me to be married. But with time, I began to be more open to God’s call and to ask for the desire for the priesthood, if that was what God really wanted.

The turning point for me came at the end of the third year in college seminary when I finally said to God that if he wanted me to be a priest, then that’s what I wanted to do. From that point on, my desire for the priesthood only began to grow. After my sixth year of seminary, I knew that my discernment was over. God was making it abundantly clear to me that he was calling me to be a priest in the Diocese of Lansing, and the time had come to commit to that and to present myself to the bishop for holy orders.

What advice do you have for discerning a vocation? Pray, pray, pray, pray! If you are sincerely seeking after God and his plan for your life, he will make it clear to you. But this all takes time and hours and hours before the Lord in the Blessed Sacrament. The hardest thing about discernment is that it takes so much patience and perseverance. Also, find a spiritually mature person to talk to about what you are experiencing in prayer and discernment. Often, others are much better at seeing things going on in your spiritual life than you are.

What are your thoughts about living a priestly life? I’ve only had a little taste of the priestly life so far, but what I’ve experienced is incredible. Priestly life is intimate, exciting, challenging, draining, dynamic, diverse, exceedingly public, yet almost monastic, multifaceted, intellectual, pastoral, self-giving and so much more. Priesthood is certainly not boring! It is a wonderful life, and I can’t wait to dive in and experience it fully after being ordained.

Father Anthony Smela’s home parish is St. Mary Queen of Angels in Swartz Creek. Growing up a University of Michigan fan, he is very pleased that his first assignment is at St. Thomas the Apostle in Ann Arbor.

What led you to answer God’s call to become a priest? There was a nine-month period in my life in college when I was flat-out miserable. I thought I had all the things I wanted, but something was missing. I realized that I was only giving God the leftovers of my life, and I decided to go out on a limb and give him more. In this time, God began to place the idea of the priesthood in my head over and over again. It was then that I gave in and made the decision to enter the seminary. It would take another few years of discernment in the seminary to realize that God was also calling me to the priesthood.

What message would you pass along to those who want to serve God, but do not know how? Where is the Holy Spirit moving your heart? Whenever I think about the priesthood and working with people in a parish, my heart begins to burn with desire. Where do you experience the Holy Spirit burning your heart with desire? Be patient, and give the Lord time to speak to you.

What has seminarian life been like for you? The journey has been incredible. I’ve been able to do things I never thought possible. I’ve traveled to the Holy Land, received a master's degree and played on an ice hockey team, just to name a few of the incredible opportunities God has given me since entering seminary. I’ve learned firsthand that you cannot outdo God in generosity.

I’m not the academic type. I have to admit that the academics involved in seminary were difficult. I didn’t have a desire to even go to college after high school. Now that I’ve finished my 10th year of school after graduating high school, I have to say that there is nothing else I would have rather done. Not that I enjoy academics any more than I did (because I don’t), but I knew I was doing God’s will through it all. That’s the key. Doing God’s will, even if it’s difficult, is more fulfilling than anything else.