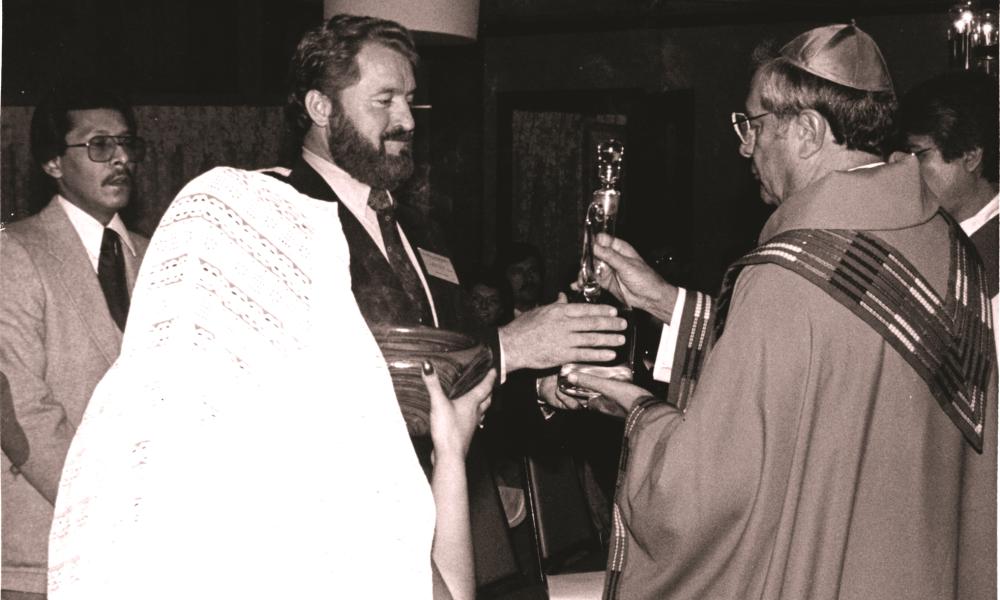 The Liturgy of the Eucharist begins with the preparation of the gifts. Although this part of the Mass was more elaborate in the Middle Ages, it has been restored to its earlier simplicity. The altar has been bare up to this point; now the server brings the book (sacramentary) and vessels over and members of the congregation bring forward the community’s offerings of bread, wine and financial gifts. The presider prays, asking a blessing for the gifts and those who offered them.

The Eucharistic prayer follows, beginning with thanksgiving, expressed in the preface. The preface invites us to praise and worship, and offers specific reasons for doing so – based on the season or particular celebration. Next is the acclamation of praise, which is sung by the whole assembly: “Holy, holy, holy ...Hosanna in the highest.”

The priest then prays the epiclesis, asking the Holy Spirit to come down upon the gifts and on us, transforming the bread and wine into the body and blood of Christ and transforming us into people who live in Christ’s image.

He then tells the story of the first Eucharist in a few words, mentioning the meal in which it occurred. The words of institution and consecration are spoken ¬– “He broke the bread, gave it to his disciples and said, “Take this all of you and eat, this is my body.”” And by the power of the Holy Spirit, the bread becomes the real presence of the body of Christ. The same follows with the wine as it is transformed into the blood of Christ.

After the words of institution, we sing the memorial acclamation – “Christ has died, Christ is risen, Christ will come again” or one of the other available choices that proclaims the essence of the paschal mystery.

Prayers of remembering, offering and intercession follow. We ask God’s blessings on the church, its ministers, and all its members – both living and dead.

The Eucharistic prayer ends with a doxology, or statement of praise. The priest elevates the consecrated bread and wine and sings, “Through him, with him and in him, in the unity of the Holy Spirit, all glory and honor are yours, almighty Father, forever and ever.” The people sing a profound, “Amen,” their assent and belief in all that has taken place in the Eucharistic prayer.

We follow by praying the Our Father, the prayer Jesus taught us. We move into the peace prayer and a sign of peace among the congregation. In this, we are following Jesus’ command to reconcile before coming to the altar. As the hosts are broken and placed in vessels for distribution, we pray the Agnus Dei, the Lamb of God. We express our sorrow for our sins in the prayer, “Lord, I am not worthy to receive you ...” Then we rise in unity and process to receive the body and blood of our Lord, saying, “Amen” to indicate our belief .

After prayers of thanksgiving, the Mass concludes with a blessing and a statement to go and serve the Lord, living out the Eucharist we have received.

Kneeling is a gesture of penitence and supplication. Although the general Jewish posture for prayer was standing, penitents and supplicants knelt on occasions of great solemnity or urgency. For example, we read about Solomon kneeling before the multitudes, Jesus kneeling to pray in the Garden of Gethsemane and Stephen falling to his knees in the midst of an ecstatic vision before the Sanhedrin. From about the fourth century, kneeling was recognized as the usual attitude for private prayer. During the Mass, we kneel from the end of the Sanctus (the Holy, Holy, Holy) to the great Amen that occurs just before the recitation of the Our Father. In the United States, the bishops received an adaptation to the general norms of the church to allow for kneeling after the Agnus Dei (the Lamb of God)

The church devotes special veneration to Mary as the mother of God. As such, there are solemnities devoted to her, as well as a host of feast days and memorials. Some are based on biblical events, such as the Annunciation; some on specific devotions, such as Our Lady, Queen of Peace; some on dogma, such as the Immaculate Conception; and some on geography, like Guadalupe. Additionally, May is traditionally the month of Mary and October is the month of the rosary.

The chasuble is the most visible of the vestments the priest wears at Mass. The chasuble is an adaptation of secular garments worn during the early church. The presider wore his newest and cleanest everyday clothes to preside at Mass. As secular clothing changed, the church reserved the chasuble for liturgical functions. Its name derives from the word, casula, or little tent, which it resembled in its ability to cover the whole person.

The altar is the table on which the elements of bread and wine are placed during the Mass. In the earliest days of the church, this table was called the trapeza Kyriou, or ‘table of the Lord.’ It was generally made of wood or stone and was identical to ordinary dining tables. Catacomb frescoes show groups gathered around the trapeza as at a meal. The term altar was studiously avoided by Christians until the fifth century, due to its pagan sacrificial connotations.