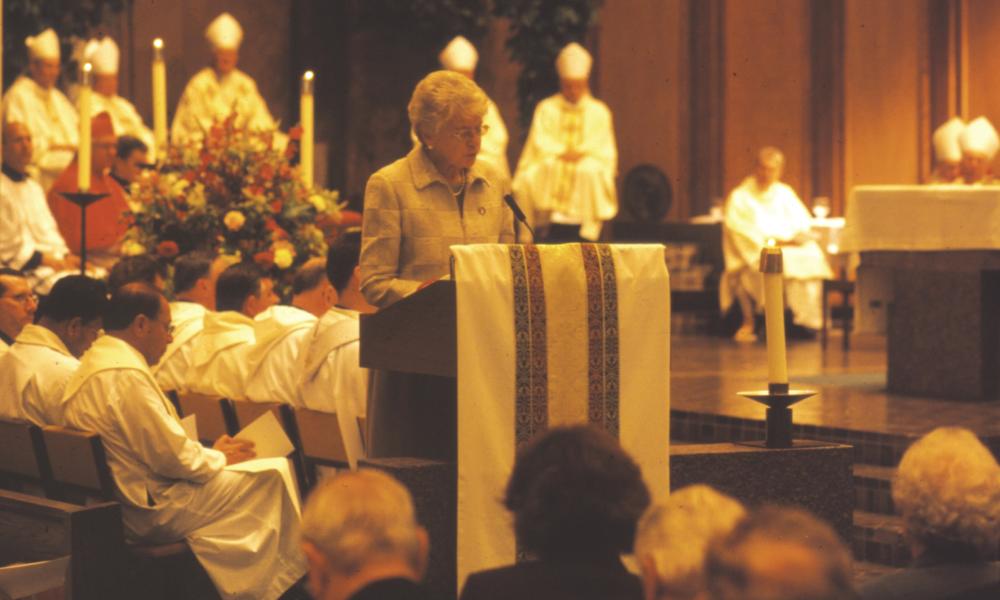 The Second Vatican Council reformed the way the Liturgy of the Word was structured. The church created a three-reading cycle plus a responsorial psalm, drawing from the Old Testament, the New Testament and, of course, the Gospels. In this way, we are exposed to a rich variety of readings throughout the year.

The Lectionary, the book containing the readings, is arranged in a three-year cycle. Cycle A proclaims the Gospel of Matthew; Cycle B, Mark; and Cycle C, Luke. The Gospel of John, with its emphasis on the resurrection, is read throughout the Lent and Easter seasons, and also during Advent and Christmas. In the Easter Season, the first reading is from the Acts of the Apostles. During the rest of the year, the first reading is from the Old Testament, the second from the letters of the New Testament or Revelation. The readings culminate with the Gospel.

A homily follows, which explains the Scripture readings and helps us draw parallels with our daily lives, so that we can apply the teachings we’ve just heard.

We then recite the Nicene Creed, a brief statement of our most fundamental beliefs. We profess our faith in God the Father as creator, in his son Jesus, in the Holy Spirit and in the basic tenets of the church.

We then offer prayers for all the needs of our world, our country and our local community. We join our voices together to ask the Lord to “hear our prayer.”

Through prayer, singing, the hearing of Scripture and the contemplation of the lessons learned, we have prepared ourselves to present our gifts to the Lord and enter into the next phase of the Mass, the Liturgy of the Eucharist.

Lector (reader): Generally, a lector is a member of the parish trained to proclaim the Scripture readings from the Old and New Testaments. He or she approaches the ambo reverently, and reads in a clear and loud voice from the lectionary. The term ‘lector’ also refers to one of the minor orders to which a man is ordained on the road to the priesthood.

Standing has always been a gesture of deep respect. We stand in the presence of royalty, when we meet dignitaries, or when we’re introduced to someone. Many people still stand to greet women or their elders. It is only natural that this respect would flow into our liturgical life, as well. Standing to pray was the usual posture in the Jewish temple and synagogues: Jesus spoke of the hypocrites who love to stand and pray in the synagogues and his parables about the Pharisee and the publican both mention them standing to pray. Thus, during the Mass, we stand during the reading of the Gospel, we stand during many of the prayers and, in the United States, the norm for the reception of holy Communion is standing.

Easter is the most profound celebration of the church’s year. It begins with the most beautiful liturgy of the year, the Easter Vigil Mass. During the Easter Vigil, catechumens are baptized and candidates from other faiths welcomed. The season of Easter lasts 50 days, until Pentecost. It is to be celebrated as a continual feast day – one ‘great Sunday.’ The liturgical color for Easter is white.

The stole is the long strip of material that hangs around the neck of a priest during the performance of sacramental functions. It is also worn diagonally across the chest by deacons who are assisting at Mass. There is a small embroidered cross in the center of the stole, which the priest kisses before donning it. The stole is a symbol of the office of priest or deacon.

The ambo is the podium or lectern from which the readings are proclaimed. It takes its name from a word meaning elevated and is based on the raised platforms from which rabbis read. The ambo should be stationary and located in a place where the ordained ministers and lectors can be easily seen and heard by the assembly.