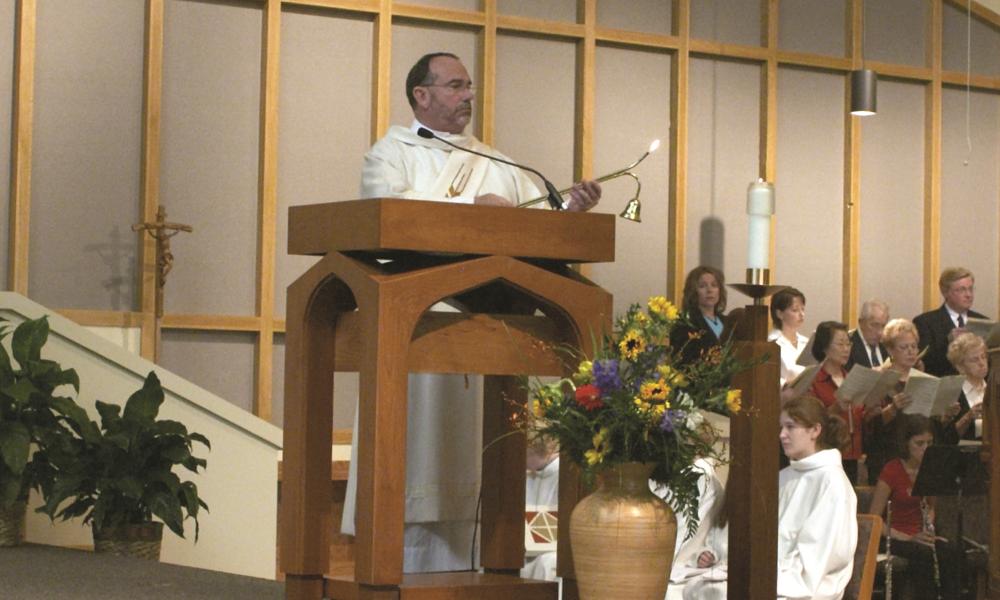 The central liturgy, or public prayer, of the church is the Mass. The Mass derives its name from its former final words of dismissal: Ite missa est – “Go, it is the sending.”

We are to leave the house of worship and carry the love of Jesus we have experienced out into the world. Today’s Mass resembles the liturgy of the early church in many ways. From the earliest days, the liturgy revolved around the Eucharistic meal. The word eucharist means “thanksgiving” and that is exactly what the early Christians did – they gave thanks for the presence of Jesus in their midst. From the beginning, the assembled brothers and sisters believed that Jesus was truly present with them – in their midst as they gathered and in the bread and wine they blessed and shared. The early churches were in members’ homes or outdoors.

Passover ritual was incorporated into the Eucharist – continuing in many of the prayers we still utter: "Blessed are you, Lord God of all creation ... "

At the end of the era of Christian persecution, after an edict by the Emperor Constantine, communities became much larger due to the freedom to gather openly. They needed larger buildings and began to gather in public buildings like large courthouses or basilicas. Christians added rituals they had encountered there – such as great processions with vesture and incense.

As the large church buildings were peopled with rapidly catechized members, the act of liturgy became more invested in the person of the priest. By the Middle Ages, the priest was perceived as reciting the Mass on behalf of the people, who often could not hear him nor understand what had once been the vernacular or common language of Roman citizens, Latin. This ancient language was now reserved for academics. The result was that the gathered assembly said private prayers while ‘hearing’ the priest ‘say’ Mass. An emphasis on the divinity of Jesus and his role as judge meant that reception of Communion was a rare occurrence among the laity and the cup was withdrawn from the people for fear of spillage.

In the mid 1800s, there was an increased interest in liturgical renewal and lay participation in the Mass. By the early 1900s, the congregation began making some of the responses that had previously been made only by altar servers.

In the early 1950s,Pope Pius XII restored Holy Week and the Easter triduum to earlier practices. In 1963, the first document promulgated at the Second Vatican Council, The Constitution on the Sacred Liturgy, called for a greater appreciation of the theology of liturgy and for the reform of all our liturgical books, including a ‘new’ order of the Mass. Once again, the priest faced the people. And once again, they could understand the readings and prayers and could participate more fully with songs and acclamations.

Vatican II did not bring new elements to the Mass as much as it restored a sense of the early church with us today. As the early followers of the Risen Lord knew that Jesus was with them, so do we fully enter into a union with him at Mass. And so, when the words of dismissal are spoken – “The Mass is ended,” we reply with great joy, “Thanks be to God.”

Where did we get the liturgical calendar?:

The liturgical calendar, like the secular one, is a rhythmic observance of ebb and flow. The church seasons evolved, gradually codified into the calendar we know today. Easter and Pentecost were the earliest special observances. The entire paschal mystery, including the triumph of Easter, is celebrated every Sunday during the year.

The baptismal font is the basin containing blessed water in which new members of the church are baptized. It is generally made of stone, although glass and metal are also used. If possible, the water in the font should be moving – this is the ‘living water’ by which we are reborn into the faith. In the earliest days of Christianity, baptism took place in rivers or the sea. As specific containers for baptismal waters were built, they were often called swimming-baths or natatoria, as they were large enough for total immersion. The term, fons, or ‘spring of water,’ became the name of choice, thus leading to our word, font.

The gesture of bending one knee to the ground arose during the Middle Ages as a sign of penitence and adoration. Christians in the early church prayed while standing. The Romans introduced the custom of prostration before Caesar as a god, which was subsequently adopted by Christians. This evolved to a profound bow, which continues in the East. By about 1502, the custom of genuflecting before the Blessed Sacrament had replaced the deep bow. Now, it is customary to genuflect when paying reverence to the Blessed Sacrament in the tabernacle. When the tabernacle is empty, as it is from after the Mass of the Lord’s Supper on Holy Thursday until after Communion on Good Friday, we do not genuflect.

Ordained clergy members often wear black suits with a white collarknown as the roman collar. The collar originated in the 15th century,when it was a popular secular practice to turn one’s linen collar upand over the outer garment. By the 19th century, it became customary toinsert a starched linen collaro onto the rabat, the high-collared,backless vest worn under a cassock.