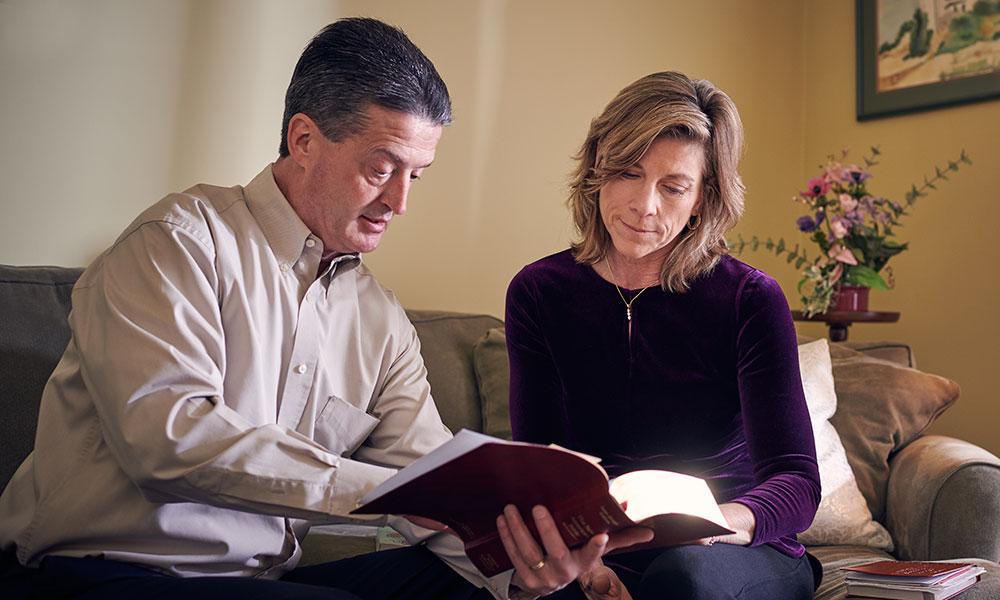 Morning prayers changed everything for Sherry and Joe

“Transform us. Transform our lives.”

Every morning, Joe and Sherry Dunn hold hands on their living room couch and pray these words of openness and vulnerability to God working in their lives.

Taken from Matthew Kelly’s “Prayer of Transformation,” this daily ritual as a couple has indeed changed their lives – and their marriage. High school sweethearts and married for 33 years, the Dunns have not always considered themselves the type to pray with and over each other.

“We didn’t think we were ‘those people,’” Sherry laughs.

For the past four years, though, she and Joe have set aside about half an hour each day to read and reflect together on the day’s Gospel or other spiritual reading, pray the “Prayer of Transformation,” and share how they’ve seen moments of that transformation in their lives.

“I just started seeing Jesus much more in other people,” says Joe, who runs an insurance agency in East Lansing, where the couple also attends St. Thomas Aquinas/St. John Church and Student Center.

“We’re less likely to miss those moments, those graces,” Sherry adds, even if it’s as simple as an interaction at the grocery store.

From there, they’ve found themselves having new types of conversations: How would they tithe? Where is God leading them? How is he asking them to evangelize? They’ve noticed a deeper sense of gratitude within themselves and a desire to give back, to mentor young couples – and all because they started praying together.

The “total pivotal point” was a new couples prayer series at St. Thomas, now led annually by Deacons James Kasprzak and David Zygmontowicz, usually during Lent. The weekly meetings aim to give couples a practical foundation of how to pray together.

The Dunns had gotten into the habit of daily personal prayer, especially after their three children began moving out of the house. But learning to pray as a couple was new – and awkward at first.

“You’re opening up,” Joe explains. “A lot of times you don’t share those deep prayers you have inside.” Both he and Sherry encourage couples who are uncertain about this new level of vulnerability to stick with it, just like any new habit. Even just a few minutes a day, or a line from the Gospel, is a worthwhile starting point, Joe says.

God will honor any starting point a couple finds themselves at, she says. “If someone has a desire to improve their marriage or their faith life, they don’t have to worry about ‘how will I do this.’ Just start.”

The Dunns believe so strongly in the fruits of praying together that they’ve focused their efforts on encouraging other couples to do the same. They’ve gone back to the couples prayer series, this time to share their story, and they meet with engaged couples from the parish throughout the year. They try to stress that there’s no one way for a couple to pray together: what’s important, Joe says, is “whatever works best for the couple.”

Working with younger couples seemed a natural opportunity, Sherry says, when she and Joe began praying about how God was calling them to share their gifts.

“It’s not that we have a perfect relationship,” she says, but “we have this gift of a healthy marriage. We want to give back.” They see themselves as a sounding board for the engaged couples who come to their home for conversation, encouragement and practical advice on how to live out the sacrament of marriage. Above all, Joe says, they want them to know God’s presence in their relationship.

“I hate being put on a pedestal,” Sherry says, “but we want other people to feel as blessed as we do” by the new level of openness and intimacy they’ve found through regular prayer together. She and Joe describe the sense of peace and freedom that settles on them during their morning prayer time.

“Because Jesus is there with you,” Joe says, “he’s got a big open heart, and he doesn’t judge. We’re just so grateful we found this.”

Sherry converted to Catholicism in their early years as a young family, and learning to pray with Joe has only deepened her awe of marriage as a sacrament. “One of our missions in life is to help each other get to heaven,” she says. “Through couple prayer time, we can do that.”

The Dunns end their prayers by tracing the sign of the cross over each other in blessing.

“God, continue to be in Sherry’s mind,” Joe prays, “and in her eyes to see your beauty ….” He continues, marking a cross on her lips, ears and heart, before she does the same for him. Then, with a kiss, they move on to begin their day, ready to meet Jesus wherever it may take them.