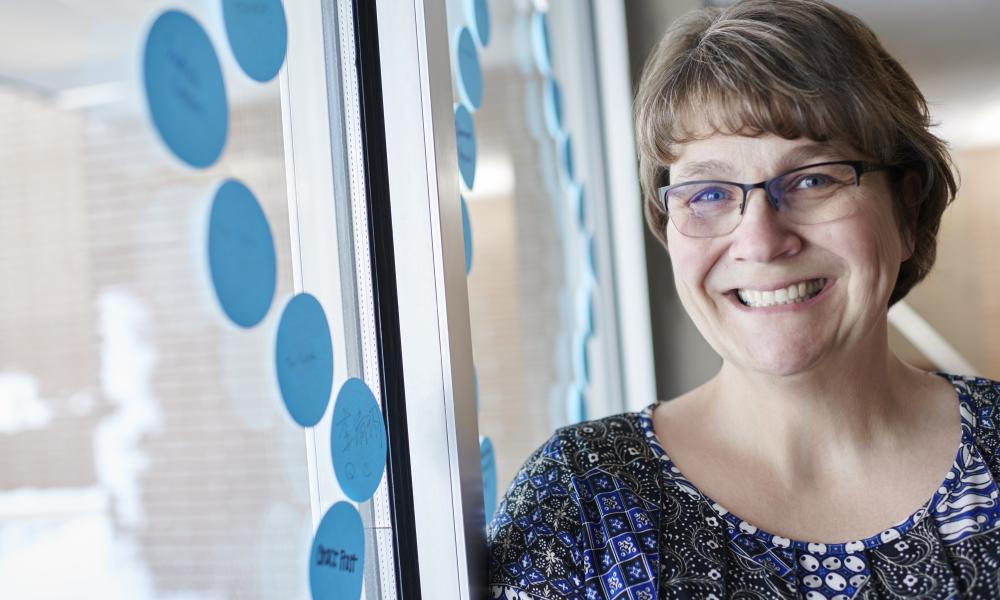 Surprising even to her, Jan Tietsort’s story of how the Lord brought her into the Catholic Church is one she loves to share as evidence of God’s goodness, patience and perseverance.

“It took me so long to get my first teaching job that I was going to stop looking and go another route. I finally came across a position at Hackett Catholic Central in Kalamazoo and I got the job. I worked there for three years, and then got a job at the Church of the Resurrection in Lansing, and then Lansing Catholic High School in 2000.”

Though she didn’t recognize it at the time, Jan’s years in each of her teaching jobs were steps toward her conversion. Raised Episcopalian, Jan and her husband Kerry attended an Episcopalian church every Sunday. But immersed in the teaching and practice of the Catholic Church at work, her first big prompt from the Lord came at a student retreat where the Lord stirred a desire in Jan’s heart to receive the Eucharist.

“Several years into teaching at Lansing Catholic, I went on the Kairos retreat for the first time. I was on the retreat as a participant and it was totally cool because I knew Jesus loved me. The last night of the retreat we went to Mass and it was absolutely incredible. When the time for Communion came, I didn’t go up for a blessing because I had a chip on my shoulder about not being able to receive the Eucharist. Later, I went back to the chapel alone and told Jesus, ‘You brought me to this retreat and told me you loved me and then when I wanted to get closest to you I couldn’t receive you because I’m not Catholic.’” In an attempt to distract herself from her anger with God and the Church, Jan broke retreat rules and checked her phone. “I had a text from a friend that said, ‘Jesus loves you, but I’m his favorite.’ It seems silly now, but God took a weight off of me in that funny moment – I felt like Jesus was saying ‘chill out.’

“I stayed angry about not being able to receive Communion for a long time, but I tried to ignore my feelings. A couple years after the retreat, I was alone in my car and praying when I heard the words, “Well, maybe you’re Catholic.” I dismissed that message. But I was driving home after a teacher in-service a while later and heard the same exact words. That time I responded and asked, “What do you want me to do about it?” The immediate answer was, “Talk to Tom Maloney [president of Lansing Catholic High School].” It was such a shock to me to hear that I should talk to my boss that I turned my car around and went back to school. I was confident that Tom wouldn’t be available, so I was going to show God I was willing to listen, but that he was wrong. Went I got back to school, Tom was right in his office, available. I told him the story through my tears. I was a cradle Episcopalian brought up in this faith I knew a lot about and I was supposed to be on board with stuff like Mary that I didn’t even understand. Tom told me I had to trust and he reminded me that the Church is human. He asked if I had talked to Kerry or my Episcopalian priest. I said, ‘No, Jesus told me to talk to you!’

“I went home and talked to Kerry, which was all very emotional and teary. Kerry was immediately supportive, and my priest at the time told me to look into it and keep praying about it because it was clear that the Holy Spirit was at work.

“For a year, I was at the Episcopal church for service and teaching Sunday school, and at the Catholic Church for Mass – I did both. I read a lot of books and kept praying.

“But the Lord kept working on me. On Aug. 29, 2012, I was confirmed in the Catholic Church. I was so nervous I felt sick. I stood in a beautiful church and recited the Nicene Creed. I actually cried my way through it. When the chrism oil was rubbed on my forehead, a blanket of warmth came over me. I can’t explain it but it was amazing. And I finally had first holy Communion in the Catholic Church.

“Less than a month later my son Logan came to me and told me he’d been talking to the priest and wanted to be Catholic, and the following Easter he came into the Church. The minute that Easter Vigil was done, my son Kyle asked me if he could become Catholic. My daughter Annie was still young, so she went through sacramental prep as a second-grader. And Kerry goes to Mass every week with us.

“As crazy as it all was, my story and my faith are really about the Eucharist. Mass is beautiful and the reverence surrounding the Eucharist speaks to the person, Jesus, who is truly present there. Along with being a wife and mom, my journey to the Catholic Church is one of the coolest things I’ve ever been through.”

Do you have questions about becoming Catholic, or do you know someone who does? Contact your local parish to learn about the RCIA (Rite of Christian Initiation of Adults) program.