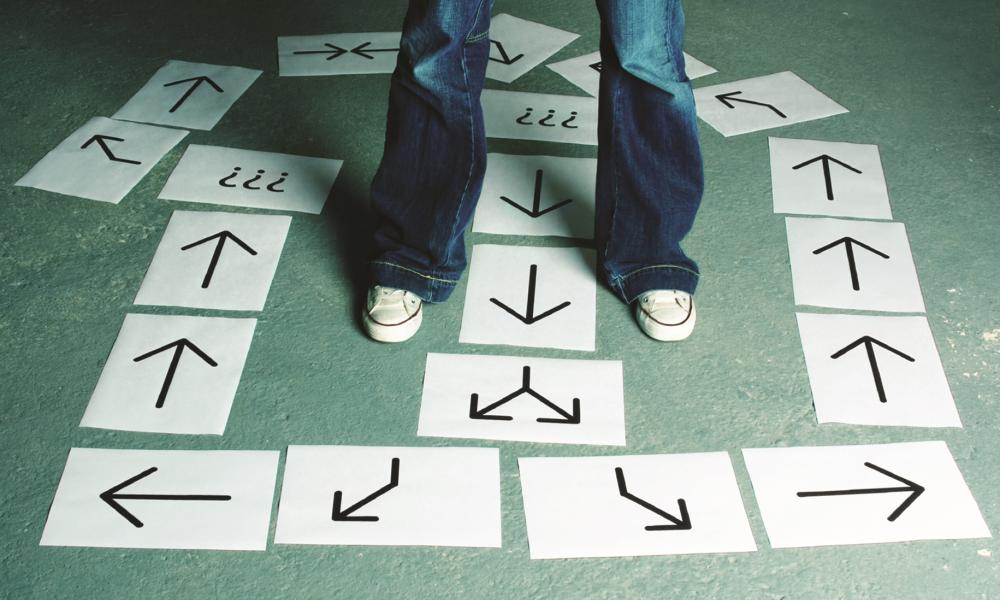 What am I going to do with my life?

Most of us have probably asked, “What am I going to do with my life today?” God gives each of us a beautiful gift in being able to offer ourselves as a sincere gift back to God and to others. But often, we struggle with the specifics. How exactly am I to give of myself to others and God?

I have struggled with the question more than once. When I was in college, I first thought I was going to be a professor and was working full steam on a Ph.D. in biochemistry. At the same time, I met a wonderful young lady and marriage came to mind. She helped me bring God into the discussion and then things got very interesting. Before this point, I may have asked, “What am I going to do with my life?” but it was without God as a reference point. I was not thinking about the big picture and definitely did not even consider asking God for some input on the matter! I had drifted from my Catholic faith, which is a problem if you want to make a good decision that will affect your entire life. How is one going to be able to make a good decision about life if we do not know the author of life? I was soon to find this out, and also to find that God has a mysterious way of moving us exactly where we need to be so he can get through to us. Jesus said that the Holy Spirit, like the wind, blows where it wills.

I recently had moved to Michigan to continue my graduate studies. I did not know anyone, but in a short time, many good people of Christian faith were right in front of me! Christian missionaries who visited the dorms asked me to study the Bible with them; a local director of religious education befriended me; a group of Catholics invited me to their family prayer group meetings; and I was encouraged and drawn to attend Mass at the student parish. While the vocation question was still in my mind, it was as if God were moving me into a better place where I could actually hear him!

At this time, I never really talked much to anyone about the possibility of a priestly vocation. I was too chicken. In fact, when I would see priests, I would tend to run the other way. But the more I prayed, the more I felt an inner prompting to consider the priesthood. I kept praying, “Show me the way Lord. Show me the way to love and to give my life to you.” And God answered that prayer in incredible ways.

One Sunday, I was in the parking lot of the church after Mass and heard the yells of the parish’s retired pastor. Father Mac was suffering from Alzheimer’s and was not able to celebrate Mass unless he had some help. At first, I hoped he was calling for someone else, but he kept saying, “Young man…young man… come here …come here!” I looked around and there was no other young man in the area – I could not avoid this one!

Father Mac blurted out, “Young man, have you ever considered being a priest?” It was like my worst nightmare and best dream were happening right before my eyes. I said, “As a matter of fact, Father Mac, I have been thinking about the priesthood for a long time.” Dear God, I had said it out loud!

Father Mac said with a smile, “Well, young man, come and see me. We will talk more about that!” But I kept putting off calling Father Mac. I was very busy in the lab and I didn’t think he would even remember the conversation.

A few weeks later, on my birthday, I went to daily Mass concelebrated by Father Mac and another priest. I sat near the last pew. It was an amazing Mass. The concelebrating priest was a missionary who spoke about vocations to the priesthood. I felt like the disciples on the road to Emmaus whose hearts burned within them.

Then, an incredible thing happened after Communion. Father Mac got up and began to ask everyone to pray for a young man he had met the other day who was a biochemist. He asked us to pray for that young man to become a priest. I was slowly trying to sink underneath the pew to hide. Too late! He spotted me. He pointed in my direction as said, “And there he is… stand up young man, stand up!” There was no escape. I felt like I was set up. Alzheimer’s? How did he remember so much?

I was numb with joy. After Mass, Father Mac asked, “I didn’t push you into anything, did I?” I told him, “No Father. Sometimes donkeys need a good kick in the rear end to get going!” When everyone had left, I knelt down and prayed deeply in thanksgiving. A few months later, I entered the seminary, and Father Mac went home to be with Jesus.

God called me to the priesthood, but he calls others to marriage or to live a consecrated single life or to become a religious sister or brother. All these calls are similar in that, in every case, God asks the person to give up his or her life in love as Jesus did. The important thing is to say “yes” to God and offer oneself as a sincere gift to God and others. That is love.

4 steps to figure out your life a walk with St. Peter

In this exercise, we are going to walk with St. Peter and consider how Jesus helped Peter know how to respond to the question, “What am I going to do with my life?” To begin, prayerfully read John, Chapter 21 a few times. As you read it, ask yourself how Peter might have felt at different times during the reading.

1 Before meeting Jesus: How did he feel being out fishing all night without a catch? What would such a night remind him of? (See Luke 5:1-10) What was Peter comfortable doing when he met Jesus? Read Luke 5:10, or Mt 16:18-19. What in my life am I comfortable doing and what has the Lord asked of me that takes me out of my comfort zone?

2 When he realized Jesus was there: What are some of the things that Jesus did that helped engage and heal memories within Peter? (The catch of fish, the nets that almost were torn, the charcoal fire, asking for a couple of fish, the three questions). How has the Lord healed memories in your life that were painful?

4 The call: “Feed my lambs … tend my sheep … feed my sheep.” Three times Peter denied Jesus. Three times, Jesus allowed Peter to affirm the truth of his love for Jesus. Three times Jesus made his choice of Peter clear and his mission clear: “Feed my sheep.” End this exercise by considering the specific ways God has called you to tend the lambs and feed the sheep in your life. Who are God’s lambs that you have been entrusted with? What do they need and how can you offer care to them?