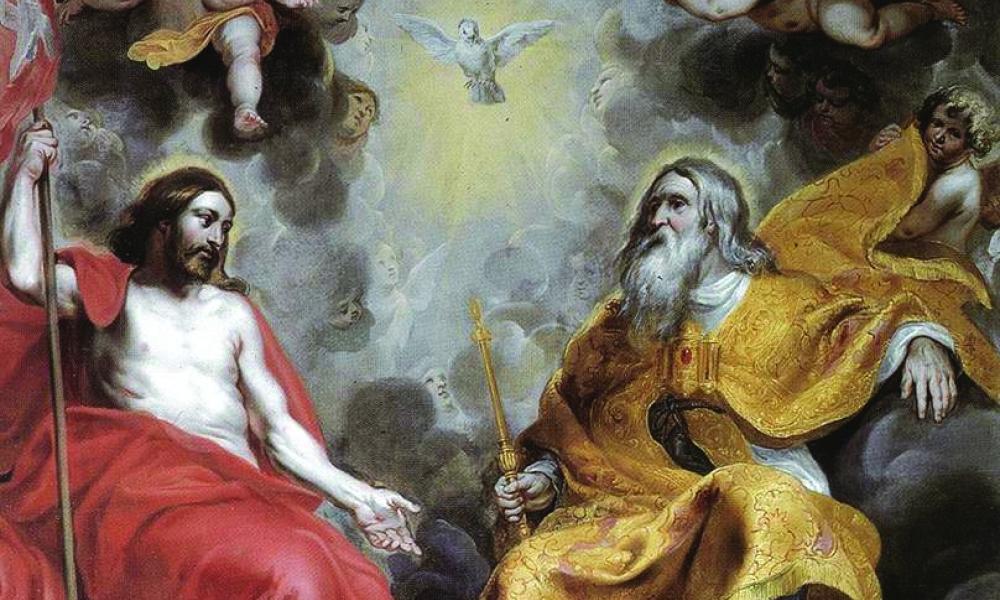 We believe in the Holy Trinity What does that mean?

Our being made for communion with God makes perfect sense since God has revealed himself to be communion – a Trinitarian communion: Father, Son and Holy Spirit. This mystery of the one God, three persons is “the central mystery of Christian faith and life.” As a mystery of faith, however, the Trinity is inaccessible to reason alone. What we can know of this mystery is entirely dependent on God revealing who he is to us.

Throughout the divine revelation of the Old Testament, God is revealed to be one. The Shema, a central prayer of the Jewish faith, captures this fundamental truth, “Hear, O Israel: The Lord our God is one Lord.” (Dt 6:4) Additionally, God revealed to Israel that he is truth and love, as “abounding in steadfast love and faithfulness.” God even revealed his name to Israel.

“A name expresses a person’s essence and identity and the meaning of this person’s life. God has a name; he is not an anonymous force.” This is critical because the disclosing of his name makes it possible for us to know him more intimately. God is YHWH (I AM WHO I AM). This mysterious name “expresses God as …infinitely above everything that we can understand or say…and he is the God who makes himself close to men.”

At the same time, in the last installment, we learned the culmination of God’s revelation to humanity occurs in Jesus. “Christ, the Son of God made man, is the Father’s one, perfect and unsurpassable Word. In him, he has said everything.” This revelation of the extent of God’s love for us and his will for us to enter into communion with him has reached its finality with the Word made flesh.

The heart of communion

In the desert, he refused to turn the stones into bread, choosing instead to live by the word of God. After Peter urged him to turn away from Jerusalem so as to avoid persecution, Jesus rebuked Peter for thinking as a human rather than like God. In Gethsemane, Jesus surrendered his will to the Father’s will. Even on the cross, he responded to challenges and taunting by commending his spirit into the Father’s hands.

In other words, he emptied himself in obedience to the Father’s will so that all might be saved (healed, whole, one, in communion). He also faithfully taught only what he heard from the Father. (see Jn 8:26 and Jn 8:28 for examples) In this way, he not only taught us perfectly and fully about the mind, love, heart, and thought of God (i.e. who God is) but he showed us the extent to which God loves, cares and thinks about us.

Through him, God is revealed to be a Trinitarian communion. The Catechism explains that “Jesus revealed that God is Father in an unheard of sense: he is Father not only in being Creator; he is eternally Father by his relationship to his only Son who, reciprocally, is Son only in relation to his Father.” Further, Jesus reveals that God is Spirit when he promises to send the Holy Spirit to be with the Apostles and the Church “to teach them and guide them ‘into all truth.’”

The dogma of the Holy Trinity

In closing, the Church teaches the following about this “central mystery” of our faith and life: