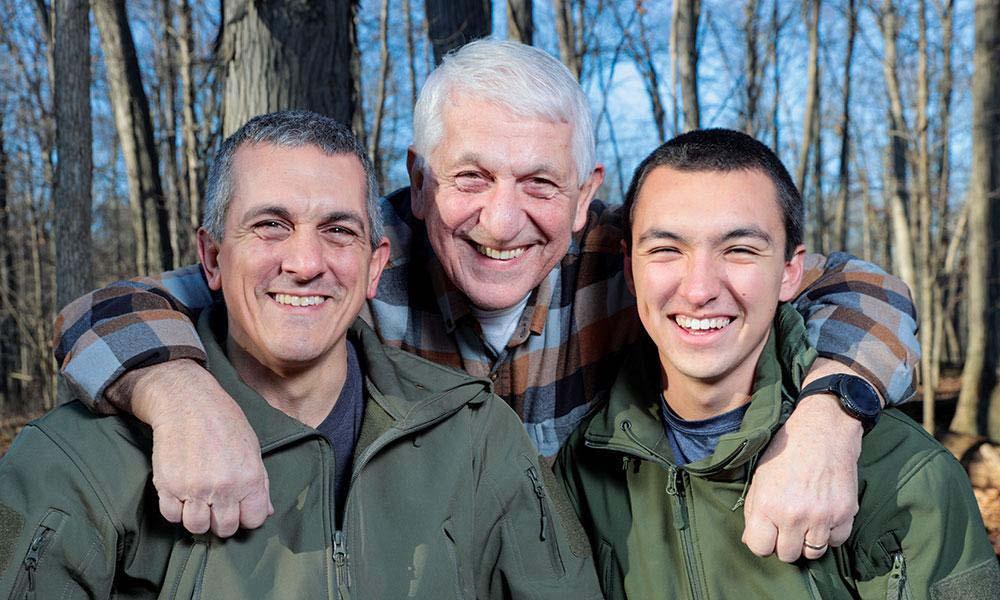 In the midst of raising a family of seven kids, Jeff Randolph of Christ the King in Ann Arbor realizes the central role that fatherhood plays in his life on every level. With athletic focus and tenacity, Jeff approaches his role as a father with a champion’s sense of determination. He shares a few notes from his playbook to talk about best practices, what he’s learned from his father and why he loves it.

“I hesitate to present myself as having it all together as a dad” he says. “My oldest is about to graduate from college, and I still have much to learn.

“I love fatherhood. I love being a dad. When I’m not working, I throw myself wholeheartedly into family life. First and foremost is my role as a husband, because, next to God, my relationship with Amy is the most important thing to me; I always remember Bishop emeritus Carl Mengeling saying many times that the best thing you can do for your children is to love your wife, and I know that loving my wife gives security to my kids.

“I love to spend time with my kids. I’ve learned a lot about that, too. One of the things I try to remember is another way to spell love is T-I-M-E. I have a pretty demanding schedule, but I find that I’ve got to have my calendar reflect my priorities. We sometimes have the fallacy that we can schedule quality time, and sometimes that works and that’s great, but usually quality time happens in the midst of quantity time doing normal, everyday stuff.”

Jeff doesn’t pretend that fatherhood is easy, but doesn’t consider it a chore, even though chores come with the job.

“One thing I was thinking about recently is that dads do hard things. You know, all those things that nobody wants to do? It may be something as silly as going into a dark, damp basement, or cleaning up a dead animal under the deck, or that nasty stuff that no one wants to do, because that’s what dads do. I saw my Dad do that and realized that’s my role.

“I’ve been stretched beyond measure as a dad. I tell people often, especially young dads, ‘It’s harder than you’ll ever imagine, but it’s also more rewarding then you ever dreamed.’ It stretches you. It causes you to die to yourself and to do things you wouldn’t otherwise do. It causes you to put other people’s needs before your own on a daily basis. So there’s certainly the sacrifice, but in terms of the reward, not that you count the cost, but seeing your children grow in virtue and overcome obstacles is hugely rewarding.”

Jeff has learned the power of affirmation, both as a father and a coach. On the field and off, the focus is personal development.

“As a coach, he focused so much on the positive,” Jeff’s son Peter says. “In a lot of ways, he strove to build us up and not tear us down. He was very intense in his coaching and he would really get into it, but he wouldn’t be consumed by the losses. For him, it’s never all about the game; it’s more about the players. He really cares for them and wants to see them grow as people.”

“I love coaching,” says Jeff. “When there’s a kid who strikes out all year long and gets the one single, I’m happier for him than the kid who hits a home run. I also lift weights with my sons, and I think about how you can always go further with a lifting or running partner. I’ve been blessed with great coaches, including my dad, and when they say, ‘I believe in you, you can do one more,’ you do things that you never thought possible.

“In a unique way, I think fathers have an ability to encourage and believe in their children that gives them a level of confidence like no one else. If you believe in them when sometimes they may not believe in themselves, that can give them the confidence to go places they couldn’t on their own.”

Jeff has a lot of gratitude for his family legacy and the example his father set for him.

“It’s great seeing my own kids grow up into adults,” said Jeff’s dad, Deacon Larry Randolph. “My wife and I talk a lot about how they are raising their kids, and it’s a blessing. In a lot of ways, we even see how they’ve corrected our mistakes. And we see them trying to be really good parents. We see their commitment to being good parents, and it’s great to see how much they care about their kids.”

In speaking of what he learned from his father, Jeff says: “Put God first, family second – and everything else after that. His faith and his relationship with God guided everything else. We always knew he loved mom and we were loved. Randolph means Strong Shield, and I always thought my dad has been that for me. And I think that fathers as a whole are called to be a shield between the outside world and the family. To me, it’s really cool that our last name means that, and I experienced that with my own dad. That no matter how tough things were on the outside ... myself, my siblings and my mom felt protected because Dad was there. Looking back, it's an immeasurable gift to me,” he says.