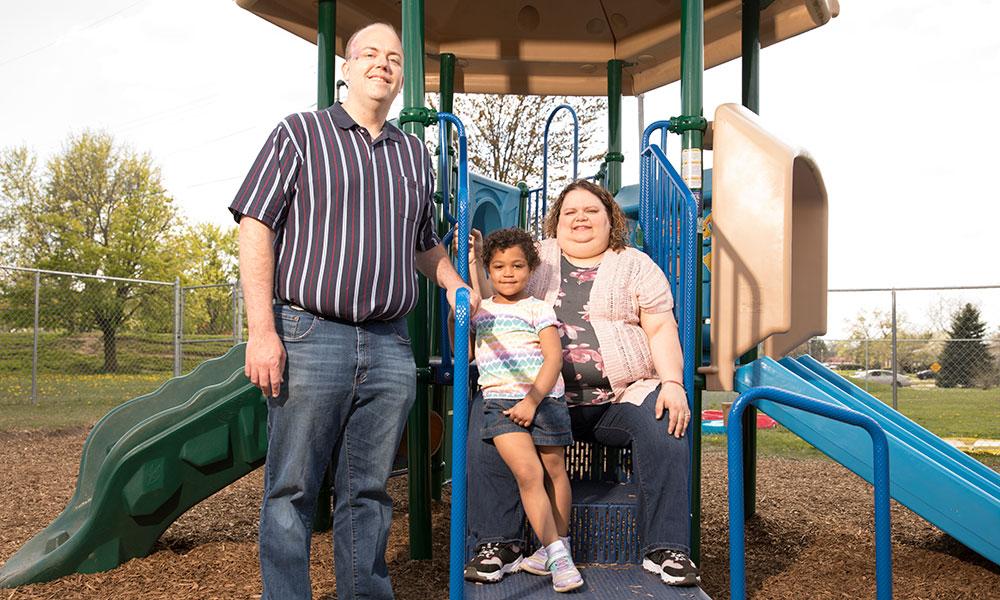 She is our Dream Come True

This love story begins seven years ago in a dream. Newlyweds Darci and Rich Herl had been talking about welcoming children, but couldn’t agree on names. One spring night, Darci awoke to her groom talking in his sleep.

“No,” he adamantly told the unseen person. “I don’t like that name.” He continued muttering. “No, not that one either . . . Hmmm, Anna Grace.” He paused and exclaimed, “I like that!” Over dinner, Darci shared the story with Rich and they laughed about the incident, filing it away as a funny memory in their hearts.

Over the next year, the newlyweds continued to build their life together. Rich was hired as news director for MacDonald Broadcasting in Lansing. Darci became a quality analyst at Auto-Owners Insurance. They developed wonderful friendships through church and bought a house. Married life was developing as they had planned, with one exception.

Darci explains, “After over a year of being married, kids still had not come. After consulting with a couple of doctors, we found that having a baby the ‘natural way’ was virtually impossible for me.” Darci smiles and continues, “I always had a desire to foster or adopt children, so it was a quick jump for me.”

Rich agrees, “It didn’t make sense to try expensive medical procedures, so we decided to foster children with the hope of adopting one day. We contacted St. Vincent Catholic Charities about becoming foster parents, then attended an orientation session in December of 2013. With the help of our licensing specialist, a year later, we were fully licensed foster parents.

“Over the first year, we received calls for short-term placements. Our first was a weekend of respite for another foster family who had three young boys. Man! Was that a weekend of learning for us – going from none to three in an instant. It was a great three days, but we were very ready when their foster family picked them up!”

Rich nods. “When we get a call [from St. Vincent’s], it’s like: ‘Here’s what we know’ [which isn’t usually very much]. ‘Do you want to take the child?’ If the foster parents are unable to, the agency moves to the next family on the list, or the next agency gets a chance.”

“In December of 2015, the St. Vincent licensing supervisor called me. She explained there was a 6-month-old baby girl that Children’s Protective Services (CPS) would be removing from a bad situation. However, they were unsure of where or when they might find the mother and child. St. Vincent’s was looking to have a family that was ready and waiting – were we in? We said yes, of course, then we waited to hear back.” Darci recalls.

“We waited through the night and went to work the next morning. After hours of no communication, the caseworker called to tell us the mother had taken her to a nearby county. She was being cared for through another agency. I was so angry! I was angry at the system, I was angry at life, but I was mostly angry at God.”

Rich says, “Two weeks later was Christmas Day, and Darci didn’t want to get out of bed.”

Darci quietly adds, “I said some very mean things to Rich, and had a very frank talk with God that Christmas Day. How could God let me go through yet another holiday without a child? Taking this baby from us was too cruel.

“We got through Christmas and went back to our regular routine. Four short days later, on Dec. 29, I was getting ready to go out for lunch when my work phone rang. It was St. Vincent’s again, this time they had a newborn girl whose mother had left her at the hospital. There was no father listed on her birth certificate so it was likely this would be a longer-term placement. Our caseworker said the mom had children in another state, and that state was close to terminating her parental rights for them. The caseworker asked, ‘So, are you willing to take this child?’

“I immediately dialed Rich’s cell but my calls kept dropping, so I switched to his office line and got the receptionist. ‘Rich. Rich. I need to talk to Rich!’ I gasped. When he asked who was calling, I could only say, ‘Wife. Rich’s wife.’” Darci laughs. “Thankfully, Rich agreed, so I called the caseworker back and gave her our emphatic yes. She said CPS would phone us after the 1 p.m. court hearing.

“I was so excited I couldn’t focus on work. I asked my boss if I could just go home. She told me, ‘Go have a baby!’” Darci laughs.

“I texted my friend group from church to tell them our news and ask for prayers. One of those friends, who was a nurse at the hospital, texted back, ‘I probably shouldn’t say this, but I just kissed her.’ She had switched shifts with a co-worker and happened to be in the nursery that day! I have faith that all of the nurses are loving and capable, but it was wonderful knowing ‘our child’ was with a friend. Especially since we were waiting so long for the call to pick her up.”

Rich jumps in: “Darci had called me at work, and said she’d call back, but it was taking forever. We didn’t know that the court postponed the hearing because the mom wasn’t showing up, so we waited . . .  and waited.

“We found out later that the St. Vincent’s staff had really gone to bat for us. Another agency had responded to the placement search email before they were supposed to, and initially the Michigan Department of Health and Human Services started the process for that agency and foster family. The St. Vincent’s worker argued that it was still in the timeframe for their agency to find placement. She also pointed out they had already taken one placement away from us that month – they couldn’t take a second!

“Finally, we got the call! They told us to pick her up at McLaren Hospital, so we jumped into the car. We walked proudly to the information desk with our car seat, and the staff person shook her head. We had gone to the wrong McLaren campus. So we got back in the car and drove to the correct one!”

Darci shakes her head smiling: “A few days later, I brought our baby to my work. As I walked around showing off my new bundle of joy, I pulled out a blanket St. Vincent’s had provided when we picked her up. My friend’s eyes grew wide. She looked at the blanket and then back at me. ‘I made that blanket,’ she said. ‘And I prayed over it that it would hold your baby.” Darci smiles, “That was when I told God, ‘OK! I got the message.”

“There’s one thing more you need to know,” Rich adds. “When we arrived at the right hospital, we had told our nurse friend about the Anna Grace dream from years ago. As she was going through the discharge paperwork, her mouth dropped open. The birth mother had named her baby – our baby so many had prayed for – Arianna, and had given her the middle name Grace. We held Anna Grace in our arms and knew we were meant to be a family.

“It has been a long road for us, but St. Vincent’s has been with us every step of the way, from being there during the licensing process, supporting us through the legal maze, to having half the office show up on adoption day three years after Anna Grace’s placement! We’ve developed close relationships with the St. Vincent’s team, and we’re not afraid to call them if we have questions, or even if we just need to vent. Everyone there has been amazing.

“We love that God has given us this opportunity to expand our family through foster care, and adoption. Whether children stay with us for an hour or will be visiting us in the nursing home, every child who walks through our doors becomes one of our kids.”

Foster parenting gives children the opportunity to develop to their full potential in a safe, caring environment. The preference for foster care is always to reunite children with their biological family, if they are able to provide a safe and loving home. Second best is having extended family who can provide stability while keeping the children connected with their biological history and personal family stories. The final preference is a safe foster home.

When a child enters the foster care system, the Department of Health and Human Services (DHHS) tries to place him or her with extended family, whenever possible. If they can’t do so quickly, they will decide whether to place that child in a DHHS foster home or reach out to private agencies, such as St. Vincent Catholic Charities, in the county where the child is located. Generally, the agency has four hours or less to place the child.

If you are interested in more information on adoption or on becoming a foster parent, contact your local Catholic Charities agency.