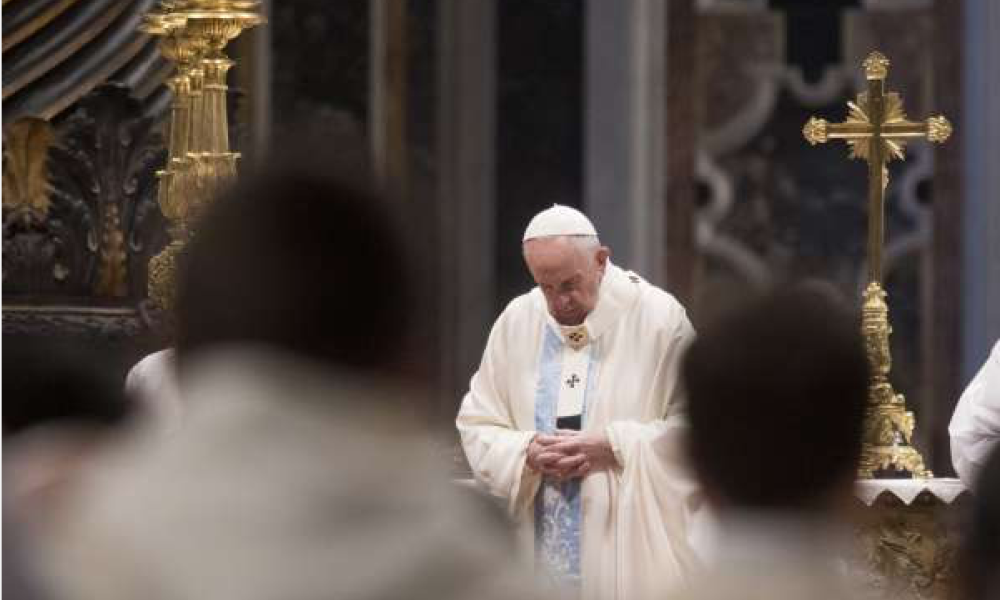 Pope, USCCB call for dialogue in the Middle East

Pope Francis led pilgrims in a moment of silent prayer “that the Lord may give us the grace” of peace following the praying of the Angelus on Jan. 5 in St. Peter’s Square. His prayer for peace came just two days after a U.S. drone attack killed Iranian Major General Qassem Soleimani and six others on Jan. 3, and a warning of “harsh retaliation” from Iran’s supreme leader, Ayatollah Ali Hosseini Khamenei.

“War only brings death and destruction. I call on all parties to keep alive the flame of dialogue and self-control and avoid the shadow of enmity," the pope stated prior to the moment of silence.

“The U.S. bishops’ conference has spoken out regularly to encourage the pursuit of peace in the Middle East. We urge once again that all parties, in these critical days, embrace peace rather than violence. Peace has been all too elusive – in recent memory alone, war has caused hundreds of thousands of lives to be lost, as well as untold suffering and endemic instability. We have particularly witnessed and addressed growing acts of violence in recent weeks, most recently with the attack on the United States Embassy in Iraq, the killing of Iranian General Qassem Soleimani last Friday, and the missile attacks on Iraqi bases yesterday. We have called for necessary diplomacy, courageous dialogue, and tireless efforts toward peace to resolve such global conflicts. We do so now, and we will do so always.

Archbishop Leo Boccardi, apostolic nuncio to Iran, told the Italian news agency ANSA on Jan. 3: "I think tensions have reached a level never seen before, and this is worrying and further complicates the situation in the region."

In comments to the Vatican News on Jan. 3 the archbishop went on to say, "The appeal is to lower tension, to call everyone to negotiation and to believe in dialogue knowing that, as history has always shown us, war and weapons aren't the solution to the problems afflicting the world today."

Cardinal Louis Sako, patriarch of the Chaldean Catholic Church, invited Christians and Muslims to pray for the decision-makers at the Epiphany Mass celebrated at St. Joseph Cathedral in Baghdad on Jan. 6. "Wisdom is required to avoid the 'volcanic eruption' we are about to face." The cardinal called on world leaders to avoid further escalation because "innocent people will be the fuel for such fire."

"In the face of this sensitive and dangerous situation, we call on all the parties concerned to exercise restraint, show wisdom and act rationally, and (to) sit at the table of dialogue and understanding to spare the country the unimaginable consequences … We raise our prayers to God Almighty in order for life to return to its normal course, and (for) Iraq and its people (to) enjoy peace, security and goodness."

Timeline of Recent Escalation of Tension between the U.S. and Iran

The killing of Iranian Major General Qassem Soleimani on Jan. 3 followed several recent incidents between the U.S. and Iranian-backed forces.

Dec. 29: In retaliation, the U.S. bombed five sites of Kataib Hezbollah in Iraq and Syria, killing 25 fighters and wounding 55 others.

Now, Lord, come to our aid! Grant us peace, teach us peace; guide our steps in the way of peace. Open our eyes and our hearts and give us the courage to say: "Never again war!" . . . Instill in our hearts the courage to take concrete steps to achieve peace.

Keep alive within us the flame of hope, so that with patience and perseverance we may opt for dialogue and reconciliation. In this way may peace triumph at last, and may the words "division", "hatred" and "war" be banished from the heart of every man and woman. . . . Renew our hearts and minds, so that the word which always brings us together will be "brother", and our way of life will always be that of: Shalom, Peace, Salaam!