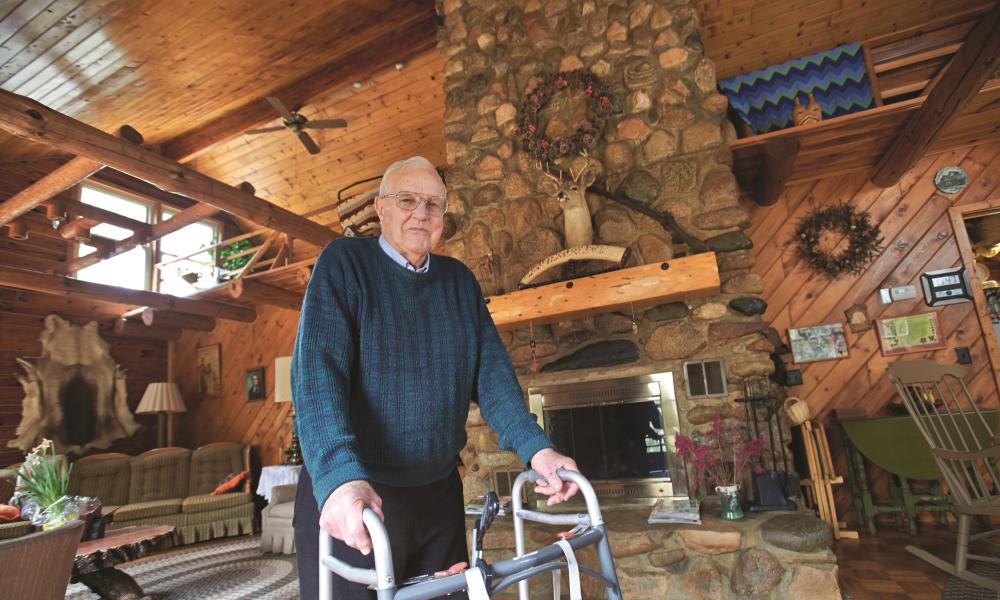 Msgr. Vincent Howard - Still committed to ‘the most important work of my life'

Things have changed a lot since I was ordained,” says Msgr. Vincent Howard, 96, the oldest priest in the Diocese of Lansing. “But the one thing I want people to know – especially young men who might be thinking about the priesthood – is that through all those years, I really enjoyed it. I had fun. There was never a day that I regretted being a priest.”

Born in Ann Arbor on June 7, 1918, the fifth of nine children of Louis and Ava Howard, Father Howard (the title he prefers) recalls a happy childhood, despite losing his father at an early age. “I was right smack in the middle,” he says, “and I thought that was the best place to be because there were things the older children could do that the younger ones couldn’t do; and things the young ones could do that the older ones were not allowed. Being in the middle, I could go either way, younger or older.”

Even as a young student at St. Thomas the Apostle School, Vincent thought about becoming a priest. Ordained in 1947 in the Archdiocese of Detroit, Father Howard recalls his first placement as assistant pastor at the former St. Brigid’s on the city’s west side. In addition to daily Mass and weekly confessions, young priests were responsible for bringing converts into the faith with individual instruction. “For me, that was a delightful assignment because I was able to work with the youth of the parish. It was a lot of work, but I loved it,” he says.

Next were assignments at St. Theresa in Detroit, where Father Howard was involved with the Legion of Mary at both the parish and diocesan levels, and the Young Christian Workers, followed by St. Aloysius in the heart of downtown. It was there that Father Howard inadvertently found the role that would become his most enduring legacy.

“At the time, the rectory of St. Aloysius was on the eighth floor of the Chancery building. Bishop John Anthony Donovan and seven other priests lived in the rectory, as well. One evening over dinner, I mentioned to Bishop Donovan that we should take a lesson from the religious orders in having a vocations director for the Archdiocese of Detroit,” says Father Howard.

“A few months later, Cardinal Mooney called me into his office and appointed me as the archdiocese’s first vocations director. He wanted me to live in the seminary and teach a class each day. The rest of the time I would go to the parishes and schools of the archdiocese to encourage young people to decide on a vocation to the priesthood and the religious life.”

In the years following, there was a marked increase in students applying to Sacred Heart Seminary and to some of the religious orders. The role of vocations director became a standard post in dioceses across the nation, and Father Howard was a founding member and early leader of the National Conference of Diocesan Vocation Directors.

During his years on the seminary faculty, Father Howard and other priests also became involved in the civil rights movement. “We did some amazing things,” he remembers. “We walked in the famous march from Selma to Montgomery, Alabama, with Dr. Martin Luther King. A year later, we also participated in the March on Washington, and we were present when Dr. King gave his famous ‘I have a dream’ speech. It was an exciting time.”

Because of his interest in the civil rights movement, Father Howard was later assigned to St. Catherine’s, an inner-city parish. “I was pastor there during the 1967 riots,” he says. “Talk about excitement. Shortly after, three of us who were inner-city pastors were assigned additional parishes along with those we already were serving. I think we were the first priests in the Detroit Archdiocese who pastored two parishes at the same time.”

Eventually, Father Howard was sent to St. Thomas the Apostle in Ann Arbor, his home parish, then part of the Diocese of Lansing, and, finally, was pastor at St. Elizabeth in Tecumseh until his retirement in 1988.

A few years before he retired, Father Howard began work on a log home on three acres in Chelsea, which he built almost entirely by himself, and where he still lives on his own. Even after more than 25 years of retirement, Father Howard remains committed to the priesthood.

“I have an altar up in my loft where I say Mass nearly every day,” Father Howard says. “Most days, I offer Mass for the priesthood and the priests of the Diocese of Lansing. The Church needs priests who are holy and lead people to Christ, so I pray for the holiness of the priests in our diocese.”

“I consider this as the most important work of my life.”