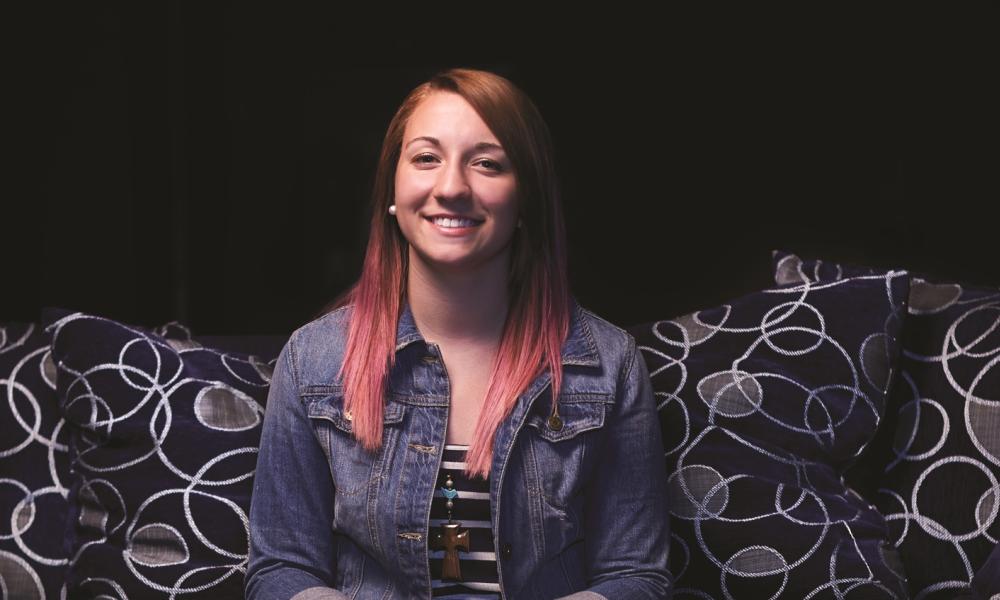 Looking out at the sky and thanking God, Bayley keeps her faith life fresh

When it comes to growing in faith life, Powers Catholic High School senior and Holy Redeemer, Flint, parishioner Bayley Bauchan knows the importance of looking to the unknown. As a Steubenville veteran, new leadership camp attendee, and one who is pursuing a Catholic career, Bayley is constantly on the lookout for the next opportunity to grow in her faith life. The Steubenville conference has been instrumental in her growth, and while she has attended more than once she says that each year holds unique value.

“Everybody just becomes closer with Jesus, but then you also are inspired because there’s 2,000 other teenagers that are figuring out the same thing you are,” says Bayley.

This year, Bayley’s strong background enabled her to attend the Steubenville leadership camp, a week-long gathering focused on spiritual growth and to prepare these new leaders for sharing their stories with the entire Steubenville audience. Bayley says that with these clear-cut God-driven goals in mind, she was surprised to witness something else.

“I really expected everyone to be super on fire for God when I got there,” says Bayley. “In small groups, I remember people talking about, ‘Yeah, I’m not even totally sure if I believe everything anymore,’ so it was really interesting because people weren’t totally as involved as I thought they would be.”

But Steubenville leadership isn’t just for the committed. It’s a place that welcomes questioning, explores doubt and ultimately transforms these questions into the strongest of building blocks.

“Every night, we would have adoration or we’d have praise and worship, but our praise and worship – it wasn’t praise and worship that I am normally used to. It was just very intense,” Bayley says. “I think by the end, people were just so overwhelmed, but in a good way, so they just came to accept it. I think it was also part of hearing everyone else’s story, really helping them come along the way. Some of the [Steubenville] witnesses were about the [leadership camp] week and how the week has changed them.”

She added that new and deeper faith-based experiences are important for keeping your faith life in perspective: “Throughout the week, I was realizing I wasn’t where I wanted to be with my faith life … It made me really eager to know more.”

Bayley also wanted to bring her experience home with her. She says, “Since we’ve made all these new friends, we’ve just really wanted to be connected with them, and so the idea of being connected in the Eucharist really started to be implemented in us, so my friend and I started going to daily Mass, and I would definitely say that affected me a lot.”

Bayley says continuing to try new things will be key for her continued growth in her own personal faith life, and in achieving her goal of becoming a youth minister.

“Yeah, knowledge is nice, but if I couldn’t relate it or just have this experience of certain things under my belt, then I would just kind of spew facts at people, and it wouldn’t do anything for them,” Bayley reasons. “But if I have had experiences or have gone on retreats and things like that, I would say that that’s a lot more beneficial.

“My youth minister is really open about doing goofy things so everyone’s involved, so I think that’s something that would be really important … I kind of want to be what my youth minister has been for me.”

Bayley has found that focusing on finding God in unexpected places has helped keep her fresh, focused, and motivated.

“Especially in my prayer life, I like not [to have] routines because I give up on them and then I forget about them. So I like just looking out at the sky and thanking God … just things like that and start the conversation that way.”

Going deeper and being adventurous in developing your faith life can be intimidating, challenging and overwhelming at times. Bayley believes that along with trying new things, a support system is key for teens looking to level up.

“I think something teenagers struggle with a lot is just feeling like they’re alone in that,” Bayley says. “I think people just need to learn that they aren’t alone and everything is not as complex as it seems. It’s just love. People need to realize that that’s the core of it. It’s just a love relationship.”

For more information on attending a Steubenville summer youth conference, visit www.steubenvilleconferences.com. Last summer approximately 25,000 teens attended a conference there. See page X for a complete listing of summer opportunities recommended by the Office of Youth Ministry for the Diocese of Lansing.