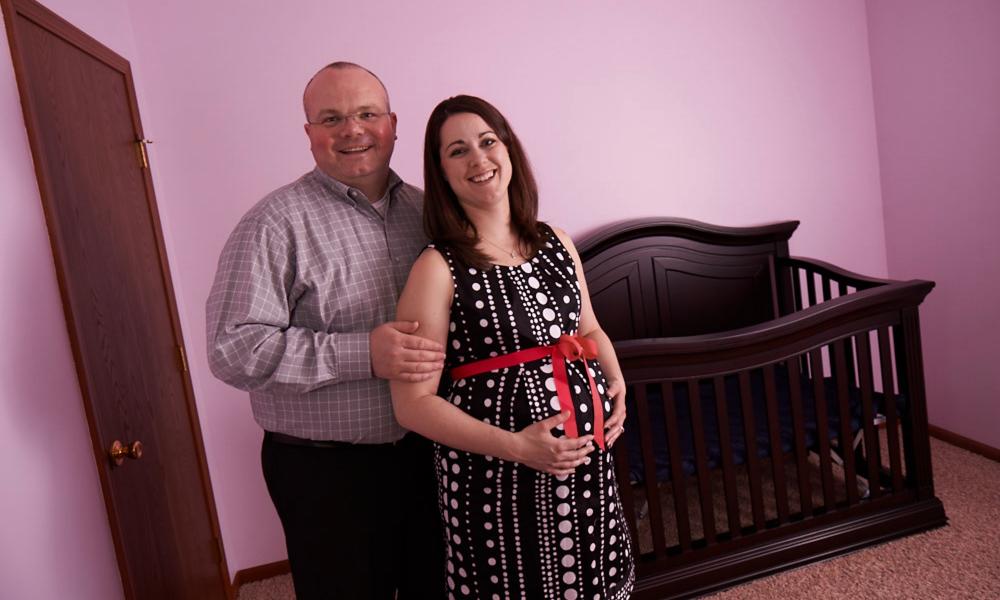 When Kim and Dave Hunt faced the struggle of infertility, they sought out the advice and counsel of an unlikely expert: Father Dwight Ezop.

“We had been through so much at that point. The fertility center was talking about IVF (in vitro fertilization), but before we got into any of that, we decided to talk to Father Dwight,” Kim says. “I just remember what an emotional meeting that was and how wonderful he was.”

It was the early spring of 2013. Kim’s father had passed away several months before, and Father Dwight, who had married the couple three years earlier, was aware of the challenging time the couple had gone through. He also understood their desire to seek a natural solution to their infertility issues, which had nearly consumed the first three years of their marriage.

The Hunts’ medical odyssey began several months after their June 2010 wedding. “We knew we wanted to start a family right away,” says Kim, 33. “We tried, but nothing was happening. Less than a year into trying, I was put on the fertility drug Clomid. My blood work showed I was ovulating, and other tests showed there was nothing wrong, but I still wasn’t able to conceive.”

“The most frustrating thing was that all along, they couldn’t find anything wrong,” says Dave, 37. “All the tests showed that Kim was fine; I was fine, so there wasn’t any reason they could point to as to why Kim wasn’t able to get pregnant.”

Kim’s doctor referred the couple to a fertility clinic in Grand Rapids, where the tests they already had endured were repeated, with the same inconclusive results. “They were talking about IVF, but we were not ready to get into all of that,” Dave says.

The months of trying to have a child became years filled with disappointment and confusion. Like most couples who suffer from infertility, Kim and Dave faced the well-meaning but difficult questions from friends and relatives. “When you’ve been married a couple of years, everyone wants to know when you’re going to have a baby, when are you going to start a family,” Kim says. “It’s so hard because you’re practically crying on the inside.”

“I reminded her that people didn’t mean to be insensitive,” Dave says. “But I wanted to keep things quiet because it was hard enough, even though you know everyone really does care about you. People had no idea how hard it was for us, or how heartbreaking.”

Father Dwight appreciated the couple’s desire to become parents. Though Kim and Dave had undergone an introduction to natural family planning (NFP) as part of their marriage preparation, they didn’t know that NFP also is a solution for those experiencing infertility. He told them about the Creighton Model, and offered to find a consultant for them in Michigan.

The Creighton Model, so named because it was developed at the Creighton University School of Medicine by Dr. Thomas W. Hilgers, is a natural fertility tracking system that collects relevant data allowing couples to achieve or avoid pregnancy. More recently, the Creighton Model has been used with NaProTECHNOLOGY, or natural procreative technology, a new system that helps women reach their optimal state of reproductive health.

The Hunts learned more about the system through Georgia Schmitz, a Creighton Model instructor based in Lowell, Mich.

“We met with Georgia on Mothers’ Day. She is a nurse and also uses the system, and she was just amazing and so helpful. It’s a little bit complicated to understand and takes a lot of commitment to use this system, but she let us call her at all hours to ask questions as we got started,” Kim says.

Georgia also referred the couple to Dr. Nickole Bazger, an obstetrician and gynecologist in Southeast Michigan, who completed a one-year fellowship in Medical and Surgical NaProTECHNOLOGY, and whose practice includes teaching and advocating for natural methods of family planning and optimizing fertility.

Kim and Dave began working with the Creighton Model to track her physical symptoms. Initially, Dave’s job was to handle the charting, “but I was fired,” he jokes, thanks to conflicts in his schedule as the managing partner in a family-owned restaurant business. “I wasn’t always home in time to record the information.”

After a few months of tracking but no pregnancy, Dr. Bazger recommended that Kim undergo a laparoscopy to rule out possible causes of infertility. But Kim had recently begun a new position with a local school district, where she teaches physical education and works in school counseling. She delayed the procedure until the fall of 2013, scheduling it for November. During the interim, Dr. Bazger and the Hunts agreed to begin medical therapy with cooperative progesterone replacement.

“I had gone through the whole pre-operative registration process on the phone, and then I mentioned to the nurse that I happened to have taken a home pregnancy test that morning and got a faint pink line. She told me to hang up and call Dr. Bazger right away,” Kim recalls.

Sure enough, Kim was pregnant. Further tests showed she needed continued progesterone support to maintain a healthy pregnancy. Coordinating care with her Lansing obstetrician, the Hunts have seen Dr. Bazger twice during the pregnancy to follow the baby’s progress.

The process that led the Hunts to this point was marked by medical and scientific concerns, but, in the end, it’s all about the child who will soon take up residence in her pink nursery, surrounded by Minnie Mouse accessories chosen especially for her by her already-doting parents.

“The first time we met Dr. Bazger, she mentioned that we speak in scientific terms, but that there is something greater at work in this process,” Dave says. “We can clearly see that God has brought us to this point.”

Baby Hunt – her name remains a secret until her birth – will join a large, loving family. “She will be the third grandchild on my side, but the first girl,” Dave says.

Their families will help them with child care when Kim returns to teaching in the fall.

“We already look back and laugh,” Kim says, “when we realize that the solution was so simple.”

“All it took was connecting the dots for us,” says Dave.

And in the end, connecting those dots created the picture of a child designed by God especially for Kim and Dave.