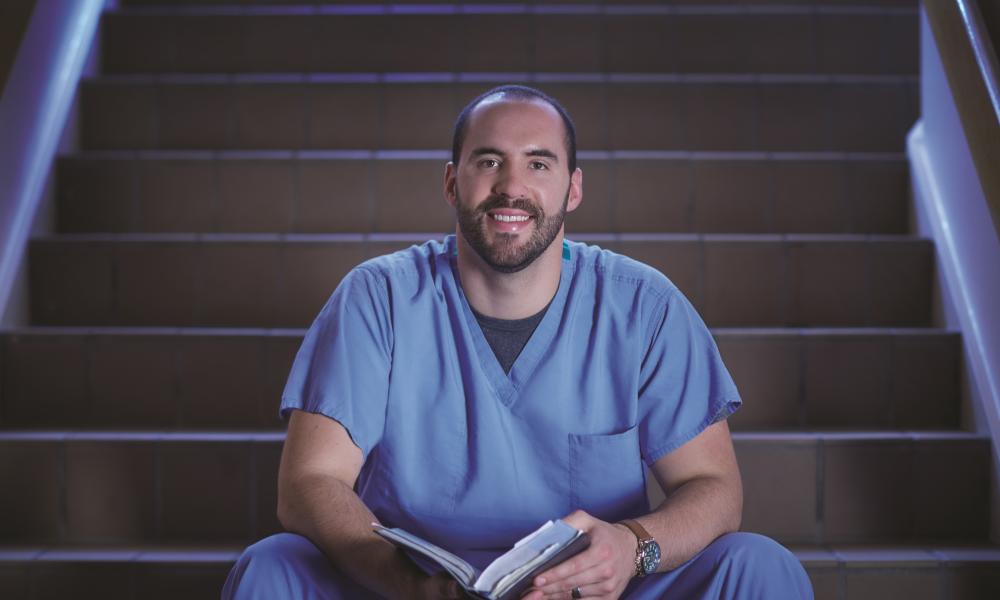 From 'faith, family and football' to med student

Ethan Ruhland lost all four grandparents in a nine-month period while he was in college. While grieving, he began to doubt God’s love and presence. Yet from those days of questioning came a realization that God was, in fact, at work in his life. Ethan credits God’s grace through his grief, his then-girlfriend (now wife) Jacqueline’s prompting to go to Mass and his experience on the Michigan State football team for his renewed relationship with God. That relationship is now the driving force for him as a faithful Catholic, husband to Jacqueline, father to baby son Liam and physician – newly graduated from Michigan State’s College of Osteopathic Medicine.

Ethan says, “As difficult as it was, I’m thankful for that period of grief. I was angry and maybe even rebellious, but I was questioning, and eventually my questions led to real answers. At one point, Jacqueline said, ‘We’re going to church - we need to be at Mass.’ At church, I would listen to what the great priests at St. John Student Center in East Lansing said, and it started to make sense.

“At the same time (2008-12), I was playing football for the Spartans, and over and over again I heard coach Mark Dantonio say that the three most important things in their correct order had to be faith, family and football. At the end of every practice and every workout, we knelt together and prayed. It wasn’t something that was pressed upon us or forced, but it was what we did. We expressed gratitude and took time to thank God. Game days always included chapel, which allowed me to remember and focus on what was most important. Quite often after games, we would take a knee with the opposing players and join together in prayer.

“Those simple routines and practices of faith were a catalyst for me in taking my faith seriously, and even now the lessons from those days impact me as I consider going into sports medicine.” Ethan’s years in medical school affirmed his interest in the relationship between faith and science, and helped him see his future in medicine as a new platform to live out his faith.

“Faith and science do not contradict each other. In fact, part of what drew me to surgery was looking at the human body – on the inside – and recognizing how amazing and beautiful it is, and recognizing that this didn’t just happen, this was created.” Looking forward, Ethan says he will rely on his personal faith to guide his medical practice. “I want my faith to play a role in my interactions with my patients. As a believer, I am called to treat every person with respect and dignity. God blesses us as scientists and physicians with tools to use to aid in healing, and there is trust that comes from knowing that. “While God gives us these gifts, it is up to us to use them in ways they are meant to be used to respect the sanctity of life. It is a beautiful thing. And those are just the physical things we can do, then you consider dealing with the person after they come out of surgery – who they are, their reaction to dealing with a traumatic event, their attitude, their spirituality – all which have a huge impact on their healing process. This is a reality that science cannot explain, but it is clear. We can measure chemicals in the brain and see that positivity is linked with better healing, but the basis of those feelings and that strength come from somewhere, and that’s where you see a beautiful undeniable blending of science and faith.

“Patients who find strength in their faith are able to keep a positive attitude especially during hard times, and even at the end of life. When they are rooted in faith, it makes a difference. I have had the opportunity to be with patients through the dying process, and the comfort that you witness in people who trust and know where they are going is a beautiful thing to experience. “I may only meet a patient once, so I need to consider how I can positively affect their life in one meeting. It’s because of science that I have the opportunity, but it is because of faith that I understand it and want to take advantage of every encounter,” Ethan says.