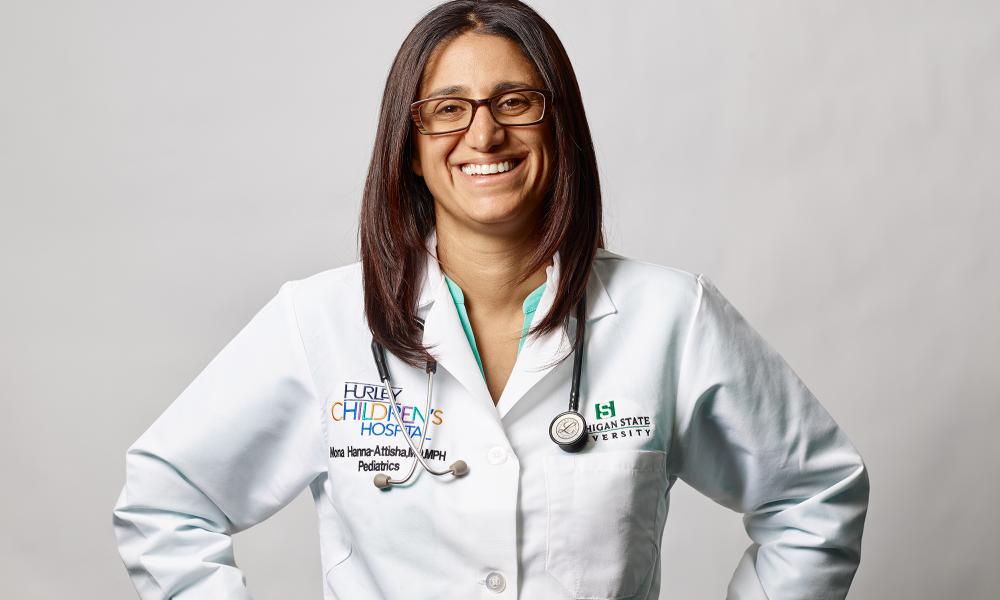 Dr. Mona, the hero of the Flint water crisis

"I was just doing my job"

Dr. Mona Hanna-Attisha, the hero of the Flint water crisis, has carved out 30 minutes from the onslaught of press events and public hearings. Stolen from her duties as Director of Hurley Medical Center’s Pediatric Residency Program and Associate Professor at Michigan State University’s Department of Pediatrics and Human Development, this interview time is precious.

In the narrow, refurbished hospital room that is her office, the coat hooks behind the door are full of clinical jackets, starched to attention and ready for her to jump into action at a moment’s notice. Yet where she sits, Dr. Mona surrounds herself in children’s artwork—some framed, but most simply taped to the walls, the file cabinet and her desk. Behind her computer, photos of her children, family and medical school graduating classes smile back at her from the wall. Between the windows she has hung the Fr. Norman Dukette Award she received from Christ the King parish in Flint.

Suddenly she appears at her door. “Hi, I’m Mona,” she smiles as she comes in for the interview. “Do you think I could get an extra copy of the magazine? My grandma goes to mass every day. I’d love to give her a copy of the story.”

“How does it feel to get all this attention? It’s like a dream. I come home and my husband asks ‘What did you do today?’ I say, ‘Just pinch me. I don’t know if it was real.’ The access, the ability to meet different people –I go to events and people want to take selfies with me! They’re like, ‘Oh, you’re a hero.’ But I’m not a hero. I was just doing my job. This is my job.”

“It’s also what I learned from my family and our Chaldean Community. From my earliest days at Guardian Angels Elementary school, I learned the importance of the Golden Rule and giving voice to the voiceless.

“This story started when I called an old friend and asked her to come to our house for dinner. I’ve known her since we were 13, and now she’s a water expert – one of the few people who know the lead-and-copper rule. Over a glass of wine, we were talking about Flint’s recent switch to river water. She said, ‘Mona, you’re a doctor. You should look into this. There’s probably lead in the water. Can you get data?’ I said ‘Lead?! Yeah, I can get data.’ That night I couldn’t sleep.

“Ironically, the next day I had a meeting scheduled with a County Health Department representative about a grant to provide cleaning supplies to families exposed to lead in dust and paint. I asked him if he was looking into lead in the water, but he said the Health Department has no jurisdiction over water. So I started to dig.

“I’m stubborn and pleasantly persistent. ‘No’ is an impossible word for me. But I’ve also learned that you can’t move mountains without data and science behind you. So I knew I had to prove that lead was in the children’s blood. I tried to open every door I could to get the data.

“Through my network I was able to get the data within two hours. We got our research plan approved in a couple days, and in two weeks of working around the clock our team released its study. It showed that children in Flint were being poisoned by lead, that it had increased, and that it was probably the water.

“When we released our data on September 24, the State of Michigan attacked us. They called me an unfortunate researcher and accused us of causing hysteria. They said their data didn’t match up with our data.

“When the state attacked me, it was jarring. It made me nervous and led me to question my data. For about two hours I felt ill. But we knew we were right. The numbers don’t lie. Lead impacts cognition. It impacts behavior. It has a multi-generational effect, impacting the unborn and babies on formula. There is no safe level of lead.

“And our research and the state’s data underestimated the exposure! Lead only stays a short time in the blood, then it gets stored in the bones—especially for those whose nutrition was poor before exposure. When you are stressed, or pregnant, it comes out of the bones and causes that neurotoxicity all over again. It’s the worst. That’s why it’s never supposed to be in a child.

“Knowing this, you fight for these kids. I felt it was my professional responsibility. It was my responsibility as a human being who had a voice to use that voice. So we fought back through the media, answering their attacks, explaining why we were right. It wasn’t easy but it was my job. It was what I was supposed to do and what I was meant to do.

“After about two weeks, Dr. Eden Wells, the chief medical executive for the State of Michigan, called. She and I had done an immunization event together, so she knew me. She knew I had a public health background. She knew I was credible. That was the game-changer for the state to take another look at their data. On October 2, they held a press conference and said we were right.

“Flint had this disaster, and it is a population-wide disaster. We cannot sit back and watch the consequences of lead poisoning. So we are flipping the story by building a model public health program, called the Pediatric Public Health Initiative, to help these kids. Michigan State University and Hurley Medical Center are wrapping the children of Flint in evidence-based interventions that promote child development such as early literacy programs, universal preschool, nutrition assistance, access to school and behavioral health services.

“There’s lots things people can do. Red Cross is mobilizing volunteers to go door-to-door handing out water or educational materials. The water is a lot better than it used to be, but it still is not safe. It’s like drinking through a lead-painted straw. You never know when a chip of that lead is going to come off. But we have so much bottled water we need to store it at an Airforce base. Instead of buying more water, contribute to Catholic Charities of Genesee County, or the Flint Child Heath and Development Fund at www.flintkids.org. This is our ‘tomorrow fund,’ providing services to help today’s children grow up healthy.

“Most importantly, people need to keep talking about Flint. It’s sad that it took non-government people to do something when, for 18 months, mothers, spiritual leaders, and others were publicly raising their voices and being silenced. Their concerns fell on deaf ears of public servants who refused to listen. This can’t happen again.

There's an app for that!

Michigan State University and WKAR-TV has developed an app to help people find water and nutritional resources in Flint. For information; http://www.tinyurl.com/zlsrnxo