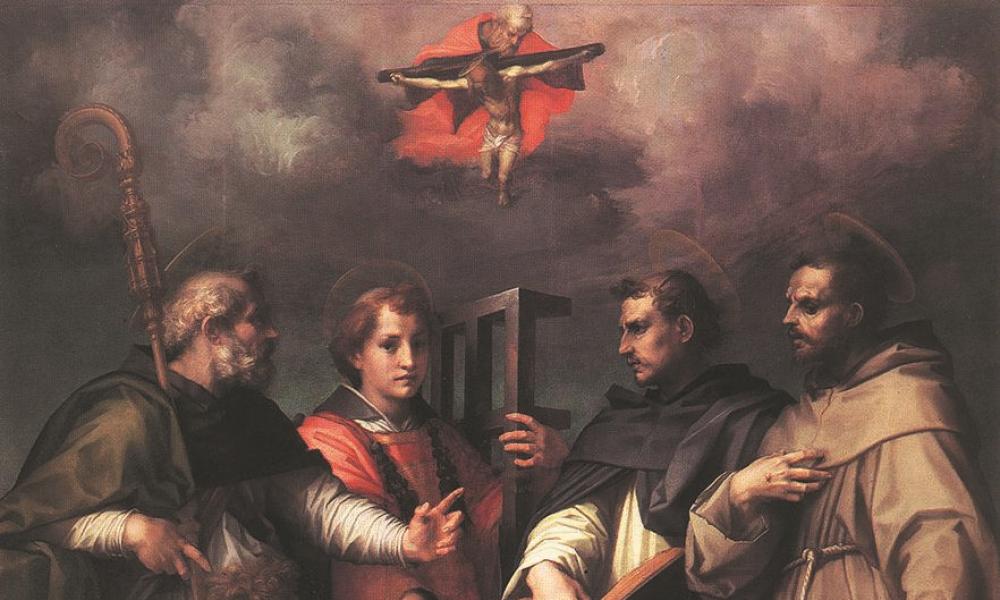 The creed Part 1: What do we believe?

What do we believe? It’s really not that hard to answer: the Creed

Have you ever been asked ‘what do Catholics believe?’ and struggled to know where to begin?

In reality, we shouldn’t find it an effort, because the Creed(s) tells it all. Well, perhaps not all, because we do have such a rich expression of our tradition through Scripture, Tradition, liturgy, prayer, dogma, doctrine, theology, sacraments, symbols, values, ethics and laws, spiritualities, models of holy people, songs, music, dance, drama, art, architecture, festivals and feasts, and holy places. But the Creed does summarize for us the essence, the core, of our belief.

The simple declarative sentence, “Jesus is Lord,” is a miniature creed, that is, a statement or profession of  belief. The Church has issued some official creeds, most notably the Apostles’ Creed and the Nicene Creed, both of which expressed the faith of the early Christian communities. Their faith remains our faith today.

The word creed comes from the Latin credo, which means “I believe.” What Christians really proclaim is, “We believe.” We do not invent our own faith;  we receive it from God through the Church. Just as doctors may take a Hippocratic Oath binding them into a community of healers, so our praying of the creed unites us to our sisters and brothers as a community of believers.

It is important to keep in mind that the translation into “I/we believe” is active which denotes not just a body of beliefs but a profession of faith. This faith is trust;  not “I believe that” (although that certainly is included), but “I believe in.”

An ancient tradition held that on the day of Pentecost, the Apostles composed this Creed under the guidance of the Holy Spirit, each apostle writing one of the twelve articles of the Creed. Even though scholars now believe that was not the case, it has always been considered a true summary of the beliefs of the apostles themselves.

Its origin (around 215) was the profession of faith used in the instruction of catechumens and the liturgy of Baptism. The person to be baptized responded to three questions, divided according to the Persons of the Trinity.

The clearly Trinitarian structure was likely intended to counter some early teachings (by Marcion) that denied that the God of the Old Testament was the same God revealed in Jesus. This Trinitarian formulation would remain the basic structure of all the early creeds.

The Apostles’ Creed is used by Catholics, Anglicans, and many Protestant Churches. Orthodox Christians do not disagree with any statement in Creed, but they do not use it since it does not have the authority of an ecumenical council.

Nicene Creed: came about to settle a disagreement

For centuries, Catholics have been professing their faith during Mass by proclaiming the Nicene Creed. This Creed clearly formulates essential Christian doctrines about God the Father, Son, and Holy Spirit, the church, salvation, and human destiny. It resulted after decades of controversy begun by a learned Egyptian priest, Arius, who denied that Jesus, the Son, always existed with the Father. In effect, Arius denied Jesus’ divinity and, therefore, the Church’s developing understanding of the doctrine of the Trinity.

The controversy caused extreme dissension in the Church. As a result, the Emperor Constantine convoked the first ecumenical council at Nicaea in 325. A major achievement of this council was to clearly declare the divinity of Jesus by issuing the Nicene Creed.

The second ecumenical council, Constantinople (381), expanded and confirmed it as did the Councils of Ephesus (431) and Chalcedon (451).

The Nicene Creed is used by Catholics, Anglicans, many Protestants, and the Eastern Orthodox (although they reject the ‘and the Son’ clause which affirms that the Spirit proceeds from the Father and the Son).

The Catechism of the Catholic Church follows the Apostles’ Creed in its presentation of the faith (with constant reference to the Nicene Creed, which is often more explicit and more detailed).  In our subsequent articles here we will follow the same format of using the main articles contained in the Apostles’ Creed as our study and reflection.

Are the Creeds Biblical?

Creeds in the developed sense do not occur in Scripture. Yet, this does not put them in antithesis to Scripture, for creeds have always been meant to express essential biblical truths. At the same time, Scripture itself offers some rudimentary creedal forms that provide models for later statements.

The first creeds were probably in the context of baptism. A creed offered the candidates the opportunity to make the profession called for in Romans 19: 9-10. At first the form of words would vary, but familiar patterns soon began to develop, using a Trinitarian question and answer format.

Because of the baptismal profession of faith, creeds soon came to serve as the syllabus for catechetical instruction in Christian doctrine. All candidates were expected to acquire and display some understanding of the profession of faith they would make. A sincere commitment was coupled with intellectual apprehension.

The rise of heresies helped to expand the first creeds into the more developed formulas. A phrase like “maker of heaven and earth” was probably inserted to counteract the Gnostic separation of the true God from the creator, while the reference to the virgin birth and the stress on Christ’s death safeguarded the reality of Jesus’ human life and ministry. The Arian heresy produced additions (notably “of one substance with the Father”) designed to express Christ’s essential deity. These modifications gave the creeds a new function as key to the proper understanding of Scripture and as tests of orthodoxy for the clergy.

Being used in baptism, creeds had from the very beginning, a liturgical function. It was seen, however, that profession of faith was a constituent of all true worship. This led to the incorporation of the Nicene Creed into the Eucharist, first in the East, then in Spain, and finally in Rome. Placing the creed after the reading of Scripture made it possible for believers to respond to the Gospel with an affirmation of faith.

Our Traditions – Who decides all this? What is a council?

The history of the Nicene Creed comes from the Church’s early ecumenical councils. We have just celebrated (Oct. 11, 2002) the 40th anniversary of the beginning of the Second Vatican Council (left). Just what is an ecumenical council?

An ecumenical council is the gathering of all the bishops of the world as opposed to regional or local gatherings. According to current Church law, only the pope calls this type of council, and he alone sets its agenda. Acts of the council are binding when approved by the pope and the body of bishops and officially proclaimed by papal authority.

Roman Catholics consider there to have been 21 such councils. However, the only councils accepted as truly ecumenical by both the church of the East and the West are the first seven. The first four councils (Nicaea, Constantinople I, Ephesus, and Chalcedon) are recognized as normative for all churches that confess the Nicene and Apostles’ creeds, and the decrees of those four councils form the basis for ecumenical dialogues.