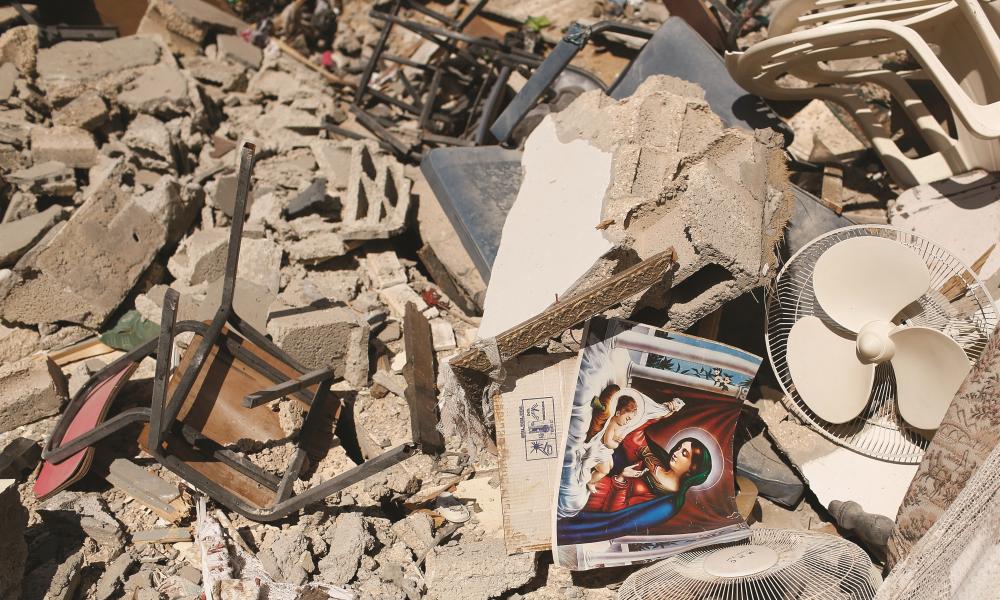 Christians in the Crosshairs

Today, Christians are the most persecuted religious group on the planet. Two years ago, the National Catholic Reporter pointed to a Pew Forum estimate that Christians face persecution in a staggering total of 133 countries, representing two-thirds of all nations on earth. In the same period, the Reporter stated that the German-based International Society for Human Rights, a secular organization, estimated that 80 percent of all acts of religious discrimination in the world are directed against Christians. In all, some 150,000 Christians are killed for their faith each year, according to both the Catholic relief agency Aid to the Church in Need and the evangelical group Open Doors. It should come as no surprise, then, that the current conflicts in the Middle East have once again put Christians in the crossfire.

On Aug. 11, the Associated Press reported that a new 72-hour cease-fire agreement had been brokered as negotiators from Israel and Hamas resumed talks to reach a long-term truce in the Gaza Strip and put an end to a month-long war. A similar truce had fallen apart the previous Friday when militants resumed rocket fire directed toward Israel.

The fighting had intensified in the wake of the kidnapping and murder of three Israeli teens by Hamas operatives, according to Israel. On July 2, one day after the funeral of the teens, a Palestinian teen was killed, allegedly by Israelis seeking vengeance. Rockets were then launched into Israel, which then retaliated in kind. Recent estimates indicate that more than 1,900 Palestinians and 67 Israelis have been killed thus far.

The Christian communities in both Gaza and Israel find themselves caught in the middle of this conflict. An estimated 1,000 Israeli airstrikes have been launched into the Hamas-controlled Gaza Strip, where around 1,000 Christians live alongside almost 2 million Muslims. Meanwhile, Michele Chabin of the National Catholic Register chronicles that more than 350 Palestinian rockets have hit areas where Christians live in Israel.

Iraq has suffered from political instability since the withdrawal of U.S. troops in 2011. As the “Arab Spring” continued to blossom throughout the Middle East, Iraqi Sunnis, the overwhelming majority of the population, became more vocal against the Shiite-dominated government. Levels of violence within Iraq continued to increase through 2013.

In 2014, the brutal Sunni terrorist group the Islamic State of Iraq and the Levant (ISIL), or the Islamic State of Iraq and Syria (ISIS), seized control of several major Iraqi cities, displacing hundreds of thousands of people. On Aug. 8, CNN reported that ISIL had overrun Iraq’s largest Christian town, Qaraqosh, while Reuters indicated that the group had gained control of eastern Syria, crucifying two people and executing 23 more along the way.

Many Christians and other minority groups had fled to Qaraqosh from Mosul when that city fell into the hands of ISIS. In Mosul, ISIS issued an ultimatum to Christians living there to convert to Islam, pay a fine or face death.

While Kurdish forces continue to resist the advance of ISIS in northern Iraq, the U.S. has recently launched airstrikes and initiated air drops to the thousands of stranded religious minorities, mainly Yazidis, who are hiding from ISIS in the mountains outside the fallen city of Sinjar.

Pope Francis has repeatedly expressed his concerns over what is taking place in the Middle East. While 97 percent of Iraq’s 36 million inhabitants are Muslims, the majority of Iraqi Christians are Chaldeans, who are in full communion with the Roman Catholic Church. The pope has appealed for “all necessary help” to be given to those who have been forced to leave their homes and “whose fate depends entirely on the solidarity of others.”

On Aug. 10, Pope Francis told pilgrims in St. Peter’s Square, “The news coming from Iraq leaves us in dismay and disbelief.” The pope also commented on the renewed violence in Gaza, stating that it “cuts down innocent victims and only worsens the conflict between Israelis and Palestinians.”

Pope Francis sent his personal emissary and the former Vatican ambassador to Baghdad during the Iraq War, Cardinal Fernando Filoni, to Iraq on Aug. 11 to reassure “those dear suffering populations.”

At home, the U.S. Conference of Catholic Bishops (USCCB) issued a letter to Congress on July 23, 2014, urging the United States to work for a cease-fire in the Gaza-Israeli conflict as the fighting had forced Catholic Relief Services to suspend its operations in Gaza. This followed an earlier letter to President Obama from Archbishop Joseph Kurtz, president of the USCCB, in which the position of the Conference was laid out as follows: “For decades our conference has urged U.S. leadership for peace. Our conference continues to support a two-state solution to the conflict, a secure and recognized Israel living in peace with a viable and independent Palestinian state. We recognize the legitimate aspirations of the two peoples and three faiths who share this land that is holy to us.”

The USCCB also has been vocal with regard to the situation in Iraq. Last month, the conference urged Ambassador Susan Rice, President Obama’s national security advisor, to act to secure U.S. humanitarian intervention in Iraq.

– Pope Francis, Sunday Blessing, Aug. 10, on the crisis in Iraq

By the Numbers – Christians in Iraq

- 100,000 Christians thought to have fled ISIS toward Iraqi Kurdistan (BBC)

The Gaza Strip is a Palestinian region located on the eastern coast of the Mediterranean Sea. Gaza borders Egypt to the southwest and Israel to the north and east. The region is about twice the geographical size and population of Washington, D.C.