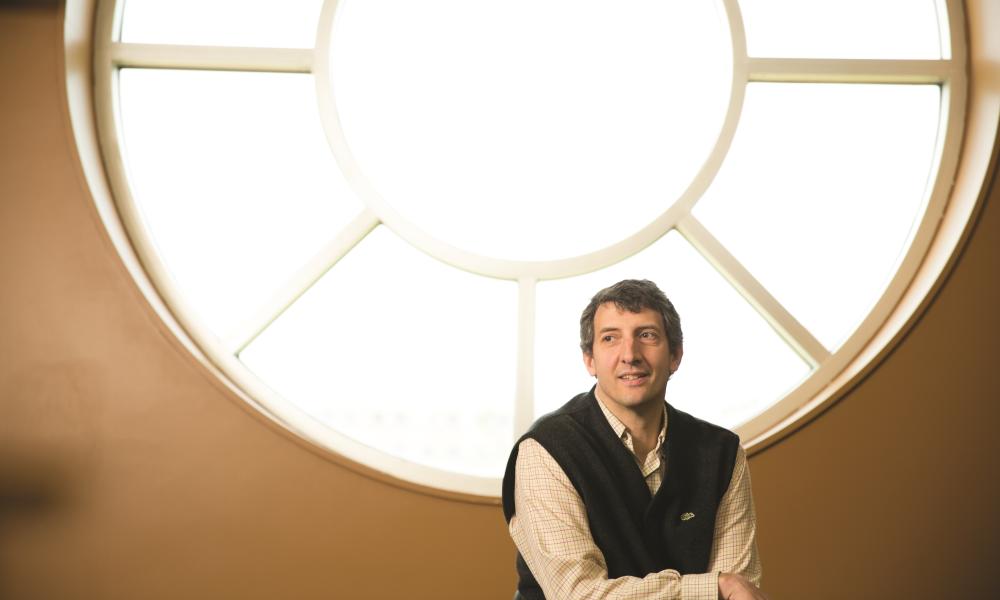 Carl embraces both faith and science

Before 1665, people viewed sunlight as pure white. That year, Cambridge student Isaac Newton experimented with prisms to reveal there was more to sunlight than we had seen. In fact, by proving that all the colors of the rainbow reside in every ray of clear sunlight, Newton opened pathways to better understanding our world and universe. He literally took our thinking from black-and-white to technicolor.

MSU Materials Science and Engineering Professor Carl Boehlert understands that science can be used to reveal the natural order of our world. Deacon Carl Boehlert also appreciates that faith can help to make sense of our worldly experiences. He uses both science and faith in his work to serve others.

“I’m a deacon and an engineering professor, so every now and then someone will ask me how I do both. They seem to see a conflict between the two identities, but I do not.

“It’s not a regular thing that religion comes up at work. I sometimes talk to Christian people here in the College of Engineering and sometimes we share a lot of the same thoughts. But I also discuss issues with other colleagues whose religious beliefs I don’t know. Our conversations are every bit as good and respectful – just different.

“I know scientists sometimes have a reputation of being atheists or nonbelievers. But in my experience, I don’t think science is in opposition to faith. Some of my colleagues are active members of my home parish, St. Martha’s [in Okemos], and other Catholic parishes in the diocese. Several others practice different religions.

“I recently attended a national materials science and engineering conference in San Diego at the start of Lent. I began with morning Mass on Ash Wednesday and went through the day with an ash cross on my forehead. Before I gave my first of two presentations that day, one of my colleagues gently pulled me aside to let me know kindly that I had something on my forehead,” Carl laughs.

I was the only person I saw with ashes all day, but never got a negative reaction from any of the 4,000-plus conference registrants there. At the end of the day, one man even stopped me and asked if I knew where he could find a Catholic Church. I said ‘Sure!’ and gave him directions.

“As an engineer, I am service-oriented. That’s what engineers do – we solve problems. It makes us feel good when we see our work brighten others’ lives. Especially when we’re teaching or making discoveries that can light the way for future generations.

“Many of my colleagues and I share our time generously with others because it makes us happy, and it hopefully serves others well. As people see you living your beliefs, acts of kindness can inspire others to explore and follow Jesus’ teachings. Jesus was the greatest moral teacher of all time, and I also believe Jesus was the Son of God.

“For some scientists, like anyone, their faith may be dormant for a while. But I think when pain comes into life, we all want to believe there is a higher power who can help us or our loved ones face that pain.

“At the other end of the spectrum, some people’s faith falters when tragedy hits. They ask: ‘If there was a God, why would God let this happen?’ As a deacon, I face this at times, and my honest answer is, ‘I don’t know.’ It’s sometimes not very comforting, but I’m not going to lie. People are intelligent. They form their own opinions and can tell if you’re trying to dictate or manipulate them into believing a certain way.

“As a scientist, I look for truth, and I try to substantiate my claims with evidence backing them up. When people are in doubt or grief, they need to go through their experience, not simply accept something I make up to try to comfort them. Sometimes all I can say is, ‘My logic isn’t the same as God’s.’

“We often assign or try to find reasons for why things happen to work out the way they do. My role is not to provide explanations, but to support others as they search for and discover answers for themselves. This has happened in my own life.

“In high school, I felt God may have been calling me to the priesthood, but I didn’t seem to listen. I went away to college and, because I was interested in math and science, I pursued an engineering degree instead. “Many years after earning my Ph.D., marrying my wife, Paula, and becoming a parent, I was listening to a homily in which our pastor said the parish could use deacons to help with various duties, but we had none. It was like a spotlight was focused on that calling I had kept in the back of my mind since high school. “I went home and told my wife I thought I was being called. She said something like, ‘That’s nice,’ and kept preparing dinner. I then went to the computer and googled ‘Diocese of Lansing Diaconate Program.’ One of the first entries was a link for a man named David Rosenberg, and I found a phone number to reach him. “I held onto his number for a day, then summoned the courage to cold call him. I was literally shaking as I dialed, asking myself why I was doing this! I wondered if he would just hang up on me, but he was so gracious. He immediately put me at ease. He told me he loved the diaconate program so much he was planning to enter the seminary to become a priest. Then he encouraged me to contact Sister Marilyn Barnett to get more information about the diocese diaconate program. That was the start of a seven-year process of classes and formation. “I think God speaks to us in many ways, including through others and through our world. When we spend time in prayer, we can strengthen our connection and ability to see what God wants us to do. I feel blessed that I can try to help people through both science and through religion and faith. “I’ve heard theology described as ‘faith seeking understanding.’ I get to apply both scientific and religious principles to understanding our world and to helping people walk in the spectrum of God’s colorful light. Who can see a conflict in that?”