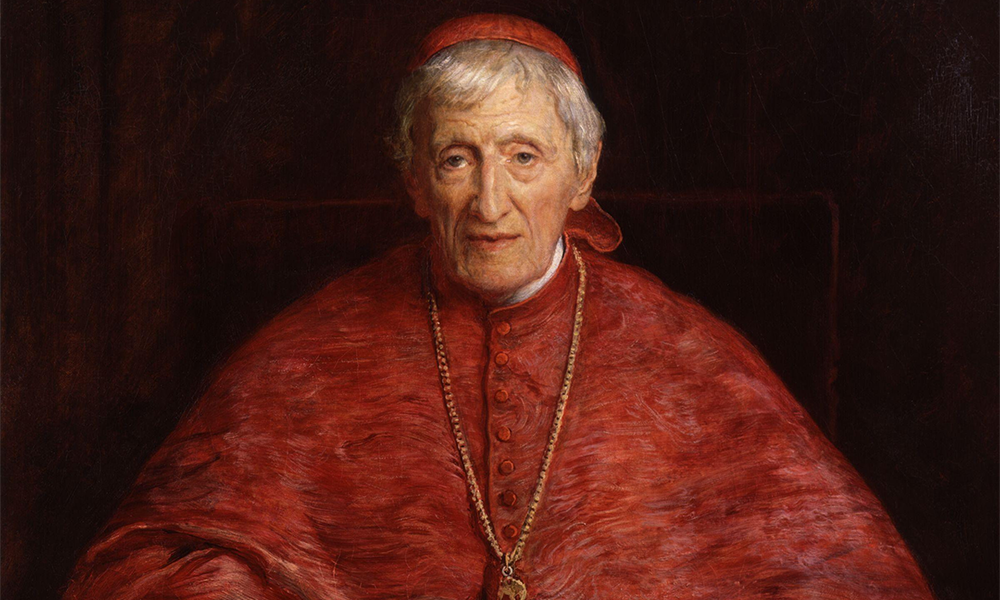 John Henry Newman, one of the leading Roman Catholic and Anglican theologians of the 19th century, will be canonized Sunday, October 13. His search for truth and writings on his beliefs were instrumental in changing the definition of religion in his time and beyond. Cardinal Newman will be the first English citizen to become a saint in the Roman Catholic Church since the 17th century.

In his 40 books and more than 20,000 letters, Cardinal Newman expresses a strong belief in the importance of a personal relationship with God. His writings inspired hundreds of Anglican clergymen to join the Roman Catholic Church in the 19th century and influenced the work of the Second Vatican Council in the 20th. In his memory, Newman Centers were first established to serve Catholic students at non-Catholic universities in 1888 and continue serving students around the world today, including on more than 2,000 U.S. campuses.

Born in London, England on Feb. 21, 1801, Cardinal Newman experienced “an inward conversion” at age 15 that he described “as more certain than that he had hands or feet.” Following graduation from Trinity College of Oxford, he was ordained an Anglican priest in 1821. As the vicar of the university church, St. Mary the Virgin, for 17 years, Cardinal Newman became a popular pastor, poet and preacher and a highly regarded theologian.

Cardinal Newman led the Oxford Movement in an effort to reconnect the Church of England with its origins by studying the writings of the first Church Fathers. His research convinced him that the Roman Church was the original Church established by Christ. His preaching and writing of the Tracts for the Times promoting Catholic teachings and rituals created intense hostility from some Anglican clergy. In 1841 the bishop of Oxford suspended him from publishing the Tracts. Cardinal Newman resigned as editor of the British Critic.

Cardinal Newman left Oxford in 1842 and was formally received into the Catholic Church on October 9, 1845. Ordained a priest in October of 1846 in Rome, he returned to England where his lectures against anti-Catholic rhetoric led to charges of libel. When found guilty, his many supporters raised funds that exceeded the cost of the fine and his legal expenses.

In 1854, Cardinal Newman became rector of the new Catholic university in Dublin where he completed some of his most effective writing. Named a cardinal in 1879, after refusing to be named a bishop, he chose “Cor ad cor loquitur” – “Heart speaks to heart” as his motto.  Cardinal Newman died of pneumonia in Birmingham, England on August 11, 1890.

Thousands of the faithful lined the streets of Birmingham, England for the funeral procession of their much-loved priest.

Education was a passion of Cardinal Newman. He considered universities and the Church dedicated to the same goal: the pursuit of truth.

Several of Cardinal Newman’s works were published for collegiate study and his sermons were used as models for homiletics.

“Newman Prayer Books,” including passages from his writings, were published as devotionals.

According to the Encyclopedia Britannica, practically all English converts from 1845 until the mid-1900s credit Newman partly responsible for their conversion.  Catholics comprised less than 1% of England’s population in 1800.

The hymns “Lead, Kindly Light" and "Praise to the Holiest in the Height" were written by Cardinal Newman. His poem, “The Dream of Gerontius” was set to music in 1900.

“Your life displays Christ without your intending it. You cannot help it. Your words and deeds will show on the long run, where your treasure is, and your heart.”

“I sought to hear the voice of God and climbed the topmost steeple, but God declared: "Go down again - I dwell among the people.”

“Evil has no substance of its own, but is only the defect, excess, perversion, or corruption of that which has substance.”

“The love of our private friends is the only preparatory exercise for the love of all men.”

“With Christians, a poetical view of things is a duty. We are bid to color all things with hues of faith, to see a divine meaning in every event.”

“God has created all things for good; all things for their greatest good; everything for its own good. What is the good of one is not the good of another; what makes one man happy would make another unhappy. God has determined, unless I interfere with His plan, that I should reach that which will be my greatest happiness. He looks on me individually, He calls me by my name, He knows what I can do, what I can best be, what is my greatest happiness, and He means to give it me.”

“A university training is the great ordinary means to a great but ordinary end; it aims at raising the intellectual tone of society…It is the education which gives a man a clear conscious view of his own opinions and judgments, a truth in developing them, an eloquence in expressing them and a force in urging them.” ― The Idea of a University

“Let us put ourselves into His hands, and not be startled though He leads us by a strange way, a mirabilis via, as the Church speaks. Let us be sure He will lead us right, that He will bring us to that which is, not indeed what we think best, nor what is best for another, but what is best for us.”

Lead, kindly Light, amid the encircling gloom,
Lead thou me on!
The night is dark, and I am far from home,–
Lead thou me on!
Keep thou my feet; I do not ask to see
The distant scene,–one step enough for me.

I was not ever thus, nor prayed that thou
Shouldst lead me on:
I loved to choose and see my path, but now
Lead thou me on!
I loved the garish days, and, spite of fears,
Pride ruled my will: remember not past years.

So long thy power hath blessed me, sure it still
Will lead me on;
O’er moor and fen, o’er crag and torrent, till
The night is gone;
And with the morn those angel faces smile
Which I have loved long since, and lost awhile.

God has created me to do Him some definite service.
He has committed some work
to me which He has not committed to another
I am a link in a chain, a bond of connection
between persons.
He has not created me for naught.
I shall do good.
I shall do His work.

Also being canonized on October 13:

Sister Mariam Thresia of India founded the Congregation of the Sisters of the Holy Family. Born in 1876, she was a member of the Syro-Malabar Rite of the Catholic Church and began practicing intense prayer and fasting as a young child.  The members of her order devoted their lives to prayer and penance while caring for orphans and the sick and poor and educating girls. She was declared venerable on 28 June 1999 and was beatified on 9 April 2000 by Pope St. John Paul II in Rome.

Sister Dulce Lopes Pontes of the Congregation of the Missionary Sisters of the Immaculate Conception of the Mother of God is remembered as the Good Angel of Brazil. Born in 1914 into a family dedicated to serving the poor, Sister Dulce helped organize the first Christian labor union in her community and opened a public school for children of workers.  With her father’s guidance, she founded the Charitable Works Foundation of Sister Dulce, one of the most eminent healthcare organizations in Brazil. Sister Dulce was nominated for the Nobel Peace Prize in 1988. 70,000 people attended her beatification Mass in 2011.

Marguerite Bays of Switzerland, was of the Third Order of Saint Francis of Assisi. A humble seamstress who dedicated her life to God and helping the poor, Marguerite was born in 1815 in rural Fribourg and died in 1879.  She was miraculously cured of bowel cancer in 1854 after asking the blessed Mother’s intercession and received the stigmata a short time later.

The Path to Sainthood at a glance…

The current procedure for causes of beatification and canonization can be found in the apostolic constitution Divinus Perfectionis Magister, promulgated by Pope John Paul II in 1983. The various stages leading to canonization are as follows:

Servant of God – The process can begin after at least five years have passed since the death of the candidate. It involves a diocesan-level investigation into the candidate’s exercise of Christian virtues considered heroic. At this point, the candidate can be called Servant of God.

Venerable – The investigation is passed on to the Congregation for the Causes of Saints in Rome. After a summary report obtains the necessary votes of nine reviewing theologians, the cause is passed on for examination by cardinals and bishops of the congregation. A recommendation then is made to the pope that he should issue a proclamation of the candidate’s heroic virtue. From the point of the pope’s proclamation, the candidate is referred to by the title of Venerable.

Blessed (Martyrs) – In the case of a martyr, the prefect of the Congregation presents the results of the investigation to the Holy Father, who gives his approval and authorizes the Congregation to draft the relative decree of beatification. The public reading and promulgation of the decree of beatification grants the candidate the title of Blessed.

Blessed (Confessors) – If the candidate was not a martyr but rather a confessor who died peacefully after a life of heroic virtue, a miracle attributable to the intercession of the candidate after his or her death is necessary. If the miracle is verified, a second decree is promulgated, with the decree on heroic virtue, which grants the candidate the title of Blessed.

Saint – In order for the Blessed to be canonized and acquire the title of saint, another miracle is required and must have occurred after his or her beatification.