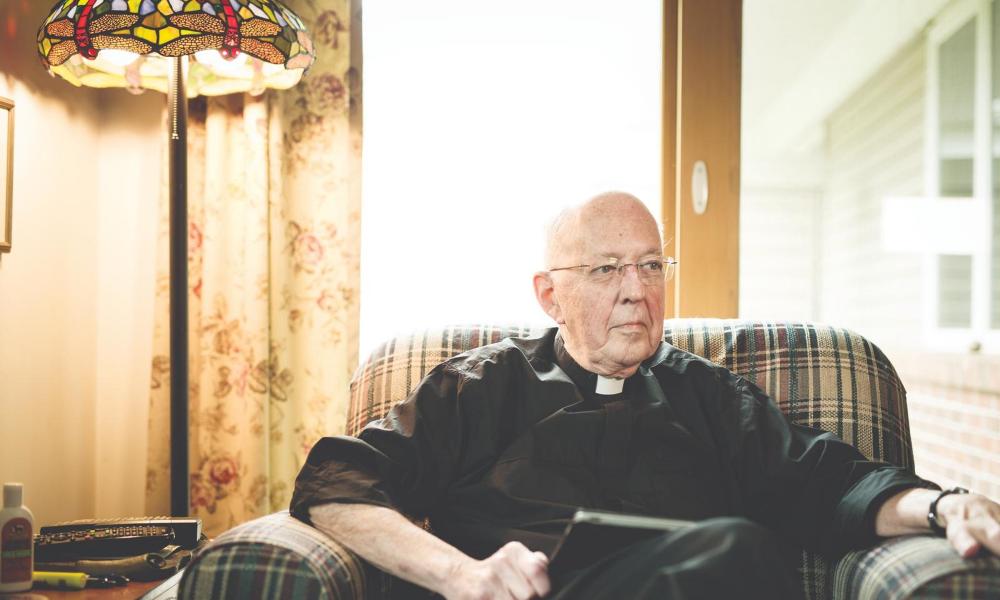 50 years as a priest

May 1, 2017 – This is Father Dwight Ezop, and I am joined by Father Charles Irvin, and we are sitting here at his dining room table in his condominium on the grounds of St. Francis Retreat Center. We are anticipating Father Charlie’s 50th anniversary and ordination as a priest of the Diocese of Lansing.

Father Dwight: So first let me begin, Father Charlie, by simply saying congratulations on 50 years as a priest.

Father Charlie: Thank you, I never thought it possible.FD: I was just thinking. We have known one another for 30 years this year, if you can believe that. I joined St. Francis in 1987 when you were the new pastor there. I joined the parish in September 1987, and you would have arrived at the parish at the end of June, first part of July.

FD: What was it like to grow up in Ann Arbor?

FC: Ann Arbor has quite a history to it. When I was a little boy, it was a typical Midwestern town with maybe 35,000 permanent residents.

FD: I know that during the course of your 50 years as a priest, there is a great deal you have experienced. I want to start with joy. What were some of the joys you have known?

FC: Children receiving first Communion. Children, “period.” Young married couples, couples who have fallen in love and come to me to perform their marriage. I think one of the greatest joys I have had has been the response of people when you are simply nice to them, and you let them know you care for them and love them.

Another occasion, years ago, I was with a group of priests. We went to Rome and throughout Italy to study early Christian architecture. One Tuesday evening, we got a call from Pope Paul VI’s secretary asking us if we would like to concelebrate with the pope tomorrow in his apartment. If so, we should meet outside the steps of St. Peter’s Basilica at 6:30 in the morning. So, I concelebrated Mass with the Holy Father, shoulder to shoulder. So that was quite a thrill.

FD: As a priest, we often encounter people who are experiencing sorrow. What is it like in those moments?

FC: I think the good news is that Jesus Christ has risen from the dead and death doesn’t have power over us. Offering people the truth, that God will not separate himself from us, as long as we let him stay close to us. Whatever happens is because of our response to his presence.

FC: Four very different types of happiness, joys, successes and all that.

FD: What stands out to you in each of those four different places?

FC: In terms of St. Mary Student Parish, the idealistic views these university students had of what can be. Their willingness to engage the world with all of its defects, and they were not afraid to question.

FD: You were the founding pastor at Holy Spirit, Hamburg. That had to be a completely different experience.

FC: Yes, it was. All of my creative juices came alive and were necessary. I had to find property, a place to say Mass and I had to steal people from the parishes – north, south, east and west. I had no conscience at all. I was a sheep stealer from the beginning, and stole as many souls as I could in order to start Holy Spirit.

FC: I was literally creating something out of nothing. I finally purchased property and we started celebrating Mass in a local VFW hall. On Sunday morning, the men of the parish would go to the VFW hall to clean and set up for church. The pool table became an altar.

FD: There had to be a real sense of excitement for people at that time.

FC: Yes, they all realized they were part of something new and we were going to be different. Of course, the sense of community and family was very strong.

FD: What about St. Francis, the largest of the parishes?

FC: It was a great job trying to manage a parish that had 2,800 families and more than 500 kids in the school – learning how to motivate people and keep it all glued together. It was a wonderful learning experience for me.

FD: You wound down your time at St. Francis in 1997 after 10 years. Then you went off to what you always referred to as a Norman Rockwell portrait of Middle America – St. Mary Parish in Manchester.

FC: Yes, it was. I had 300 families, a bit of a culture change. They were used to having Father decide everything.

FD: I know it was during your time at Manchester that FAITH magazine began to gestate. What was that period like? How did the magazine come about?

I said I can give you a full-color magazine of 24 pages that will transmit formation information, not just facts and data. It will be about evangelization and communications, and I know Father Dwight Ezop, J. Munley and some seminarians at Mundelein who are producing a magazine called The Bridge that is very successful, and we can do it here at the Diocese of Lansing. Bishop Mengeling decided this is what he wanted to do, and a plan for funding was created. The original staff was only four people. We were able to publish and distribute 70,000 issues each month for the Diocese of Lansing and, fortunately, other bishops also were interested in publishing their own diocesan magazine based on the FAITH model.FD: So, you started Jan. 1, 2000, with FAITH magazine for the Diocese of Lansing with a circulation of about 80,000 a month, and now FAITH Catholic publishes 49 magazines for other dioceses and Catholic organizations with a combined circulation of more than 1.9 million. Could you ever have imagined that?

FD: Now, when you look back across 50 years of priesthood, I am sure there were highs and lows – and I am sure there were lessons of things you didn’t want to learn and lessons of things you did want to learn. If you had the ability to get in a time machine as Father Charlie of today and go back and meet Father Charlie of 1967, what advice would you give him?

FC: If you have a dream or a hope, never give up. So in spite of the misfortunes, with God on your side, how can you lose? And you are doing his work.

FD: One final question: How has being a priest for 50 years changed your relationship with God?

FC: Much closer. Being close to God, his closeness to me and my prayer life has become very personal, very intimate and very warm.

FD: So you are a different person?

FD: How do you want to spend the last years of your priesthood?