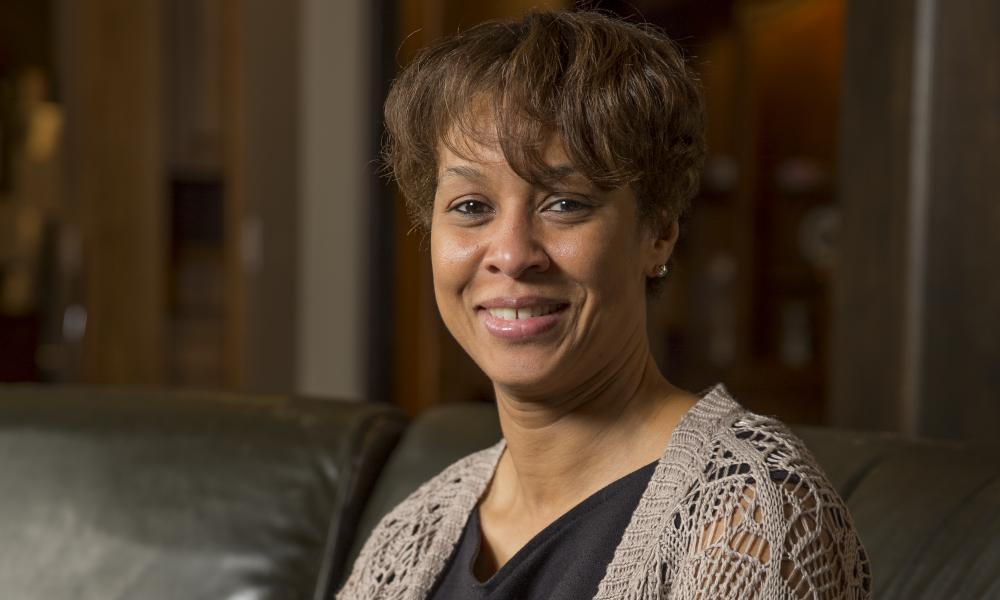 When Danielle's kids became Catholic, she did too

"My father grew up in a small South Carolina farming community – one traffic light and a Baptist church at its center. My grandfather was a deacon in that church, and every Sunday, Daddy, along with Grandma and his two sisters, would attend services and Sunday school as a family. After church, they would return home and gather around the table for a large Sunday dinner.

“Even as adults, as often as they could, my dad and his sisters would come together on Sundays with their spouses and children to sing with the choir, worship with the congregation and eat Grandma’s cooking. I loved Sundays with my dad – especially dinnertime when the family bond was strongest. Sitting there amongst my brothers and cousins with Daddy and Grandma and our aunties watching over us, it felt as if I didn’t have a care in the world.

“My parents divorced when I was young, so I lived with my mother and would visit my dad and brothers during holidays and summer. During the school year, even though we lived miles apart, I thought that if I went to church, we could all be together somehow.

“My daddy’s church is where I came to know Jesus, and grew in my core values – knowing someone was there to help when I needed it. In high school, I realized I had developed a relationship with Jesus. I carried that feeling with me wherever I lived.

“After I graduated and went off to college, my personal drive to do well in my endeavors, the stress of school and the distance from family overtook the connection I had with a church community. As an undergrad at Jackson State University in Mississippi and a veterinary student in Tuskegee, Ala., my need for a church where I would receive the same heartfelt feelings waned.

"After graduation, I moved to Michigan and found a church where I could worship and really feel God’s message like I did growing up – without a lot of fanfare and with a sense of family and belonging. But when the pastor moved on, the church lost its sense of family for me.

“It wasn’t until after I married David and our family started growing that I began to really seek another church home. When my brother Terry passed away 10 years ago, I felt a much deeper need to go to church. While we tried attending a few other churches, that feeling in my heart still wasn’t there. I would keep saying, ‘David, I’m just not feeling this.’ He agreed we would keep looking. But our search didn’t lead us anywhere. Even more, I realized that if we didn’t find a church home, our four children would never have that sense of belonging in a faith family that nourished me as a child.

“David had graduated from Lansing Catholic High School, and always thought his children would attend there, too. When we decided to make a change in our kids’ education, we enrolled the younger two at St. Gerard Catholic School and the twins at Lansing Catholic. When I asked them, ‘What did you learn today?’, their answers really fascinated me. I especially loved learning about the history of the Catholic Church. When we started attending Mass at St. Gerard, Father John [Klein] had me mesmerized. I always wanted to learn the deeper story of whatever he shared in his sermons.

“One day, out of the blue, David said, ‘When I leave Mass, I feel like the weight of the world has been lifted off my shoulders. Refreshed, you know? Like: We can do this! We can do this!’ He brought it up, but what’s funny is that I was feeling the same way.

“When our third-grader, Terryn, came home and announced she wanted to become Catholic, I didn’t object. Many of David’s friends from high school had children attending St. Gerard, and they always made us feel welcome. Terryn’s teacher, Mrs. Prichard, offered to be her godmother. So, in 2015, my baby girl was baptized into the Catholic faith.

“A short time later, my son, Conrad, said he wanted to become Catholic, too. After some thought and prayer, I realized that we had finally found the church home I had been looking for all those years. I enrolled in the RCIA program to join the Church with my three sons.

“At first, I was overwhelmed with the time commitment and the volume of information in the class. But, at the same time, I felt intrigued. Soon enough, Sunday RCIA class routines became my new normal. I learned how and when to pray, developed my faith and beliefs and explored how to live as a Catholic. Near the end of our journey, I attended a retreat with my fellow RCIA classmates. Listening and spending time in contemplative prayer, I felt as if I was going back into my childhood and connecting with how I used to know God.

“When my sons and I were welcomed into the Catholic faith on Easter Sunday 2017, I felt right at home. I’m still developing as a Catholic – still reading the Nicene Creed from the front of the book. But RCIA helped me find my quiet spot where I can check in with God to see what his plan is for me. It opened me up to God’s voice guiding me to what’s most important in life. I strongly feel RCIA helped me get to know myself and others better, and prepared me to better serve my family, church and community.

“While I was enrolled in RCIA, my father suffered a heart attack the week before Thanksgiving. He lingered a few days as we all came home to see him one last time and say our goodbyes. After he passed, we gathered around the table for a bittersweet Thanksgiving dinner before going off in the different directions our lives have taken us. “My father’s legacy was keeping faith and family at the center of life. I want to live like he raised me so my children can build their lives around that legacy too. I have the same family tradition I always valued, but I went a little deeper into my faith and came out Catholic. “There’s something in me that needs to live like I can make my father proud. I think I’m doing that now.”